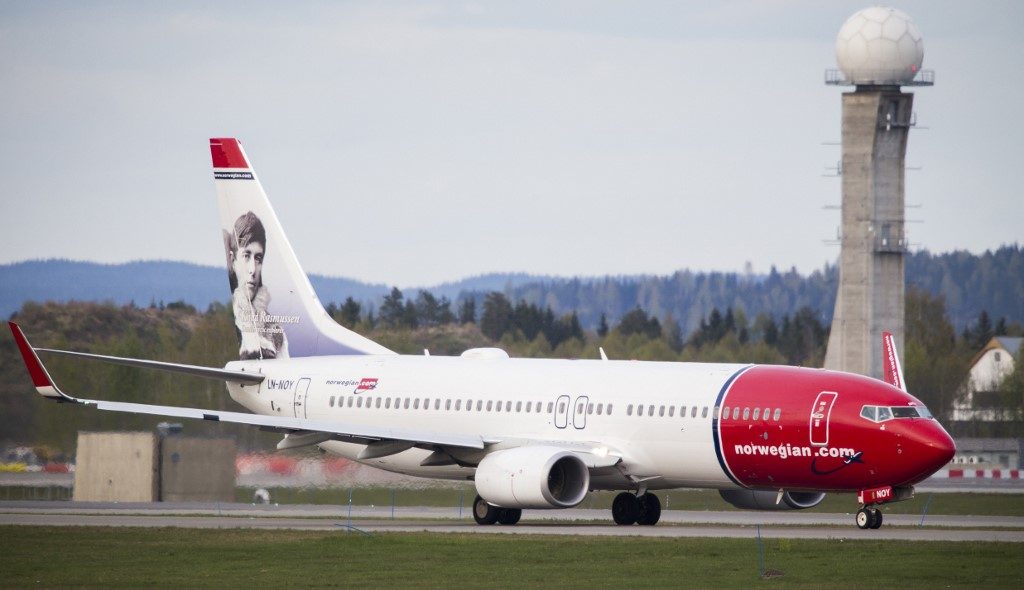 NORWEGIAN AIR SHUTTLE. A Boeing 737-33S operated by Norwegian Air Shuttle on the tarmac at the Oslo Airport on May 2, 2014.

Fighting for survival, low-cost Norwegian Air Shuttle filed for bankruptcy protection in Ireland on Wednesday, November 18, for two of its main subsidiaries in a bid to shield itself from creditors long enough to find a solution for a financial restructuring.

Already saddled in debt before the pandemic, the company, like the rest of the airline industry, has been hit hard by the restrictions aimed at limiting the spread of the new coronavirus.

Europe’s 3rd biggest low-cost airline suffered a devastating blow on November 9 when the Norwegian government refused to give it more cash after granting the company guarantees of 3 billion kroner (277 million euros) earlier this year.

As a result, the airline decided to file for bankruptcy protection for two of its subsidiaries in Ireland: Norwegian Air International, which operates a large number of the company’s international flights, and Arctic Aviation Assets, which manages its fleet of aircraft.

“Seeking protection to reorganize under Irish law is a decision that we have taken to secure the future of Norwegian,” the head of the airline, Jacob Schram, said in a statement.

“Our aim is to find solutions with our stakeholders that will allow us to emerge as a financially stronger and secure airline,” he said.

A slew of other carriers have already collapsed because of the pandemic, which has virtually paralyzed air traffic worldwide. Among them are Chilean-Brazilian airline LATAM, Colombia’s Avianca, South African Airways and Comair, and Britain’s Flybe.

The airlines still flying have survived so far by slashing tens of thousands of jobs.

After a 66% drop in global air traffic predicted this year, airlines’ revenues are expected to still be down by 46% in 2021 from 2019, the International Air Transport Association said in October, when it appealed for more aid for the industry.

Norwegian said earlier this month it needed fresh cash to see it through the winter, but the government refused, arguing it was too risky and potentially anticompetitive.

Just a day later, on November 10, Norwegian said it had only 318 million euros in its coffers, after going through more than 47 million euros per month in the 3rd quarter.

Norwegian, which employed 10,000 people and had 140 aircraft in service at the start of the year, now has just 600 employees still at work and 6 aircraft still flying.

On Wednesday, it said it would continue its operations as it pursued negotiations on its financial situation.

“The [restructuring] process is expected to take up to 5 months,” Schram said at a press conference.

The recent news that several COVID-19 vaccines may be ready for distribution next year has cheered the airline industry, but investors of late have questioned Norwegian’s chances to survive.

Its shares have collapsed by nearly 99% since the start of the year.

The company has been struggling since long before the pandemic.

An ambitious expansion program saddled it with a mountain of debt, which amounted to 48.5 billion kroner at the end of September, more than 28 times its current market value.

In a major restructuring program earlier this year, Norwegian’s creditors, including leasing companies, had agreed to convert part of the company’s financial commitments into capital, thereby making them the carrier’s biggest shareholders.

A low-cost pioneer in the long haul segment that used more fuel-efficient aircraft, Norwegian first ran into a string of problems with the Rolls-Royce engines on its Boeing 777 Dreamliners.

It has also not been able to use its 18 Boeing 737 MAX aircraft for almost two years after they were grounded worldwide following two deadly crashes.