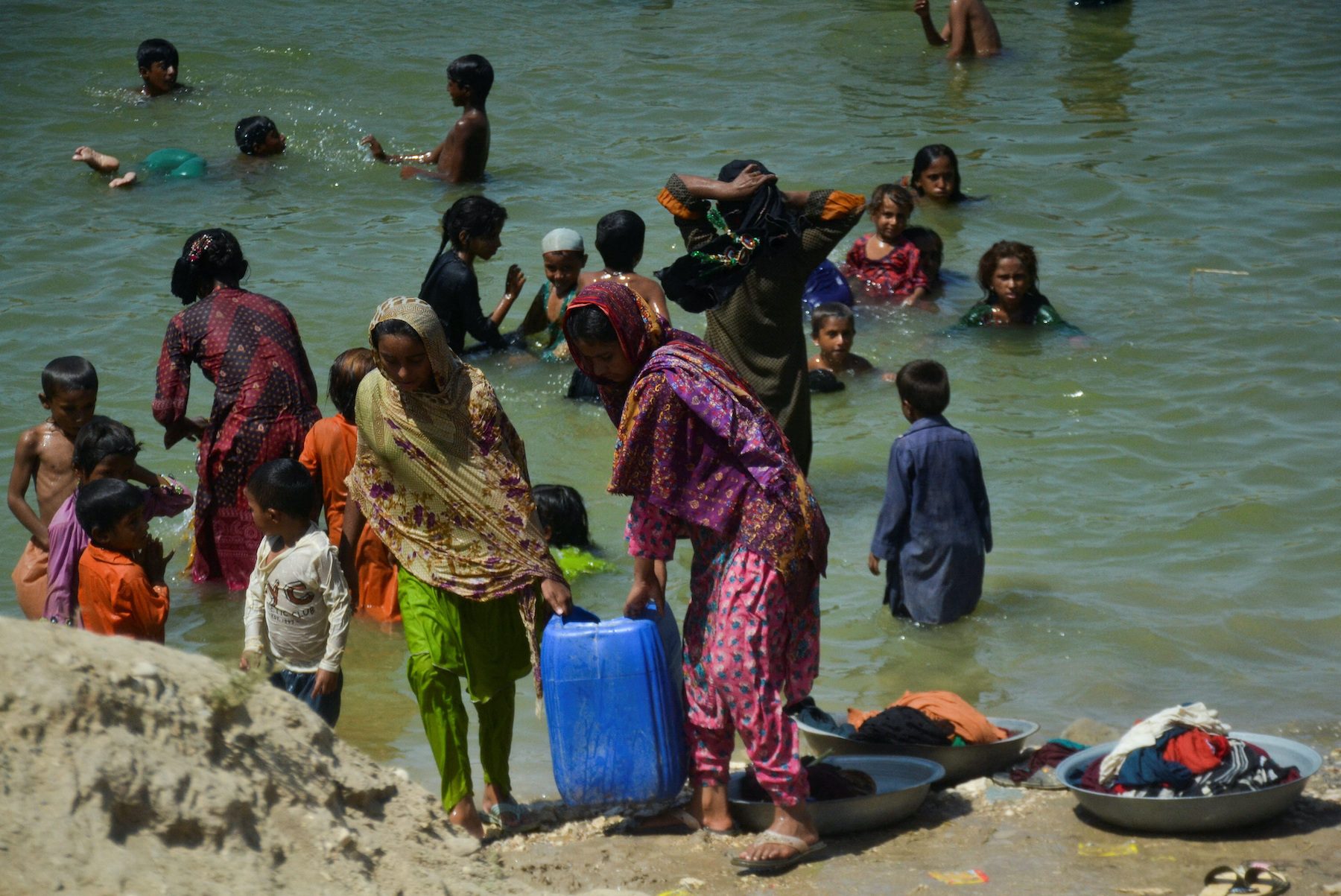 EVACUEES. People, displaced because of floods, carry a canister filled with floodwater while taking refuge at a camp in Sehwan, Pakistan, September 20, 2022.

Pakistan‘s finance minister said on Friday, September 23, the South Asian nation was seeking debt relief from bilateral creditors in the wake of devastating flooding but emphasized the government would not seek any relief from commercial banks or Eurobond creditors.

Pakistan’s bonds had slumped to just half their face value throughout the day after the Financial Times said a United Nations development agency was urging the cash-strapped country to restructure its debt.

Devastating floods engulfed large swathes of Pakistan this month, killing more than 1,500 people and causing damage estimated at $30 billion, fanning fears that Pakistan would not meet its debts.

“Given the climate-induced disaster in Pakistan, we are seeking debt relief from bilateral Paris Club creditors,” Finance Minister Miftah Ismail said in a Tweet. “We are neither seeking, nor do we need, any relief from commercial banks or Eurobond creditors.”

A memorandum the United Nations Development Programme (UNDP) is set to hand Pakistan’s government this week says its creditors should consider debt relief in the wake of the floods, according to the Financial Times.

The memorandum further proposed debt restructuring or swaps, in which creditors would forego some repayments in exchange for Pakistan’s agreement to invest in climate change-resilient infrastructure, the paper said.

Neither the foreign office in Islamabad or a UNDP spokesperson in Pakistan immediately responded to Reuters’ request for comment on the memorandum. The country’s finance and information ministers could also not be reached.

The bond market reaction on Friday strengthened fears of another default by Pakistan, hammering its international market government debt.

One of the main sovereign bonds due for repayment in 2024 slumped more than 10 cents to about 50 cents on the dollar, while another due in 2027 fell to about 45 cents.

Miftah Ismail had told a Reuters interview earlier this week that there was no chance of a credit default risk.

The government needs to pay $1 billion on bonds maturing in December. It has interest payments worth around $0.6 billion for the 2022-2023 fiscal year but the next full bond redemption is not until April 2024.

Miftah said in Friday’s Tweet that the $1-billion bond would be paid on time and in full.

Prime Minister Shehbaz Sharif also appealed on Friday to rich nations for immediate debt relief, saying what had been done was commendable, but adding, “It’s far from meeting our needs.”

Sharif, who along with Ismail is in New York to attend the UN General Assembly, told Bloomberg TV that Pakistan had taken up the debt relief issue with UN Secretary General Antonio Guterres and world leaders.

“We have spoken to European leaders and other leaders to help us in Paris Club, to get us a moratorium,” he said, referring to rich nation creditors.

Sharif and finance minister Ismail said they had also taken up the relief issue with the International Monetary Fund (IMF) and the World Bank.

Ismail said the IMF has “almost agreed” to the request for easing the conditions of Pakistan’s $7-billion program that was resumed in July after being delayed for months.

The IMF’s representative in Islamabad didn’t respond to a request for comment.

The country of 220 million would not be able to stand on its feet, Sharif added, “unless we get substantial relief.”

He said Pakistan would also seek relief from longtime ally China, to which it owes about 30% of its external debt.

Both Pakistan’s government and Guterres have blamed the flooding on climate change. – Rappler.com