In a press conference on Wednesday, November 28, National Statistical Coordination Board Secretary-General Jose Ramon Albert said the better-than-expected growth was driven mainly by the services sector, supported by "the 5 consecutive quarters of sustained accelerated growth of the industry and the seemingly weather tolerant agriculture sector."

The third-quarter growth -- the highest seen under the Aquino administration -- was the fastest in Southeast Asia, and the second-fastest in Asia, next to China's 7.7%. 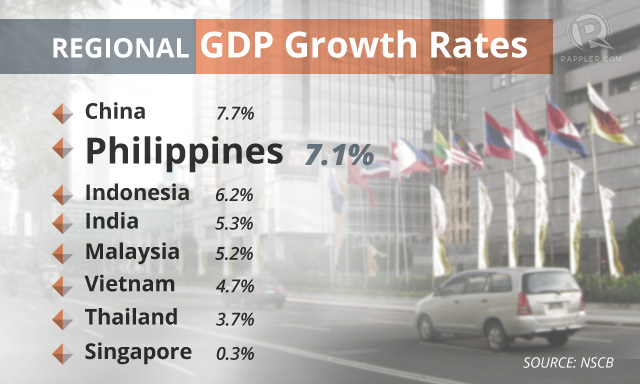 It was also way higher than the 5.4% forecast in a poll of international and local economists, the 6% revised growth recorded in the second quarter of the year, and the 3.2% growth in the third quarter of 2011.

The third-quarter 2012 figure brought the 9-month average Philippine growth to 6.5%, above the government's official target range of 5% to 6%.

“Obviously we have already exceeded 5-6%, and obviously the full-year target would now be at the range of 6-7%,” Socioeconomic Planning Secretary Arsenio Balisacan said.

“As to the 7% growth in 2012, it is our hope [we can hit it]. The last quarter of the year is usually quite strong because of holiday spending.”

Comprising half of the gross domestic product (GDP) growth, the services sector expanded 7% in the third quarter.

This was accounted for by “the robust performances of transport, storage and communication, financial intermediation and real estate.” The booming business process outsourcing (BPO) industry and strong overseas Filipino worker (OFW) remittances have fueled commercial and residential property take-up in the country.

Industry grew 8.1% as growth in manufacturing and construction offset the decline in mining and quarrying activities.

Meanwhile, agriculture expanded 4.1% on higher palay and corn production despite the series of storms and incessant rain that hit the country in July to September. The country is jacking up production to attain self-sufficiency in the staples.

On the demand side, increased household and government spending as well as higher investments in construction propelled growth, according to Albert.

Household spending, which accounted for about three-fourths of GDP growth, rose 6.1%. Household consumption was fueled by higher OFW remittances during the period.

Government spending went up 12%, while public and private construction expanded 24.8%.

“This is the ultimate public-private sector partnership. Government takes care of fiscal sustainability, macroeconomic stability and continued business facilitation, while the private sector responds with more investment and consumption,” he said in a post on his Twitter account.

Purisima said the economic performance was significant because “it is much higher than the trend growth of 4.7% the past 10 years” and was achieved in a “very difficult” global economic environment.

For Budget Secretary Florencio “Butch” Abad, the third-quarter growth could be largely attributed to Aquino's fiscal strategy and the private sector's “heightened confidence” in it.

“We are creating an environment that’s ripe for both local and foreign investments and stable enough to keep our fiscal performance at a reasonable high,” he said.

Next to ensuring high growth, the Aquino administration said it aims for a trickle-down effect on sectors, especially the poorest of the poor.

“Equitable and inclusive growth is a commitment of the Aquino administration that has prioritized the establishment of both social and physical infrastructure, which continues to redound to a more robust economy for the benefit of all Filipinos,” Presidential spokesman Edwin Lacierda said in a statement.

Balisacan however admitted that the country still has a long way to go before it could see inclusive growth.

Balisacan said sustained growth will translate to higher jobs for Filipinos, but the more important issue that needs to be addressed is the quality of these jobs. He said creating decent jobs is the biggest challenge of the Philippine economy.

He also earlier pointed out that growth must be sustained at the present rate over the next 15 years for Filipinos' incomes to double.