MAP: The poorest provinces in PH

MANILA, Philippines - Despite the government's efforts to improve the lives of Filipinos in the countryside, in the first 6 months of 2012 there were 15 provinces & 1 city that have over 40% of their population living below the poverty threshold.

The 1st Semester 2012 Poverty Statistics released by the National Statistical Coordination Board (NSCB) on Tuesday, April 23, showed that most of the poorest provinces are located in Mindanao while the least poor were located mainly in Luzon.

Below is a map showing the poverty incidence -- a percentage of the region's population -- nationwide. 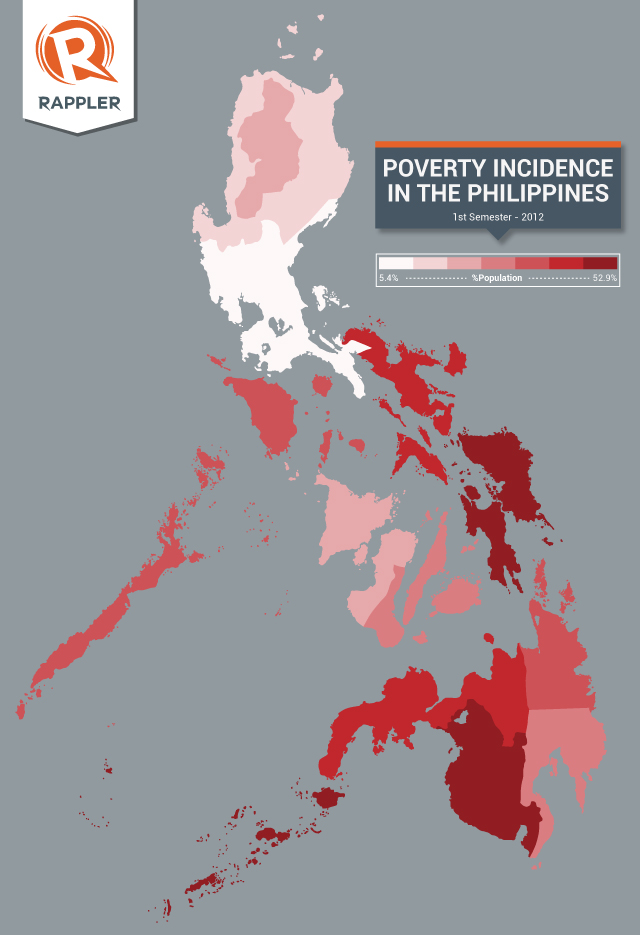 The 15 poorest provinces in the country in the first 6 months of 2012 were:

Cotabato City, which is a chartered city (hence is not tracked in the figures for Maguindanao province), figured among the poorest areas at 41.5%.

In contrast, the least poor provinces in the first semester were:

The government considers a Filipino family poor if monthly earnings are less than the poverty threshold. In the 1st semester of 2012, poverty threshold for a family of 5 was at P5,458 per month to meet basic food needs. (READ: How much does a family need to stay out of poverty?)

If non-food needs -- such as clothing, housing, transportation, health, and education expenses, and others -- are added to the threshold, cut off in 2012 went up to P7,821 earnings a month.

Natural disasters like typhoons kept many poor Filipinos below the poverty line. NSCB's Albert said disasters were "a threat to development."

The NSCB said the implementation of the Conditional Cash Transfer (CCT) program, the flagship anti-poverty effort of the Aquino government, was not able to significantly improve the income inequality in the country in the first semester 2012.

One of the reasons cited for this is that the CCT budget allocated for the period accounted for only 25% of the amount needed to eradicate poverty.

The NSCB estimates the total cost of poverty eradication, exclusive of targeting costs, is P79.7 billion for the first semester of 2012.

The income divide between the have's and have-not's remain wide, the data showed.

The NSCB explained that income gap measures the amount of income required by the poor in order to get out of poverty, in relation to the poverty threshold itself.

This may be used as a hypothetical benchmark for the amount needed to eradicate poverty as a whole, assuming expenses are focused solely on assistance rather than on targeting costs such as operations and implementation. - Rappler.com