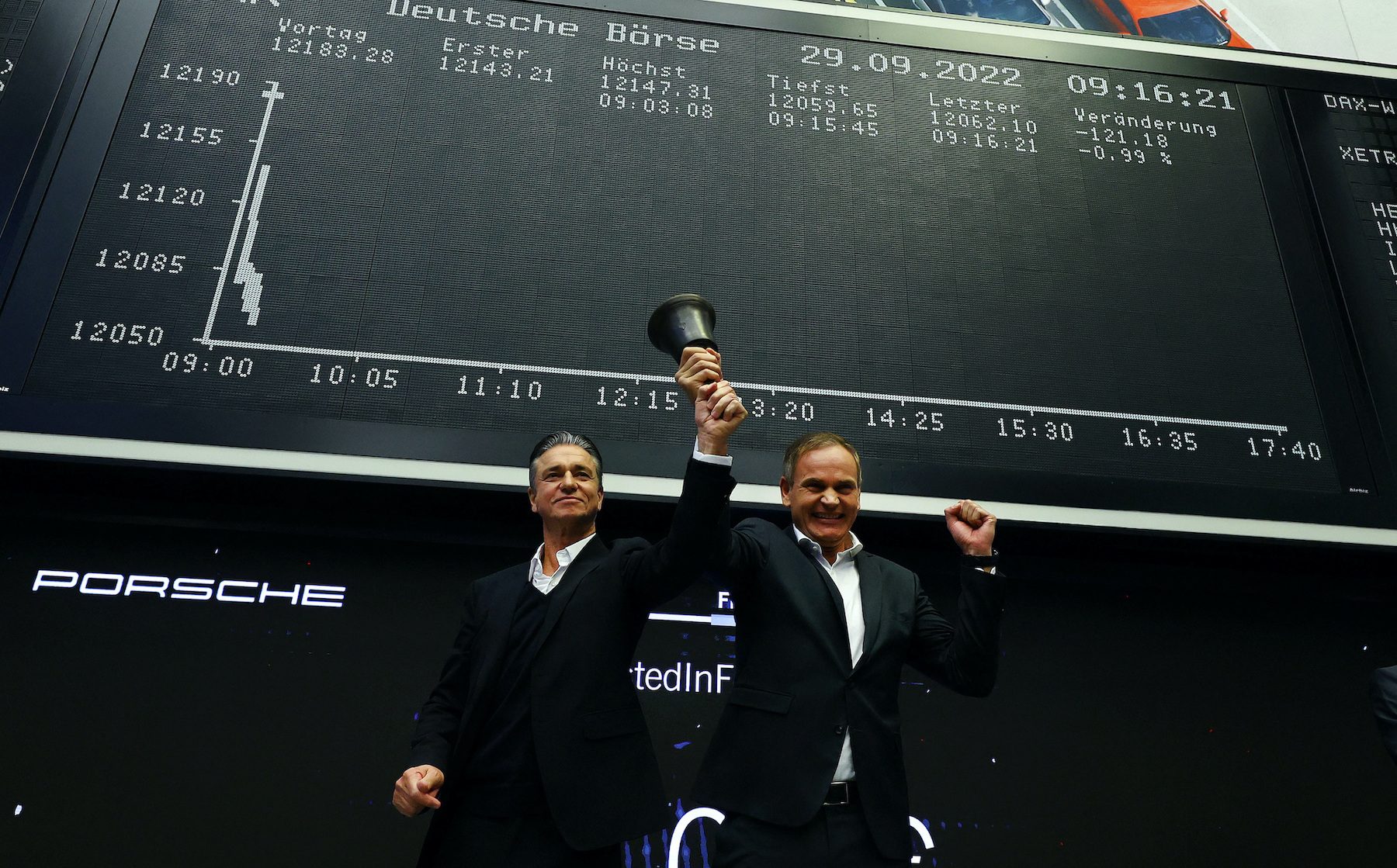 Volkswagen priced Porsche AG shares at the top end of the indicated range, and raised 19.5 billion euros via the listing to fund the group’s electrification drive.

Some 25% plus one ordinary share went to the Porsche and Piech families via Porsche SE, Volkswagen’s largest shareholder which now has a blocking minority on the sports car brand.

The share performance puts Porsche AG’s valuation at about 75.43 billion euros, only slightly below former parent Volkswagen, which is worth around 80.1 billion euros, and ahead of rivals such as Ferrari. It is Germany’s biggest listing since Deutsche Telekom in 1996.

Shares in Porsche SE were down by 10.9% as investors switched across. Volkswagen’s shares were down 6.9% from Thursday’s open to 128.5 euros.

Traders said some investors who bought Volkswagen and Porsche SE as an initial public offering (IPO) play could be unwinding their positions and switching into Porsche AG, undermining Volkswagen’s aim of bumping up its capitalization by showcasing the value of just one of its brands.

“Porsche was and is the pearl in the Volkswagen Group,” said Chris-Oliver Schickentanz, chief investment officer at fund manager Capitell. “The IPO has now made it very, very transparent what value the market brings to Porsche.”

Of the 19.5 billion euros raised from the IPO, around 9.6 billion will go to Volkswagen – just under a fifth of the 52-billion-euro budget needed for electrification plans – with the rest distributed among shareholders as a special dividend.

“We are well set-up financially, have strong cash flows to fund our electromobility strategy ourselves,” the CFO said.

‘Not a dream environment’

“This is not exactly a dream environment for an IPO today,” said QC Partners wealth manager Thomas Altmann.

Volkswagen has said the market’s volatility was precisely why fund managers were sorely in need of a stable and profitable business like Porsche AG in which to invest.

A banker involved in the transaction described the Porsche listing as a one-off, predicting the market would freeze over again very soon.

The listing broke records, reaping the highest amount since Deutsche Telekom in 1996.

But Porsche is trading at a multiple of around 7.2 times its earnings – far below Ferrari’s multiple of 40.

Companies in the region have raised $44 billion from equity capital markets deals up to Tuesday, September 27, Refinitiv data shows, with only $4.5 billion from IPOs.

“There’s a lot to like about the company, with its aggressive electrification plans, expected strong cashflow generation, and premium brand positioning in the market,” Chi Chan, portfolio manager, European equities, at Federated Hermes Limited, told Reuters.

“However, it is coming to market at a time of unprecedented turmoil and consumer confidence is falling.”

Porsche AG chief executive Oliver Blume, whose dual role as the new head of Volkswagen has drawn criticism from some investors, hailed the listing as an “historic moment” and dismissed the idea that he would at some point give up one of the two positions.

Bank of America, Citigroup, Goldman Sachs, and JPMorgan worked as joint global coordinators and joint bookrunners on the deal, while Mediobanca acted as financial adviser to Porsche. – Rappler.com