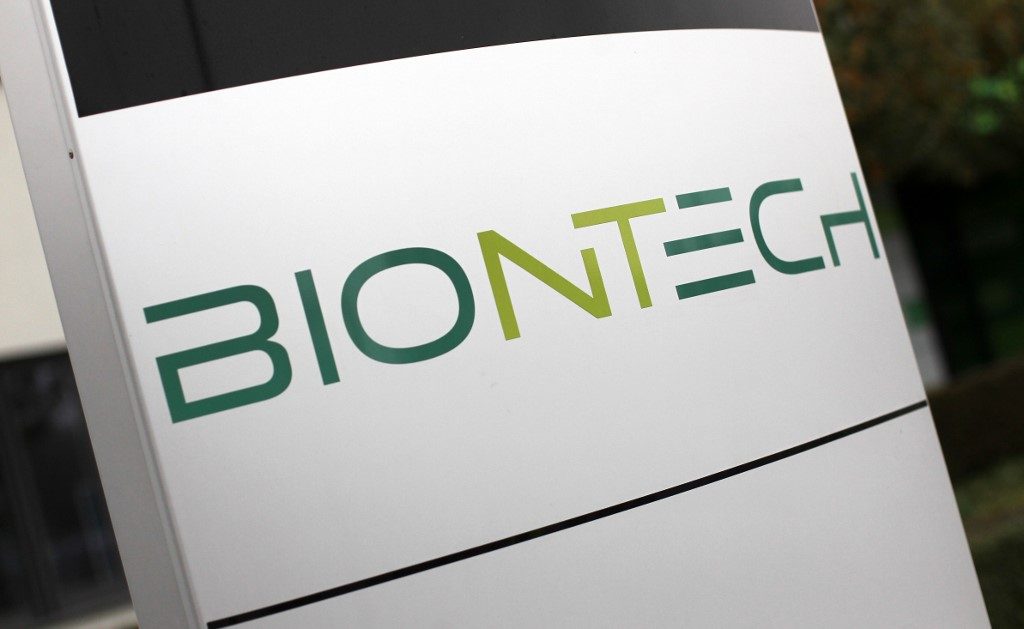 BIONTECH. The BioNTech logo is pictured at its headquarters in Mainz, Germany, on November 12, 2020.

The small German biotech firm BioNTech, started by a husband and wife team with Turkish roots, had never brought a vaccine to market before.

But its experimental technology has now become the first authorized for use in the Western world to help end the coronavirus pandemic.

Along with its United States partner Pfizer, BioNTech on Wednesday, December 2, said its COVID-19 vaccine has been granted approval by Britain, with a rollout planned for as early as next week.

Mainz-based BioNTech was co-founded in 2008 by Ugur Sahin and his wife Ozlem Tureci, both scientists and the children of Turkish immigrants to Germany, as well as Austrian cancer expert Christoph Huber.

In normal times, BioNTech and its roughly 1,500 employees are focused on developing specialized immunotherapies for cancer patients based on “messenger RNA” (mRNA) molecules that trigger the building of proteins in cells, to stimulate the immune system.

It’s this same technology, which has the benefit that it can be developed more quickly than traditional vaccines, that lies at the heart of its COVID-19 shot.

The vaccine will introduce synthetic mRNA into the human body to trick the immune system into producing the viral proteins needed to provoke a safe but robust offensive against the coronavirus.

Early in the starting blocks

Sahin, 54, jumped into action in January shortly after reading about the emergence of a new and deadly coronavirus in the Chinese city of Wuhan.

By the time much of the planet was in lockdown in March, BioNTech had developed 20 vaccine candidates based on mRNA technology, he told Der Spiegel weekly.

Those were eventually whittled down to a handful of the most promising options, with vaccine BNT162b2 now the frontrunner.

Teaming up with Pfizer

Having struck a deal with US pharma giant Pfizer to work together to develop mRNA-based flu vaccines in 2018, teaming up on a potential coronavirus vaccine was an obvious next move for BioNTech.

The two companies announced in March that they aimed to jointly develop a COVID-19 jab, “pairing Pfizer’s development, regulatory, and commercial capabilities with BioNTech’s mRNA vaccine technology and expertise,” they said at the time.

While global headlines tend to lead with Pfizer’s involvement, Sahin insisted to Spiegel: “It is our technology.”

The cooperation is a good fit because it allows BioNTech “to develop and distribute a possible vaccine in the shortest time possible,” he added.

The BNT162b2 vaccine will require two jabs to be effective.

BioNTech and Pfizer have said they expect to supply up to 50 million vaccine doses globally in 2020, and up to 1.3 billion in 2021.

In a clear sign that they were gearing up for mass production, BioNTech in September bought a manufacturing site in Marburg in western Germany from Swiss pharma group Novartis, along with its 300 employees, allowing it to produce millions of additional doses each year.

BioNTech already has two other production sites in Germany, while at least 4 Pfizer sites in the United States and Europe will join in the unprecedented effort to roll out a vaccine at record speed.

Sahin had told Agence France-Presse in an interview in November that if all the players involved – governments, pharma companies, and vaccine logistics firms – “do a really good job,” then “we can succeed in vaccinating 60% to 70% of the population by the autumn of 2021.”

“And when we’ve accomplished that then we could have a normal winter. Without another shutdown.”

Besides Britain, the European Union and a slew of countries including the US and Japan have already placed orders for millions of doses of the BioNTech-Pfizer vaccine as nations eagerly await the regulatory nods.

BioNTech has also struck a deal with Shanghai-based Fosun Pharmaceutical Group, which will have the exclusive rights to bring the vaccine to China. – Rappler.com