UK economy grew more than thought at end of miserable 2020 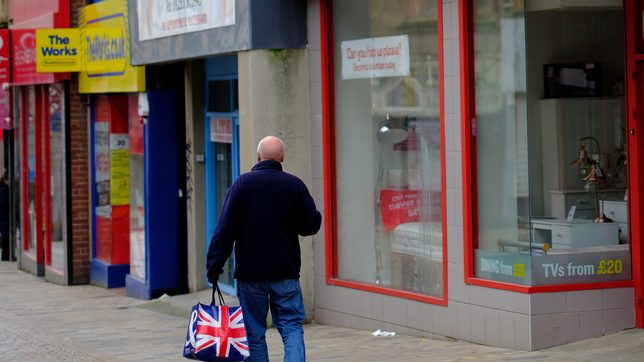 UK ECONOMY. A man carries a Union Jack-themed shopping bag as he walks along an empty shopping street in Blackpool, Britain, March 9, 2021.

Britain’s coronavirus-hammered economy grew more quickly than previously thought in the final 3 months of last year but still shrank by the most in more than 3 centuries in 2020 as a whole, official data showed on Wednesday, March 31.

The figures also revealed the biggest pile of household savings on record last year, which the Bank of England (BoE) thinks will fuel a recovery when consumers are freed from lockdown.

Gross domestic product (GDP) increased by 1.3% between October and December from the previous 3-month period, the Office for National Statistics (ONS) said.

Economists polled by Reuters had expected the growth rate to remain at the ONS’ preliminary 1% estimate.

Britain’s economy suffered the biggest drop of all countries in the Organisation for Economic Co-operation and Development except for Argentina and Spain last year, OECD data has shown.

It remained 7.3% smaller than before the pandemic, in inflation-adjusted terms, the 2nd biggest drop among 8 major economies listed by the ONS.

Although this partly reflects the way different countries produce the data, some of the weakness shown by Britain’s economy – particularly in household spending – was real.

After a roller-coaster 2020, when GDP careened 19.5% lower in the 2nd quarter, during the 1st lockdown, and grew by almost 17% in the 3rd, the BoE expects growth of 5% in 2021 as a whole, helped by Europe’s fastest vaccination program.

A survey published earlier on Wednesday showed employers were much more confident about hiring staff.

Key to the recovery prospects will be the extent to which households spend savings they racked up while stuck at home.

Samuel Tombs, an economist with Pantheon Macroeconomics, said the rise in savings might be offset by the hit to the value of shares held by investors.

“Households, therefore, likely will cling on to this cash, or top up their underperforming pensions, rather than spend it,” he said.

The figures also showed growth in business investment which rose by 5.9% in the 4th quarter from the previous 3 months. But household spending fell by 1.7% and government spending, up by almost 7%, was the key support for the economy.

Finance minister Rishi Sunak announced yet more stimulus earlier this month to see the economy through the end of the government’s restrictions, taking his total emergency response to more than 350 billion pounds.

Separate data showed Britain’s current account deficit widened to 26.3 billion pounds in the 4th quarter, almost double the shortfall in the previous 3 months, as firms rushed to import goods before the January 1 start to the country’s less open trade relationship with the European Union.

But the deficit – which leaves Britain reliant on foreign inflows of cash – came in below forecasts of 33 billion pounds in the Reuters poll.