Russia edges close to default on debt, puts roubles aside for bondholders ROUBLE. A Russian rouble banknote is seen in front of a descending stock graph in this illustration taken March 1, 2022.

Facebook Twitter Copy URL
Copied
(1st UPDATE) 'In theory, a default situation could be created but this would be a purely artificial situation,' says Kremlin spokesman Dmitry Peskov

LONDON, United Kingdom – Russia edged closer to a potential default on its international debt on Wednesday, April 6, as it set aside roubles to pay holders of international bonds that need to be repaid in dollars and said it would continue to do so as long as its foreign exchange reserves are blocked by sanctions.

The United States on Monday, April 4, stopped Russia from paying holders of its sovereign debt more than $600 million from reserves held at US banks, saying Moscow had to choose between draining its dollar reserves and default.

Russia has not defaulted on its external debt since reneging on payments due after the 1917 Bolshevik Revolution, but its bonds have emerged as a flashpoint in the diplomatic crisis and sanctions tit-for-tat between Moscow and western capitals.

“This speeds up the timeline around when Russia runs out of space on willingness and ability to pay,” one fund manager holding one of the bonds due for payment on Monday said.

The Kremlin said it would continue to pay its dues.

“Russia has all necessary resources to service its debts…. If this blockade continues and payments aimed for servicing debts are blocked, it (future payment) could be made in roubles,” Kremlin spokesman Dmitry Peskov said.

Moscow has managed to make a number of foreign exchange coupon payments on some of its international bonds with a face value of around $40 billion outstanding before the United States stopped such transactions.

While sanctions have frozen roughly half of $640 billion in Russia’s gold and foreign currency reserves, the country still receives billions of dollars from exporting crude and gas.

Russia’s finance ministry said on Wednesday it had to pay roubles to holders of its dollar-denominated Eurobonds maturing in 2022 and 2042 as a foreign bank had refused to process an order to pay $649 million to holders of its sovereign debt.

The finance ministry said the foreign bank, which it did not name, rejected Russia’s order to pay coupons on the two bonds and also did not process payment of a Eurobond maturing in 2022.

Russia’s ability to fulfill its debt obligations is in focus after sweeping sanctions in response to what Moscow calls “a special military operation” in Ukraine have frozen nearly half of its reserves and limited access to global payment systems.

The United States on Wednesday targeted Russian banks and elites with a new round of sanctions in response to what President Joe Biden condemned as “major war crimes” by Russian forces in Ukraine.

EXPLAINER: Can Russia make payments on its sovereign debt? 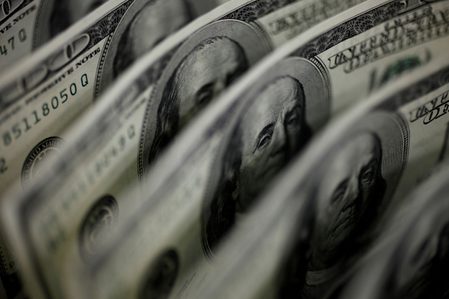 JPMorgan, which had been processing payments on Russian sovereign bonds as a correspondent bank, was stopped by the US Treasury from doing so for the two payments due on Monday, a source familiar with the situation said.

Russia may consider allowing foreign holders of its 2022 Eurobonds to convert rouble payments into foreign currencies once access to its forex accounts is restored, the finance ministry said.

Until then, a rouble equivalent of Eurobond payments aimed at bondholders from so-called unfriendly nations will be kept in special “C” type accounts at Russia’s National Settlement Depository, the ministry added.

Both bonds were issued in 2012 and stipulate payment in US dollars – unlike some bonds that were sold later and allow for payment in alternative currencies such as euro, pound sterling, Swiss franc, or even rouble.

Russia has a 30-day grace period to make the dollar payment, but if the cash does not show up in bondholders’ account within that time frame it would constitute a default, global rating agencies have said.

Moscow introduced stringent capital controls to shore up its currency in the wake of the war, which in combination with financial sanctions make it impossible for foreign investors to repatriate any payments.

One-year upfront credit default swaps – a way of insuring exposure to Russia’s sovereign debt – jumped to 69 points from 60 points, according to IHS Markit.

Russia’s longer-dated dollar bonds, where trading has all but ceased, were quoted well below 20 cents in the dollar, while euro-denominated issues were bid at 15 cents.

Russia dismissed this as being a default situation.

“In theory, a default situation could be created but this would be a purely artificial situation,” Peskov said. “There are no grounds for a real default.”

Bondholders had been tracking bond payments since sweeping sanctions and countermeasures from Moscow which have severed Russia from the global financial system.

A Russian default would have been unthinkable before the invasion with the country still holding an investment grade rating as recently as February from major ratings agencies.

Russia is already locked out of the international borrowing markets due to the West’s sanctions, but a default would mean it could not regain access until creditors are fully repaid and any legal cases stemming from the default are settled.

A default could also create a host of headaches if countries or companies that would normally trade with Russia have self-imposed rules prohibiting transactions with a defaulted entity.

Furthermore, Russian debt default insurance policies known as credit default swaps taken out by investors for this kind of situation could be triggered. JPMorgan estimates there are roughly $6 billion worth of outstanding CDS that would need to be paid out.

Russia on Wednesday paid coupons on four OFZ treasury rouble bonds. These were once popular for their high yields among foreign investors, who are now blocked from receiving payments as a result of sanctions and Russian retaliation. – Rappler.com