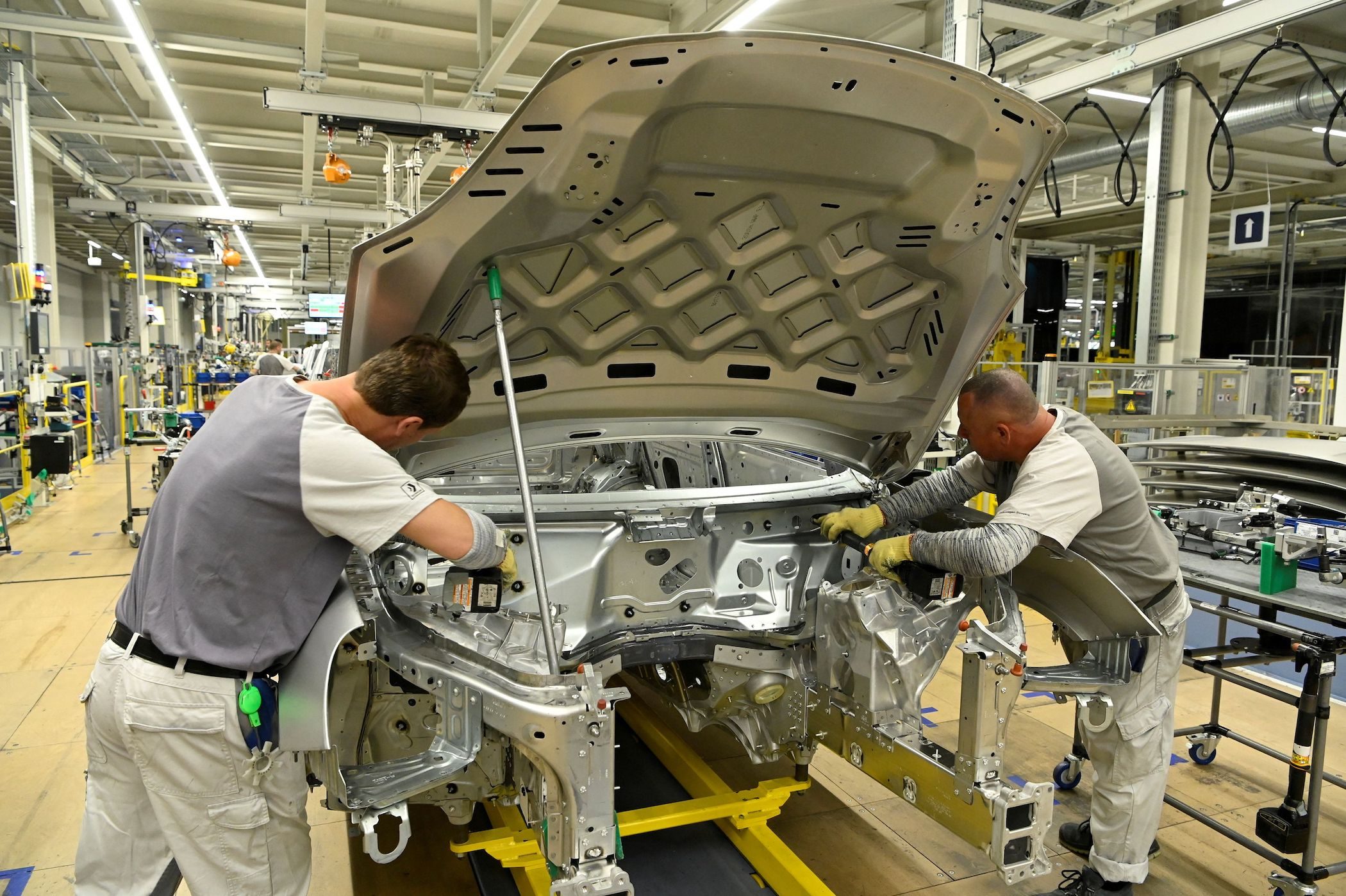 PORSCHE. Employees work on Porsche vehicles at a production line of the Volkswagen plant in Bratislava, Slovakia, July 4, 2019.

BERLIN, Germany – European companies are suffering yet more strain on supply chains already snarled up by the coronavirus pandemic as the conflict in Ukraine leads to growing shortages of key components, they warned on Wednesday, March 9.

The new snags pose a further threat to economic recovery in Europe, potentially prolonging existing bottlenecks that in some sectors were not expected to clear until next year.

The conflict has added to the trade chaos that followed the global economy’s emergence from pandemic lockdowns. Asia-Europe routes have been worst hit by issues including acute port congestion and cargo disruption due to the closure of Russian airspace, a JPMorgan analysis showed.

In the region’s largest economy, German carmakers Porsche, Volkswagen, and BMW and truckmaker MAN have all curtailed output due to a lack of supplies from the crisis region.

Russia’s invasion has forced the shuttering of Ukrainian suppliers of wire harnesses – a vital set of parts which bundle up to 5 kilometers (3.1 miles) of cables in the average car. Unique to each car model, vehicles cannot be built without them.

On Wednesday, German auto parts maker Continental said it too was working to shift production from a Russian plant where operations were suspended.

“In the event the geopolitical situation, in particular in Eastern Europe, remains tense or even worsens, it can result in lasting consequences for production, supply chains, and demand,” the group said.

Volkswagen’s luxury division Porsche has suspended production of its electric Taycan model at the group’s Stuttgart-Zuffenhausen plant until the end of next week, the company said, citing a lack of components. That meant about 200 Taycan cars a day cannot be built, it said.

French tire maker Michelin also said last week it would temporarily halt production at some of its plants in Europe due to logistical issues.

In the Czech Republic, which has built an industry around supporting western Europe’s car majors, over a fifth of auto sector companies are having to solve logistics problems caused by the conflict such as a lack of components, industry body AutoSAP said.

The conflict’s impact on shipping, rail, and air freight has been compounding problems in the European auto supply chain at a time when inventory levels were already low and carmakers were still reeling from a chip shortage and soaring energy prices.

As well as high-grade nickel, the price of metals used in car production, from aluminum in bodywork to palladium in catalytic converters, has also soared since the invasion.

With its complex supply chains, Europe’s car industry may be particularly exposed to disruption. But the impact is already being felt much more widely.

German ball bearings maker Schaeffler, which sources some of its steel from Russia, said this week it could not provide an outlook for the year due to the war in Ukraine.

Releasing its latest results, Sweden-based hardware store chain Clas Ohlson said it faced shortages in certain product categories and that the war could lead to further uncertainty in supply chains.

Nearly a third of 200 German companies surveyed by the IW think tank said they foresee problems with a lack of supplies – a figure which rose to nearly 40% for industrial companies.

“Germany’s growth outlook is deteriorating as the impact of the Russia-Ukraine conflict exacerbates existing supply chain disruptions and inflationary pressures,” rating agency Scope said as it cut its 2022 growth forecast for the German economy to 3.5% from 4.4%.

Both Germany’s Federal Association of Road Haulage, Logistics, and Disposal (BGL) group and Deutsche Post DHL warned that the conflict was creating local shortages of drivers, many of whom are Ukrainian and had returned home.

According to BGL, at least 7% of truck drivers in Germany are from Ukraine. Association chief Dirk Engelhardt said many of them are likely to have gone home to join the fight against Russia.

Deutsche Post DHL chief executive Frank Appel said it was not clear yet how many were returning to Ukraine. “We worry about whether those that go will return healthy,” he said. – Rappler.com