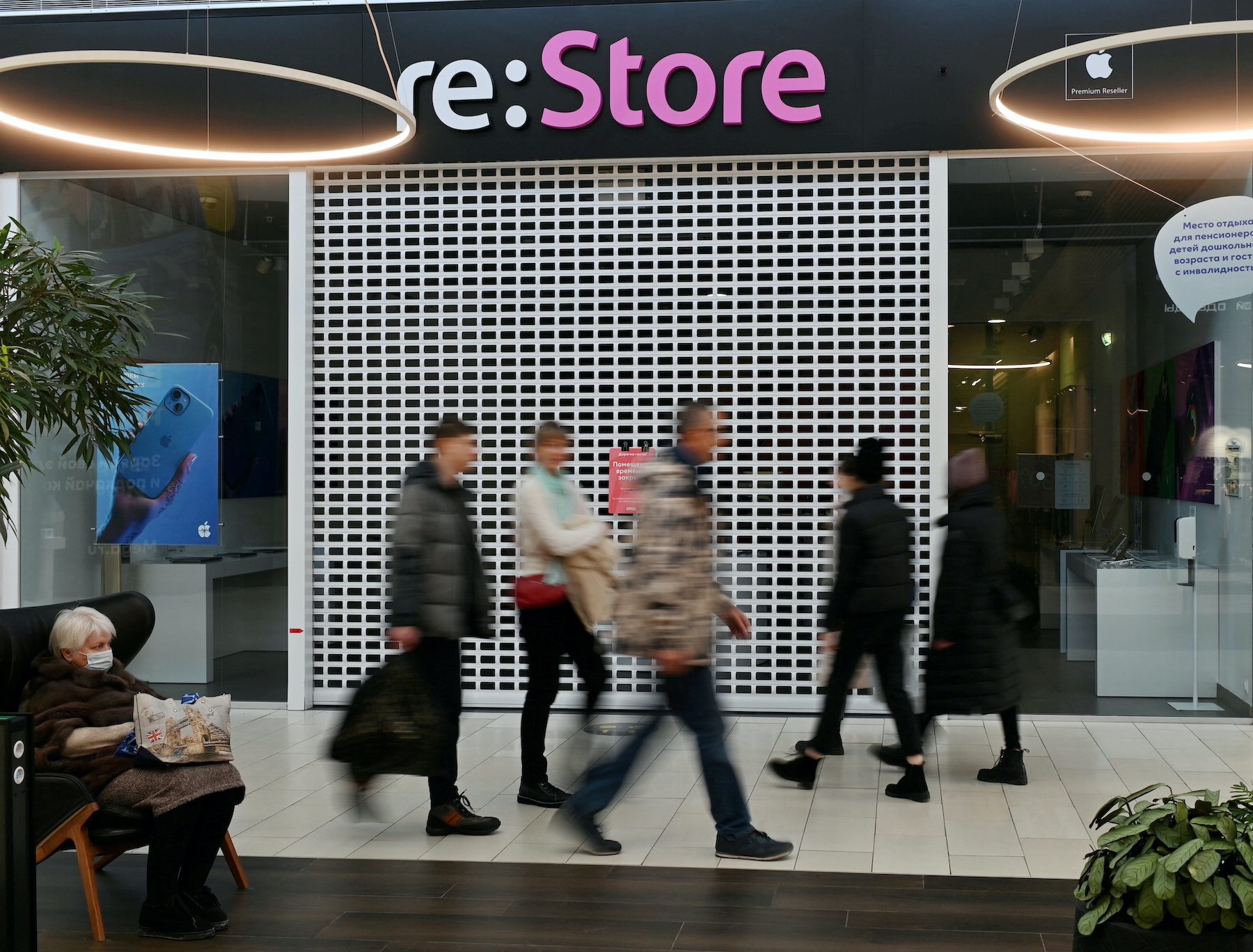 CLOSED. People walk past a closed Apple reseller shop at a mall in Omsk, Russia, March 2, 2022.

Facebook Twitter Copy URL
Copied
The ranks of Russia's jobless could swell by as much as 2 million by year-end, according to the Centre for Strategic Research in Moscow

LONDON, United Kingdom – The phone call telling Oleksandr Kyryliuk he was losing his job came just hours after Russian troops stormed into Ukraine. His employer, beermaker Samuel Smith, had decided to pull out of the Russian market.

“On February 24, we all woke up to a new reality,” said 33-year-old Kyryliuk, who had worked for the British company since 2018, growing sales of its bottled beers across Russia, Ukraine, and neighboring countries.

Ironically, Kyryliuk is Ukrainian, one of millions of people from across the ex-Soviet Union who moved to Moscow to seek work but are now caught up in the aftermath of Vladimir Putin’s invasion.

Sanctions imposed by Western nations to punish Russia for what it calls a “special operation” in Ukraine have sent the economy into a tailspin, with inflation and economic contraction both expected in the double digits.

And the ranks of Russia’s jobless, which Kyryliuk has now joined, could swell by as much as 2 million by year-end, according to the Centre for Strategic Research in Moscow. In the worst-case scenario, unemployment could approach 8%, the think tank estimates, almost double February levels.

“Russia has been forcefully yanked out of the global financial system. So the entire structure of the economy is going to change,” said Tatiana Orlova at Oxford Economics.

“We are going to see an uptick in white collar unemployment as foreign companies and banks are leaving, but companies are also withdrawing from sectors such as retail that employed cheap labor.”

Over 600 companies have announced their withdrawal from Russia since the invasion hit, according to the Yale School of Management, though many will pay employees for a few months.

With McDonald’s having employed more than 60,000 staff, French carmaker Renault 45,000, and retailer IKEA with 15,000, Orlova calculates that Western firms’ departure will directly cause the loss of approximately 1 million jobs.

Western embargoes on Russian exports, if implemented, may force mining and oil firms to lay off staff, Orlova said.

The number of people looking for jobs rose by nearly a tenth in the week to April 10 compared with the week before February 24, online recruitment platform HeadHunter said. The number of job openings fell by more than a quarter.

Samuel Smith, Kyryliuk’s former employer, confirmed via email it had ceased exporting to Russia after the invasion, adding, “We have no intention of supplying any of our bottled beers to Russia under the current regime.”

The impact is rippling out. With Western sanctions crimping travel, Moscow’s Sheremetyevo airport last month furloughed a fifth of its staff.

Russia’s services sector shrank in March at the fastest rate in almost two years, and employment fell at the sharpest pace since June 2020.

Alevtina, a 25-year beautician from the Moscow region, said more than 10% of her regular clients did not book treatments in March. That shaved 15,000 roubles ($185) off her average monthly earnings of 100,000 roubles.

“I think my customer base will be shrinking each month – clients complain about losing their jobs, so they are saving on beauty,” said Alevtina, who did not want to give her full name.

A massive, energy-fueled balance of payments surplus – estimated by a Reuters poll to nearly double this year to $233 billion – may allow authorities to maintain unemployment benefits.

But Orlova of Oxford Economics predicts a worse economic recession than in 1998 or 2008, and with longer-lasting consequences, for instance if sanctions prevent Russian firms accessing foreign technology and equipment needed for investment.

Her models also project Russia’s productivity, relative to that of its trading partners, will fall.

That partly stems from the hit to the promising information technology (IT) sector, which according to the Higher School of Economics, comprised 1.2% of Russian gross domestic product by end-2019 and had doubled in value over the previous six years.

But since the invasion, over 100,000 IT specialists have fled the country, the Russian Association of Electronic Communications estimates.

There are some Russia-specific factors that possibly capped unemployment below 6.5% during the COVID-19 crisis, while Western economies suffered double-digit rises.

For one, state-run companies often choose to cut wages and keep staff on the books.

Also, Russia’s demographics – its share of people aged over 65 is almost double the global 9% average, according to the World Bank – means jobs, especially unskilled ones, were increasingly filled by workers from neighboring countries.

So as jobs vanish, Russia’s crisis is starting to penetrate the far reaches of the former Soviet Union.

“There are job cuts in every sector, the rouble has fallen, and some people have not been paid,” Kubanychbek Osmanaliev, the head of the Kyrgyzstan Diaspora Council in Moscow, said.

“Our people are wondering what to do. Go home or wait for things to improve? Everyone knows there is no work at home either.” – Rappler.com