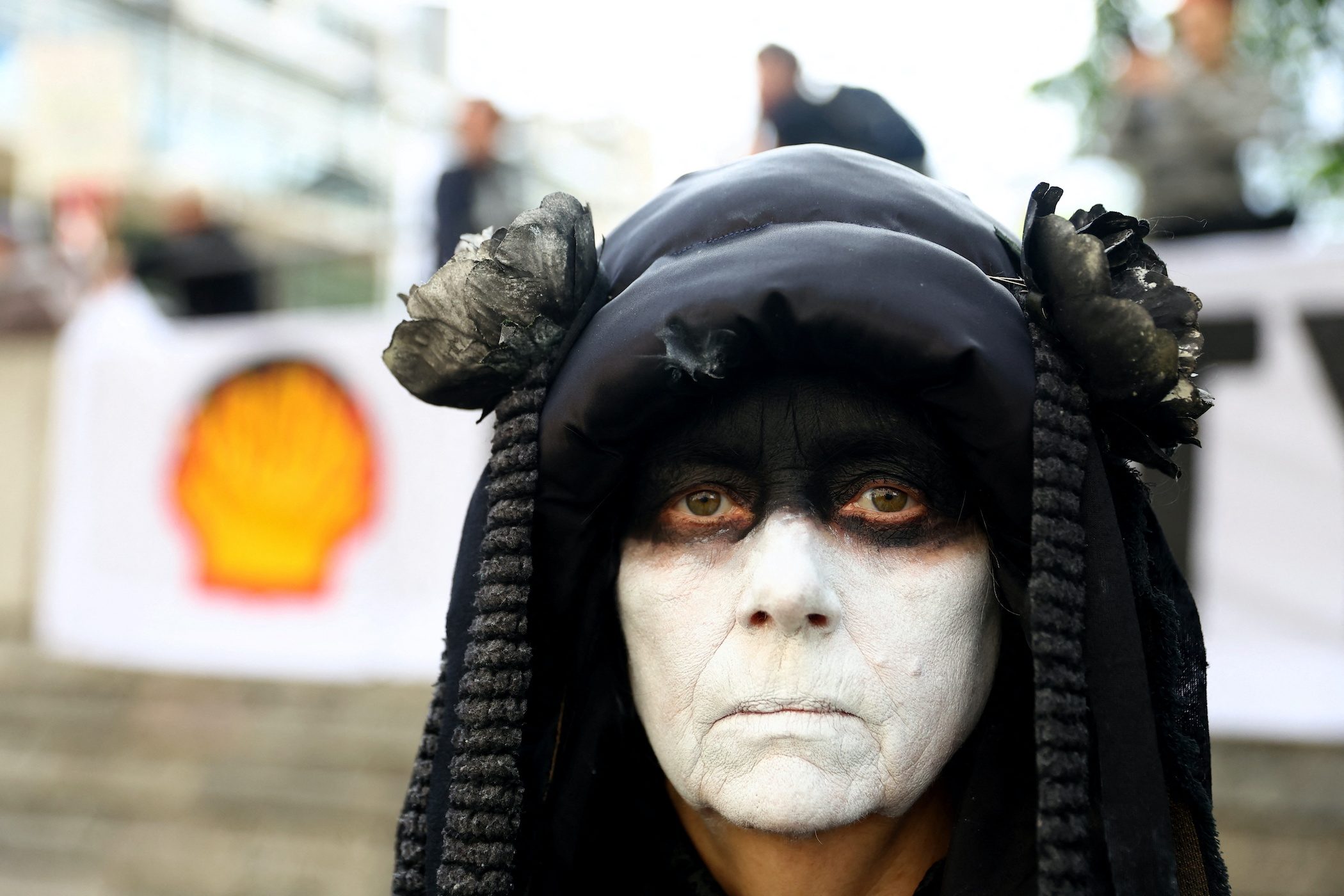 PROTEST. A climate activist attends a protest outside the Shell headquarters during the companyu2019s first investor meeting since moving to the UK, in London, Britain, May 24, 2022.

Facebook Twitter Copy URL
Copied
Shell aims to cut to net zero by 2050 all greenhouse gas emissions, including those from burning fuel and from products it sells

LONDON, United Kingdom – Shareholders backed Shell’s climate strategy in a meeting on Tuesday, May 24, that was disrupted by dozens of climate protesters, while a climate activist proposal from the Follow This group received fewer votes than last year.

It followed a Dutch court ruling in May 2021, telling the company to reduce greenhouse gas emissions in absolute terms by 45% by 2030 across the entire lifecycle of its hydrocarbons.

Shell aims to cut to net zero by 2050 all greenhouse gas emissions, including those from burning fuel and from products it sells. But it has appealed the ruling, saying it cannot be held responsible for customers releasing emissions by using Shell products.

Shell says its targets already support the Paris climate accord which scientists say requires global emissions to fall by about 40% by 2030. Shell’s climate resolution received 80% of votes, down from 89% last year, while Follow This received 20%, down from 30% last year, according to final results.

Critics such as Follow This say its spending does not reflect its targets and say Shell’s plans to cut emissions from oil well to car exhaust by 20% by 2030 and 45% by 2035 fall short.

“Investors have given in to Shell’s narrative that the crisis created by the war in Ukraine overrides the climate crisis,” Follow This founder Mark van Baal said.

“Both crises must be dealt with simultaneously by shifting investments to renewables.”

One area of contention is how emissions goals are measured. The bulk of Shell’s targets are measured in terms of intensity, not in absolute terms. Shell’s total emissions could rise as oil and gas production increases but the intensity could be reduced by, for example, increasing the company’s renewables generation.

Shell’s spending plans remain heavily tilted towards oil and gas. It plans to increase the share of spending on low-carbon energy to about 25% by 2025 from about 15% now.

As with Shell, shareholders in BP backed their company’s climate strategy, while fewer investors than last year supported the Follow This resolution.

Demonstrators gathered at the Shell venue in London in protest at the company’s climate policy, while Shell chairman Andrew Mackenzie and chief executive Ben van Beurden looked on.

“We’re here to embarrass them and hold them to account,” said Aidan Knox, before the protesters ended their protest which delayed the meeting’s proceedings by about three hours. – Rappler.com