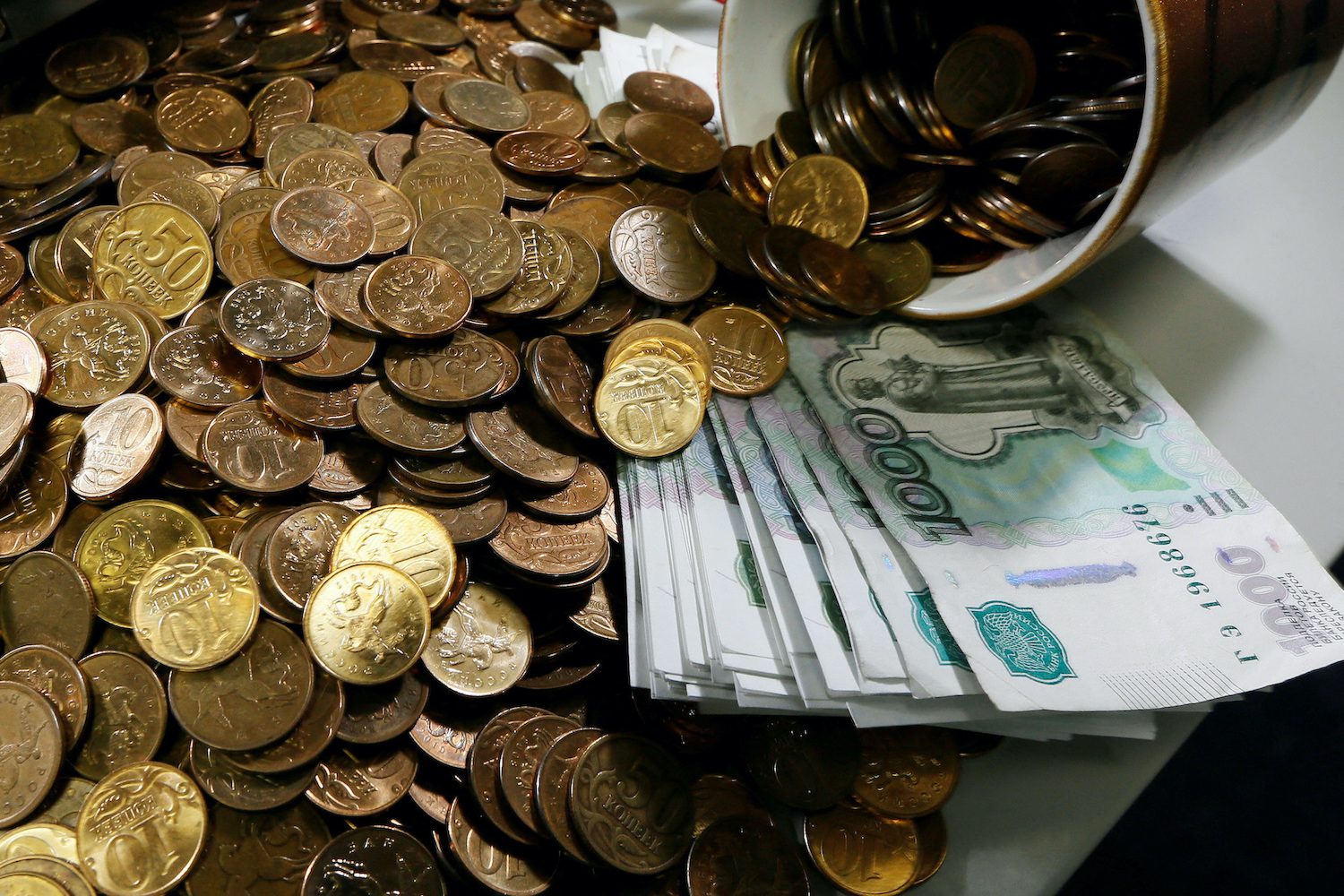 ROUBLE. Russian rouble banknotes and kopeck coins are seen on a table at a private company's office in Krasnoyarsk, Siberia, November 6, 2014.

Facebook Twitter Copy URL
Copied
Russia's 2022 'default,' announced by the United States but rejected by the Kremlin, is very different from debt crises of previous years

LONDON, United Kingdom – Russia may have defaulted for the first time on foreign bonds since the Bolsheviks refused to pay on a vast debt pile after the 1917 Revolution, but its $1.8-trillion economy is showing no sign of sinking just yet.

The sanctions imposed by the West over Russia’s invasion of Ukraine delivered the biggest external shock to Russia’s economy since the 1991 fall of the Soviet Union, but the economy has – so far – been remarkably resilient.

Russia’s 2022 “default,” announced by the United States on Monday, June 27, but rejected by the Kremlin, is very different from debt crises of previous years: in 1918 the Bolsheviks didn’t want to pay and in 1998 Russia could not pay its domestic debts.

This time, Moscow can pay and says it is ready to but the West is preventing it.

Following are five signs that the Russian economy is still resilient:

The strongest currency in the world

The rouble, which for decades even Russians shunned because it was so weak and volatile, is by far the world’s top performing currency against the US dollar year-to-date.

The rouble has been driven higher by proceeds from commodity exports, a drop in imports, and capital controls which have shielded the currency from a broader sell-off.

The rouble hit a seven-year high against the dollar and euro on June 22.

Russia ran a current account surplus of $110.3 billion in the first five months of 2022, up from $32.1 billion in the same period last year, central bank data showed.

The lifeblood of Russia’s economy has been trading above $100 a barrel since Russia invaded Ukraine. Brent crude oil was trading at $112.99 on Monday.

With high oil prices, Russia, the world’s second largest oil exporter after Saudi Arabia and the world’s largest exporter of natural gas, has a trillion-dollar-a-year cushion against sanctions.

For sure, Russia’s Urals blend of crude sells at a discount to Brent but is still high.

Western sanctions have forced Russia to sell its oil at large discounts up to $40 a barrel to China and India. But US officials have said Moscow was still earning more money from its energy exports today than before the war.

Russia’s central bank cut its key interest rates to the pre-crisis level of 9.5% on June 10 – and has kept the door open to a further easing as inflation slowed.

Just after the invasion, Russia hiked rates to 20%.

But that is still far below the astronomical rates of 150% imposed just before the August 1998 devaluation.

Food and no panic

There is still food in the shops of Moscow and few signs of panic.

Immediately after the invasion, there was some panic buying of things like sugar. But that has subsided: there is ample food in the shops of Moscow and no run on the banks.

Back in 1990, to alleviate Russian food shortages, the United States started supplying chicken legs to Russia that became known as “nozhki Busha” – or Bush legs – after President George H. W. Bush who signed the deal with Mikhail Gorbachev.

Some fear unemployment could be understated as big companies have yet to cut staff but for now at least, just 3 million are without a job. A new reading for May is due shortly. – Rappler.com