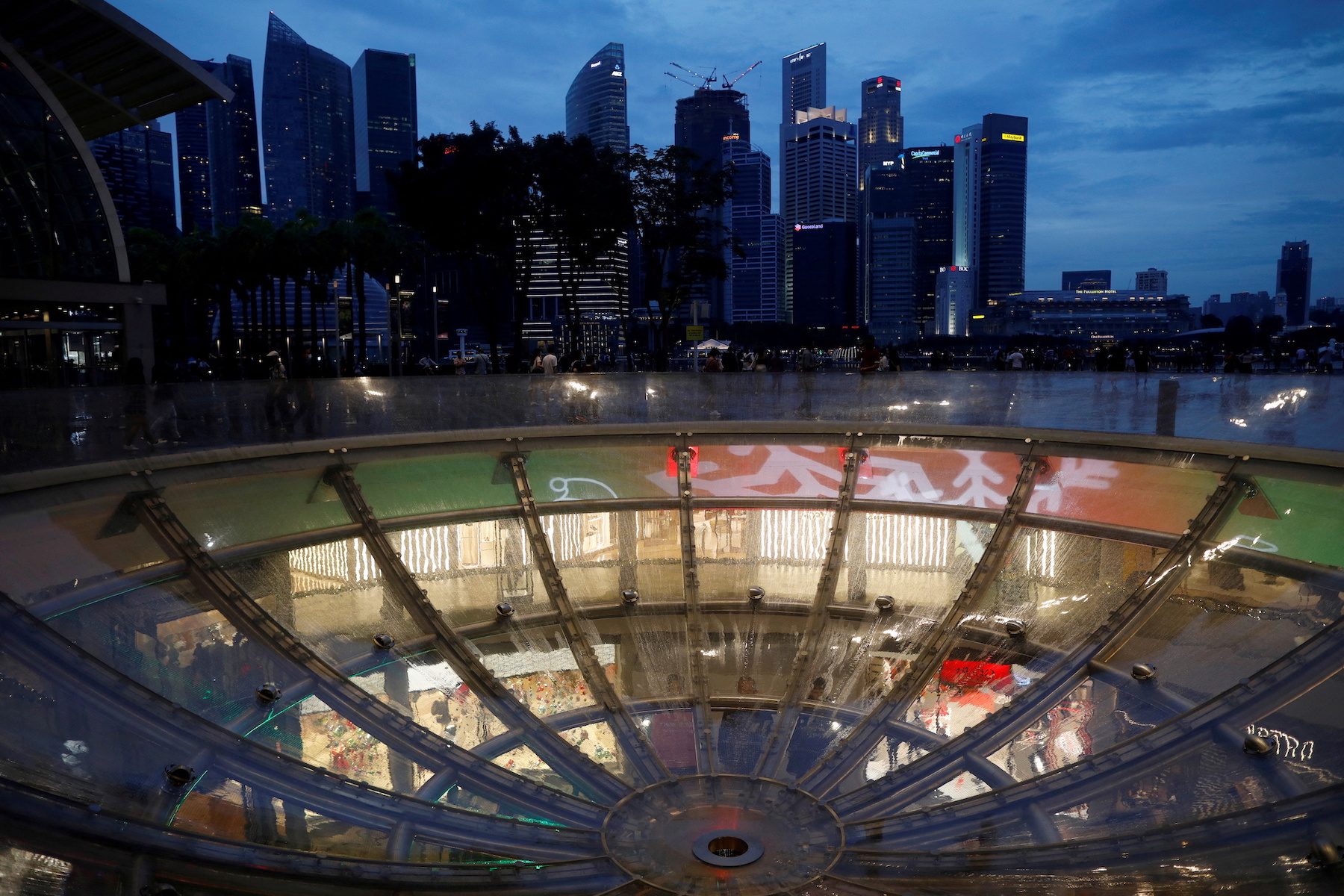 The city-state’s trade-dependent economy is highly susceptible to swings in global inflation and the central bank’s sudden move comes as price pressures ring alarm bells for policymakers elsewhere in Asia.

Selena Ling, head of treasury research and strategy at OCBC, said she expects the central bank to tighten again in April, describing Tuesday’s move as only a “slight tightening.”

“If they had announced a more aggressive tightening today, then that would have dampened expectations for April,” she said.

The Monetary Authority of Singapore (MAS), which manages monetary policy through exchange rate settings, said it would slightly raise the rate of appreciation of its policy band.

The width of the band, known as the Nominal Effective Exchange Rate, or S$NEER, and the level at which it is centered will be unchanged.

The MAS, which typically holds scheduled policy reviews twice a year, once in April and then in October, last surprised with an off-cycle move in January 2015 when it eased its policy after a collapse in global oil prices.

Last year, many Asia-Pacific economies largely shrugged off inflationary threats that had rattled policymakers in Europe and the United States but that thinking now appears to be shifting.

Elsewhere, investors expect the US Federal Reserve to raise its benchmark interest rate in March with the central bank likely to step up its rhetoric against inflation at its meeting this week.

Singapore’s policy move comes just a day after data showed core inflation in the city-state climbed in December by the fastest pace in nearly eight years.

“This move builds on the preemptive shift to an appreciating stance in October 2021 and is appropriate for ensuring medium-term price stability,” the MAS said, referring to its tightening move late last year.

The central bank is due to review its stance in April, when it was widely expected by economists to tighten again.

The Singapore dollar strengthened to 1.3425 versus the US dollar, its highest since October 2021.

Singapore’s bellwether economy is expected to grow 3% to 5%, unchanged from earlier forecasts.

“2022 will be year of double tightening for Singapore – both fiscal and monetary levers will grind tighter,” said OCBC’s Ling.

The MAS expects Singapore’s economic recovery, which has so far been led by the trade-related and services sectors, to extend to the domestic-oriented and travel-related sectors this year as COVID-19 restrictions are eased.

Singapore has vaccinated 88% of its 5.5 million people against COVID-19 and 55% have received booster shots.

“While core inflation is expected to moderate in the second half of the year from the elevated levels in the first half as supply constraints ease, the risks remain skewed to the upside,” the MAS said.

Singapore will release its annual budget on February 18, when the government is expected to announce the timing for an anticipated hike in goods and services tax.

The city-state’s economy grew 7.2% in 2021, its fastest pace in over a decade, rebounding from a record 5.4% contraction in 2020. The government has spent more than S$100 billion over the last two years to cushion its economy from the impact of the pandemic.

Instead of interest rates, the MAS manages policy by letting the local dollar rise or fall against the currencies of its main trading partners within an undisclosed band.

It adjusts its policy via three levers: the slope, midpoint, and width of the policy band. – Rappler.com