HOUSING. A view of the Pinnacle at Duxton public housing apartment blocks in Singapore, August 19, 2022.

Facebook Twitter Copy URL
Copied
While million-dollar flats in Singapore are still less than 2% of total transactions, a record 259 public flats were sold for S$1 million or more in 2021

SINGAPORE – Hundreds of public housing apartments in Singapore, one of the world’s most expensive cities, are being sold for over 1 million Singapore dollars ($716,000) as COVID-19-related construction delays create a shortage of new units.

At least two units have surpassed the million-dollar mark in US dollars, and the high prices are fueling talk of new government measures to try to cool thriving property markets.

The Southeast Asian city-state’s public housing system – which sells government-built apartment units directly to citizens on a 99-year lease – has led to over 80% of Singaporeans owning their homes, one of the world’s highest rates.

Many units – known as Housing and Development Board (HDB) flats – are conveniently located near train stations and malls and cater to various socioeconomic groups.

As ownership is transferable to both citizens and permanent residents after five years, a resale market has emerged. Some apartments originally purchased for around S$500,000 are now fetching double that, depending on size and location.

The most expensive resale public flat – a spacious 122-square-meter (sqm) unit close to train stations and schools and with 92 years’ lease left – sold this year for S$1.418 million.

For decades, Singaporeans have used their HDB flats for extra cash by renting them out or reselling at a profit.

“Million-dollar HDB flats are here to stay, as there will always be people who like to live in central locations or larger spaces but unable to afford private condos,” said Clarence Long, who brokered a 113-sqm public flat sale for S$1.4 million in May.

“If you’re looking at private condo of similar size in the same location, the price could easily be S$2.5 million,” Long said.

Unlike HDB flats, private condos in Singapore typically have security guards and facilities including swimming pools and gyms.

Most first-time public flat buyers can apply for government housing grants and loans, making them less affected by rising bank interest rates, and keen to exit the rental market that has also soared amid the pandemic.

The proportion of monthly income used for mortgage payments has for three years remained at about 23% on average for public flat buyers with government loans, the government said late last year.

Pricey Singapore rents go through the roof even as population dips 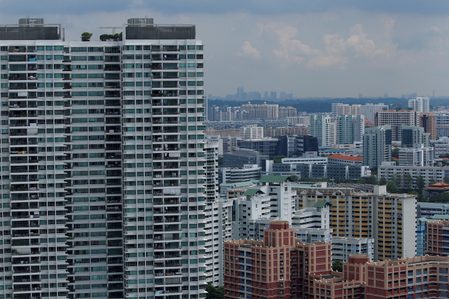 While million-dollar flats are still less than 2% of total transactions, a record 259 public flats have been sold for S$1 million or more last year, official data shows, and there have already been about 230 by August this year.

Those finding the resale market unaffordable can seek to buy off-plan public flats directly from the government, known as HDB Built-To-Order (BTO) public flats, typically selling for about S$300,000 to S$700,000.

However, most popular BTO projects are overly subscribed and take around five years to complete construction, pushing many to the resale market.

The Ministry of National Development said last month the government planned to ramp up supply of new BTO flats to meet demand.

“There is a possibility that the government may consider another round of cooling measures given the rising prices in both public and private residential markets,” said Christine Sun, the senior vice president of research & analytics at OrangeTee & Tie.