PANDEMIC. A woman and her infant line up for the government's emergency subsidy program.

The Philippine economy is likely to recover slower than initially projected, as the government keeps its conservative stance on spending and failed to contain COVID-19 transmissions despite harsh lockdowns.

The Washington-based multilateral lender’s projection is also much lower than the 6.5% to 7.5% forecast of Duterte’s economic managers.

World Bank chief economist for East Asia and the Pacific Aaditya Mattoo noted that the Duterte administration’s harsh lockdown measures have “imposed a big cost on the economy without delivering a commensurate benefit in terms of containment of the disease.”

Sought for comment, Socioeconomic Planning Acting Secretary Karl Chua told reporters that it is still “too early in the year to make changes” in growth projections.

Mattoo also emphasized that the Philippines is unsuccessful in transitioning away from shutdowns to more efficient containment strategies.

“With shutdowns, there is a big trade off with lives and livelihoods. You will hurt livelihoods, but you will save some lives. But testing, tracing, you can get a double boost, you contain the disease and also boost the economy because you create greater confidence,” he said.

The Philippines has been under lockdown for a year, with capital Manila and neighboring provinces now imposing a somewhat stricter border control due to a surge of cases and declining hospital capacity. 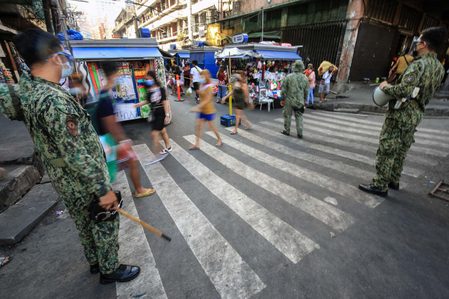 The World Bank also noted that the Philippines is in the lower half of 15 countries in the region in terms of vaccine rollouts. (READ: SCHEDULE: Philippines’ COVID-19 vaccine deliveries)

Mattoo warned that the population’s hesitancy and skepticism on vaccines may further delay recovery.

Meanwhile, the economist also pointed out that the economic team has been underspending despite sectors, which depend heavily on face to face interactions like tourism, taking a big hit.

“[The] Philippines is one of the countries that suffered hard to contain the disease. It is also tourism-dependent and dependent on remittances and exposed to natural disasters,” he said.

Lawmakers have been pushing for a P1-trillion fiscal stimulus package, but Finance Secretary Carlos Dominguez III earlier said that the response must be “affordable.”

Chua earlier thumbed down the proposal, noting that it is “not fundable.”

Critics and economists slammed these statements, pointing out that the government went ahead with an infrastructure push despite the pandemic. – Rappler.com