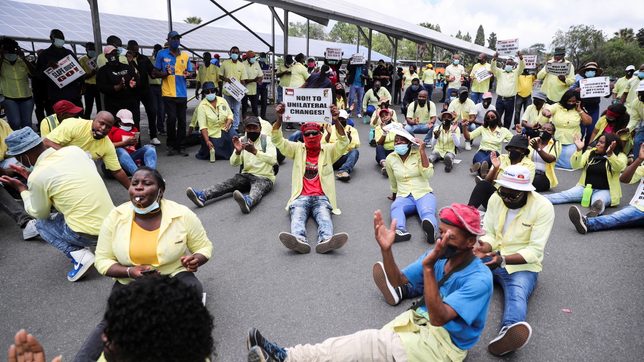 STRIKE. Workers disgruntled over low wages and changes to terms and conditions of employment go on strike outside a Massmart Holdings-owned Makro store in Johannesburg, South Africa, November 19, 2021.

Thousands of workers, disgruntled over low wages and changes to terms and conditions of employment, went on strike on Friday, November 19, at companies owned by Walmart-led Massmart Holdings in South Africa, a labor union said.

The South African Commercial Catering and Allied Workers Union (SACCAWU), an affiliate of the powerful Congress of South African Trade Unions (COSATU), said it expected the indefinite strike to draw in more than 18,000 members across the country.

“We expect all the members to join the strike,” said SACCAWU spokesperson Sithembele Tshwete, adding some workers started picketing outside some Massmart stores at 0400 GMT.

Massmart said contingency plans have been implemented to ensure continued smooth operations, which includes deploying experienced contract employees to its stores. It said all its stores were operating smoothly and that fewer than 23% of SACCAWU’s membership were taking part in the industrial action.

There was no sign of disruption to operations at some Massmart stores visited by Reuters on Friday such as food and general merchandise wholesale chain Makro and Builders Warehouse.

At one Makro shop in Johannesburg, workers in uniform shouted “we’re fighting for our rights” outside the store, carrying placards including one that read “Before Walmart, many jobs after Walmart, jobs shedding.”

The union has said it had exhausted all efforts to resolve labor disputes with Massmart, which also owns Game stores, and was left with no option but to go on strike.

The union is also disputing unilateral restructuring and changes to terms and conditions of employment, which includes a reduction in working hours from 195 hours to 120 hours a month at some distribution centers.

The union also wants workers who lost jobs as a result of restructuring at general merchandise Game chain to be reinstated. Massmart has said it had identified alternative jobs for those workers.

Tshwete said there were no immediate plans for the union to resume talks with Massmart.

“No one wins in a strike and notwithstanding that SACCAWU has been unresponsive, we continue to keep open lines of communication with them,” Massmart senior vice president of group corporate affairs Brian Leroni said. – Rappler.com