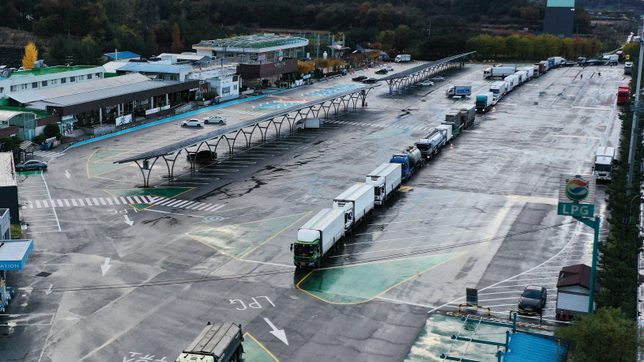 QUEUE. Trucks wait in line to get urea at a service area in Yeoju, South Korea, November 8, 2021.

The South Korean government started rationing urea solution, used to cut diesel car and industrial emissions, and banned its resale as panic buying by drivers exacerbated an acute shortage that could bring transport and industry to a grinding halt.

Passenger vehicle drivers will be given a purchase limit of 10 liters and commercial vehicle drivers 30 liters, with all resale banned under a set of measures that will be implemented through to the end of the year, the trade ministry said on Thursday, November 11.

Producers and sellers of the solution are required to report all import, production, sale, and inventory data to the government on a daily basis, the ministry said in a statement.

Approximately 2 million diesel vehicles, mostly cargo trucks but also passenger vehicles, are required by government to use the additive, according to industry experts. All exports are banned effective immediately.

Sales of urea solution are only allowed at gas stations with an exception that urea solution suppliers obtain prior permissions from authorities for “unavoidable reasons.”

Diesel car drivers are required to provide their identification and car registration number when purchasing urea solution at gas stations, according to the trade ministry.

Prime Minister Kim Boo-kyun apologized for failing to anticipate the shortage during a special Cabinet meeting, and said it would be some time before supply can be normalized.

South Korea sent a military tanker plane to Australia this week to bring back urgent supplies, and has scrambled to find alternative suppliers, while also using diplomatic channels to ask China for help easing the shortage. – Rappler.com