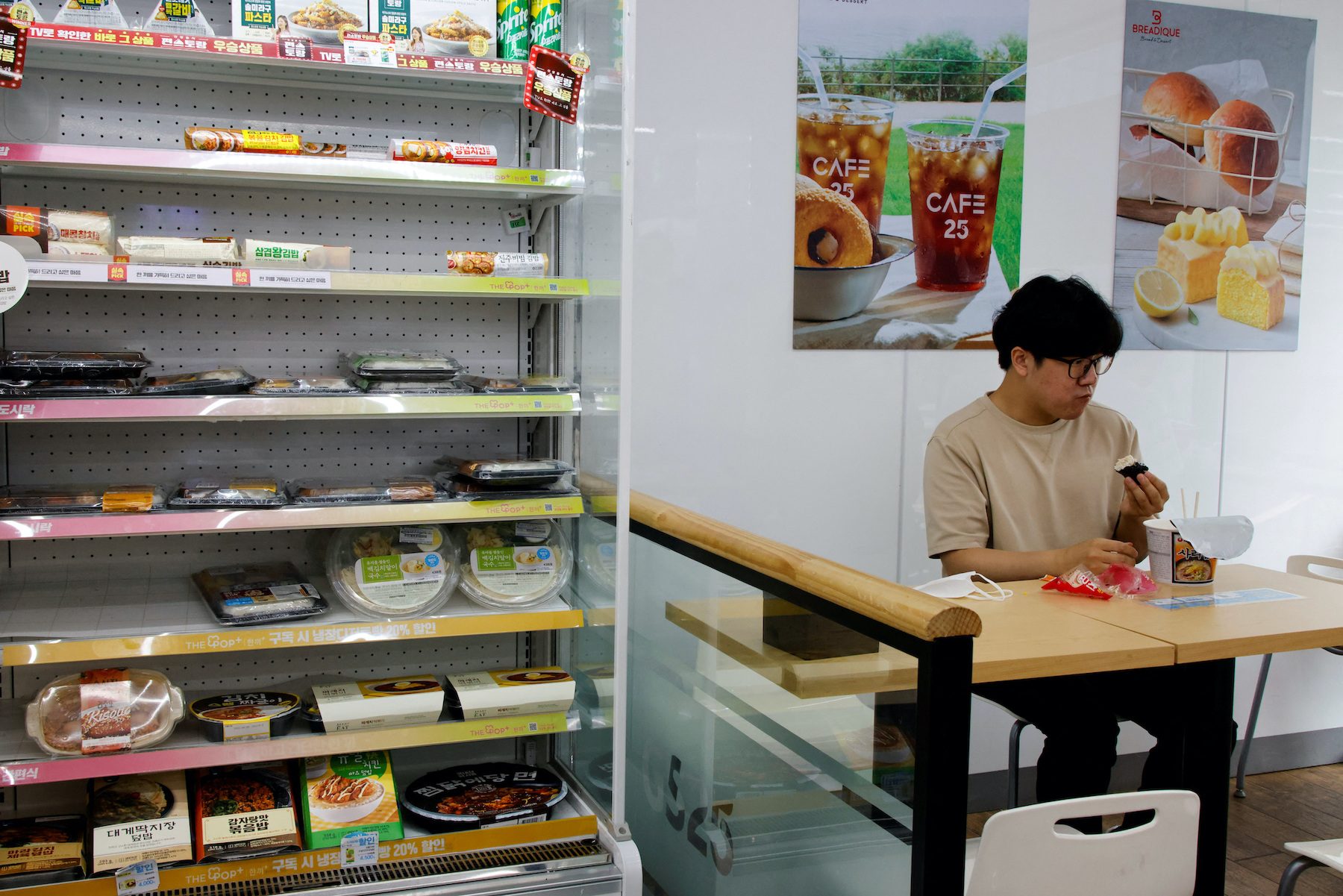 INFLATION. An office worker eats his lunch at a convenience store in Seoul, South Korea, June 24, 2022.

SEOUL, South Korea – Office worker Park Mi-won had never bought her lunch from a convenience store, until her favorite lunch buffet recently raised prices by more than 10% to 9,000 won ($7) as South Korean inflation soared to a 14-year high.

“After the price rise, I went to convenience stores instead, where I thought the prices were reasonable while food also tasted good,” the 62-year-old said. “So now I go there two to three times a week.”

Global food prices surged 23% last month from a year before, according to an agricultural arm of the United Nations. The war in Ukraine has impacted supplies of grains from there and Russia, and caused energy and fertilizer prices to soar.

South Korean convenience shop chain GS25 posted more than 30% increases in sales of instant meals in January-May versus a year ago.

Peers including CU and 7-Eleven have seen similar surges in demand, while Emart24 saw a 50% jump in lunch-box sales in areas with a large number of office blocks.

Those gains came as the prices of restaurant dishes in South Korea rose 7.4% last month compared with a year earlier, the fastest pace in 24 years.

Dubbed “lunch-flation,” the price of beloved dishes such as galbitang (beef stew with rice) jumped 12.2% and nengmyun (cold noodles) rose 8.1%, according to government statistics.

While convenience store lunches have not been immune from rising costs, their much lower overall prices have helped them gain in popularity.

Around the capital Seoul, average nengmyun prices recently broke above 10,000 won, according to Korea Consumer Agency data, whereas instant ramen noodles are still available at slightly above 1,000 won at convenience stores.

The Bank of Korea estimates each 1% price rise in imported agricultural products will push up processed food prices by 0.36% in the next year and restaurant prices by 0.14% in next three years.

“As a matter of fact, I need to raise the price even higher,” said Lee Sang-jae, who runs a galbitang restaurant in Seoul’s central district and has already raised prices twice this year, to 12,000 won from 10,000.

“Instead, I am giving up some of my profit margin, as I also have to consider office workers’ light wallets these days.”

In a survey by a human resources firm Incruit last month, 96% of 1,004 office workers said they now found lunch prices burdensome. Among those, almost half were looking for ways to cut lunch spending.

But in South Korea, lunchtime has been regarded sacred among office workers, who often mingle with friends and colleagues for longer than the allotted hour at busy diners.

“It is much cheaper than going to a restaurant, but the downside is we cannot have lunch altogether here,” said Ku Dong-hyun, 28, chomping on gimbap and ramen noodle from a GS25 for his Friday lunch.

While many small restaurants are still benefiting from a bounce-back in evening dining after months of COVID-19-induced social distancing rules, economists warn prolonged pressure on consumer prices will weigh on consumption.

“Real purchasing power is shrinking amid fierce inflation pressures, but people don’t want to cut down evening gatherings they just started, while on lunches they can,” said Lee Seung-hoon, chief economist at Meritz Securities.

“As high-marching consumer prices last longer and longer, it will start to weigh on private consumption, and when it does, together with worsening external conditions for exports, it will raise questions about the central bank’s aggressive monetary tightening that we are seeing now.” – Rappler.com