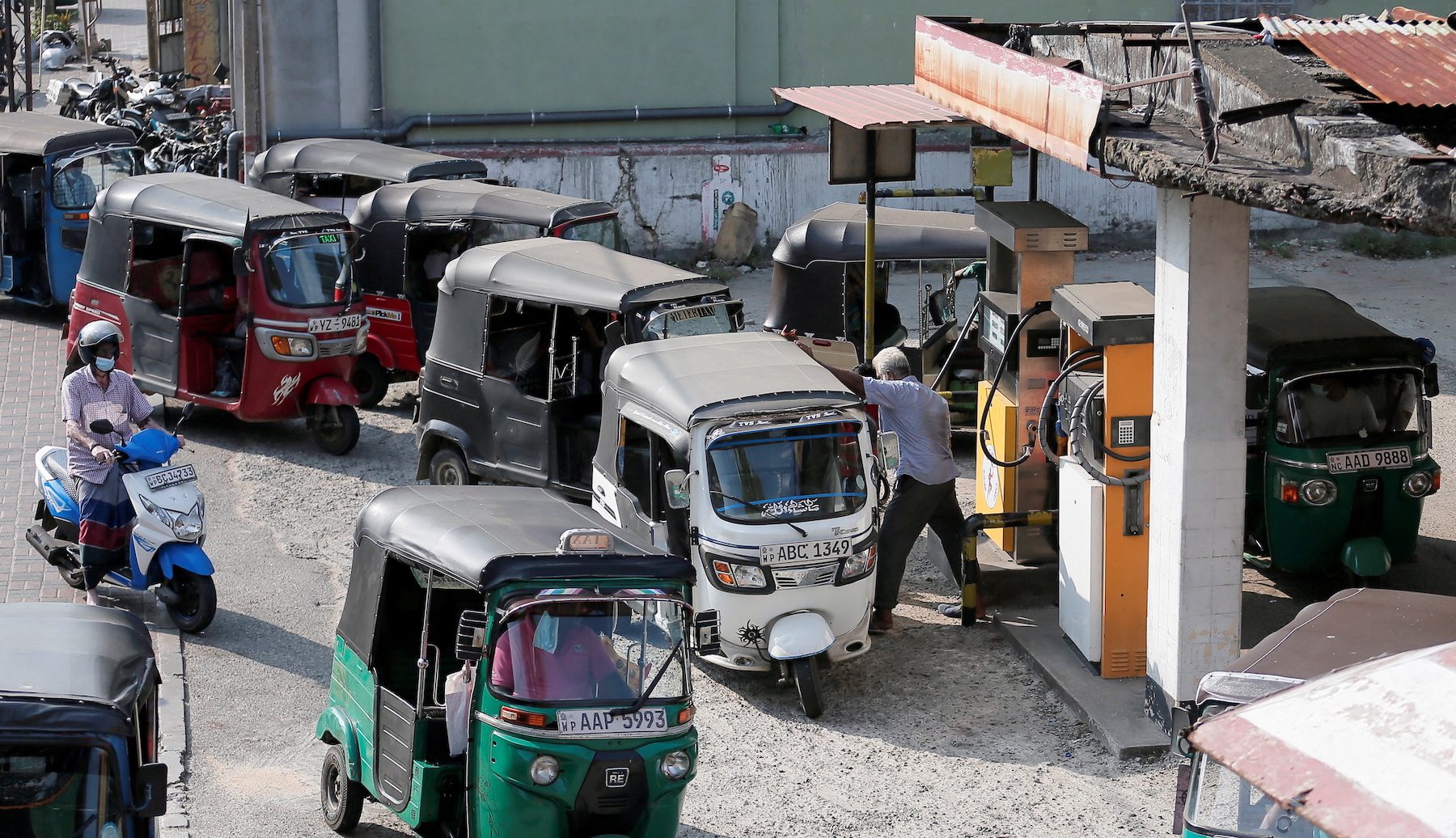 REFUELING. Three-wheeler drivers wait in line to top up their tanks at a Ceylon Petroleum Corporation fuel station in Colombo, Sri Lanka, February 21, 2022.

COLOMBO, Sri Lanka – Sri Lanka paid $35 million for a diesel shipment on Wednesday, February 23, and has another large payment due this week, an official said, as the country struggled to import fuel for power generation and to keep its transport system running amid dwindling foreign exchange reserves.

Residents in the island nation of 22 million people, which is in the throes of its worst economic crisis in years, have experienced hours-long power cuts as power plants and petroleum pumps have run dry.

The crisis has raised fears the country may be headed for a sovereign default this year.

A bus owners’ association warned that much of its fleet would be paralyzed within days unless fuel supplies were restored.

“The problem facing the country is not a power generation or fuel shortage but the non-availability of dollars,” Energy Minister Udaya Gammanpila told parliament on Wednesday.

Sri Lanka’s foreign exchange reserves hit $2.6 billion at the end of January, according to central bank data, but some analysts said usable reserves were significantly less than that.

On Wednesday, the state-run Bank of Ceylon released $35.3 million to pay for a 40,000-ton shipment of diesel that had been waiting at the country’s main port of Colombo for four days, said Energy Ministry Secretary KDR Olga.

But a second ship carrying a similar amount of diesel worth $33 million is due to arrive at Colombo Port on Sunday, February 27.

“We will need fresh funds to make that payment,” Olga said.

A 38,300-ton petroleum shipment for $33 million procured on a letter of credit has already reached Sri Lankan waters and can be offloaded, she said.

The diesel shortage has hit Sri Lanka’s power generation with power cuts increasing to more than four hours on Wednesday.

Outside fuel stations, some of which have received limited amounts of supplies from state-run Ceylon Petroleum Corporation, drivers formed long queues to refill their tanks.

“We are calling on the government to resolve this issue quickly or people will be left stranded on the streets,” said Anjana Priyanjith, secretary of the Private Bus Owners Association, which represents a fleet of around 9,000 vehicles.

“This is a very serious situation,” he said.

Sri Lanka’s usable reserves at the end of January were around $790 million, forcing the government to ration foreign exchange even for critical imports, said Deshal de Mel of the Colombo think tank Verite Research.

The country has to settle $1.84 billion of liabilities in the months of February and March 2022, De Mel said. Overall, Sri Lanka has to meet about $4 billion in debt repayments in 2022. – Rappler.com