The company behind an app used to distribute COVID-19 cash aid rejected corruption claims of Senator Manny Pacquiao, saying that its transactions were aboveboard and accounted for.

Starpay on Monday, July 5, said that more than 5 million beneficiaries were given cash aid through its platform “in a very short period of time.”

The company added that it has liquidated the funds it received and also refunded the amount for unserved beneficiaries, which totaled P8.2 billion, to the Department of Social Welfare and Development (DSWD).

Starpay, which began dealing with the DSWD in June 2020, said it was initially awarded coverage of just 1.6 million beneficiaries. But with 5 million beneficiaries covered, this meant that Starpay even “went above and beyond the original allocation” set by the government.

Pacquiao earlier claimed that the DSWD’s deal with Starpay to disburse emergency aid was laced with corruption, as some 1.3 million beneficiaries allegedly did not receive financial assistance and some P10.4 billion had gone missing.

Pacquiao also said only 500,000 beneficiaries were able to download Starpay’s app and claim the money. 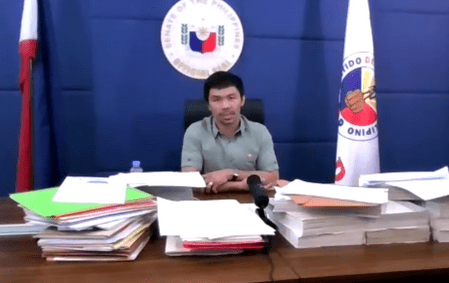 “With our large partner network, we were able to expand and assist several million more beneficiaries to receive their much-needed amelioration. This was achieved because of our unique online and offline distribution model, where beneficiaries without smartphones were given reference numbers to claim their amelioration at their own time and convenience,” Starpay said.

Starpay also denied Pacquiao’s claim that it only has a capitalization of P62,000.

“The required capitalization to apply for an EMI (electronic money issuer) license is P100 million, which we complied with in 2017 as a prerequisite by the BSP (Bangko Sentral ng Pilipinas) for any EMI license application,” the company said.

“Senator Manny Pacquiao’s statement during his press conference that our current capitalization is P62,000 is incorrect, while the correct and accurate figures are easily verifiable with the Securities and Exchange Commission.”

The DSWD already said it is willing to face “any investigating body” and present evidence to dispute the allegations of the boxer-turned-senator.

Pacquiao, who just flew to the United States for his August 21 fight against Errol Spence Jr., has yet to present evidence to back up his claims. – Rappler.com