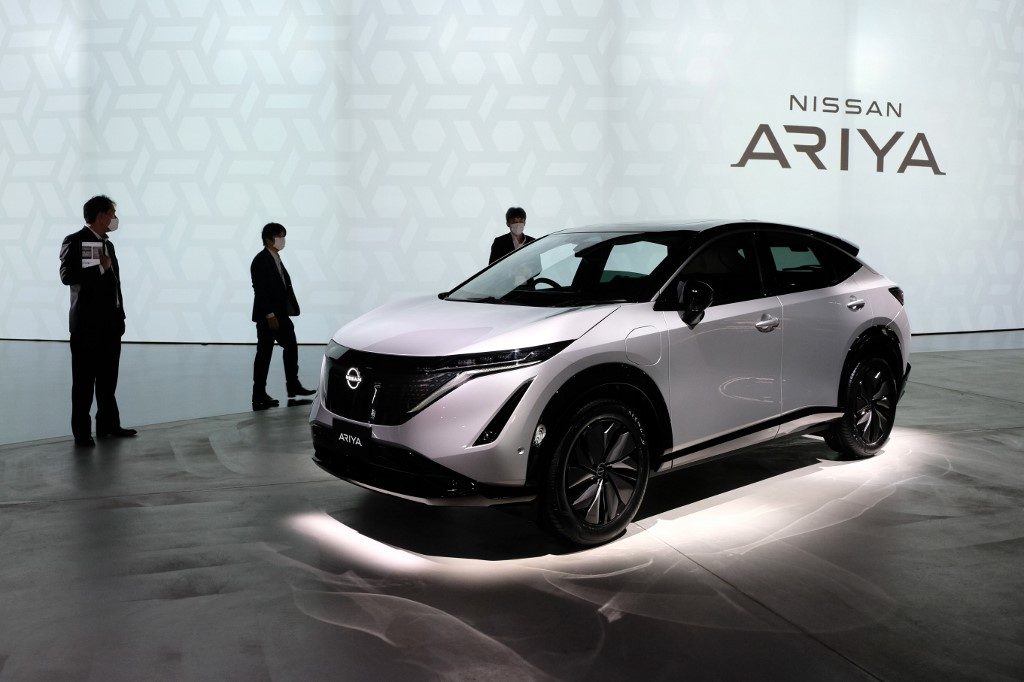 This picture taken on July 14, 2020 shows Nissan's new electric SUV, Ariya, during a press preview at the Nissan Pavilion in Yokohama. (Photo by Kazuhiro NOGI / AFP)

Nissan on Wednesday, July 15, unveiled the Ariya, a new 100% electric crossover model that the boss of the struggling Japanese car manufacturer said would open a “new era” in the firm’s fortunes.

It was the first completely new model produced by Nissan since the Kicks in 2016 and the first electric model targeting the general market since the Nissan Leaf that first rolled off the factory floor 10 years ago.

Presenting the new car at the firm’s Yokohama HQ, Nissan chief executive officer Makoto Uchida said it would play a “key role as a brand driver and the face of Nissan for the new era.”

“Ariya is a blend of our two core strengths: EV (electric vehicles) and crossover expertise,” said Uchida, who also unveiled a new corporate logo for Nissan.

The Ariya has a range of 610 kilometers (380 miles) and should hit dealerships in Japan from the middle of next year with a price tag of around 5 million yen ($47,000).

Nissan aims to roll out the new model in Europe, the United States, and China towards the end of 2021, the firm said in a statement.

In May, the firm revealed an annual net loss of $6.2 billion, announced it would shut its Barcelona plant and slash production, as it also wrestles with the impact of the coronavirus pandemic.

At the same time, Nissan unveiled a 4-year plan that will involve cutting global production by 20%.

“It’s a big number” but Nissan could get close to it because China recently decided it would “more or less accept hybrid vehicles,” said Tatsuo Yoshida, Bloomberg Intelligence automobile analyst.

However, the analyst also noted that “Nissan was an EV pioneer with the Leaf but the group has been now kind of overrun in that segment.”

“It was a pioneer 10 years ago but no longer. Nissan leadership in EV was in the past. The competition is very intense. They still have technology but it’s not Nissan only anymore,” the analyst told Agence France-Presse.

After the Ariya, Nissan plans to launch 7 other 100% electric vehicles between now and 2023, aiming mainly at the Chinese, European, and domestic markets.

The group will launch 12 new models – of all types – over the next 12 months. – Rappler.com