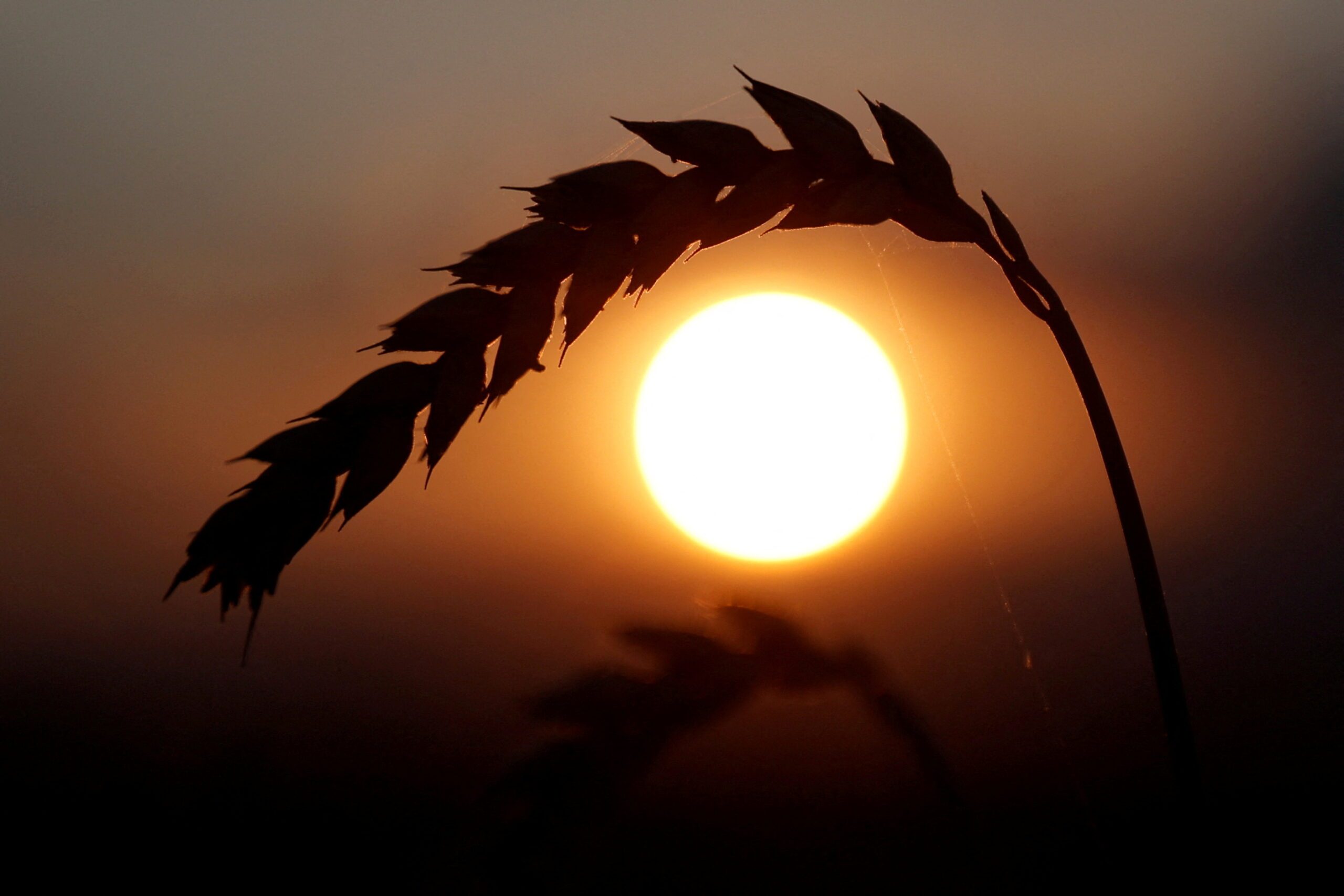 WHEAT. An ear of wheat is seen in a field near the village of Hrebeni in the Kyiv region, Ukraine, July 17, 2020.

Facebook Twitter Copy URL
Copied
As Kyiv looks for alternative export routes by land, that effort has been hampered by logistical challenges and red tape

LVIV, Ukraine – In western Ukraine, some 1,100 train wagons carrying grain are stuck near the main rail border crossing with Poland, unable to transport their cargo abroad.

They are just some of the 24,190 wagons carrying various goods for export, including vegetable oil, iron ore, metals, chemicals, and coal, that were waiting to cross Ukraine’s Western border as of Tuesday, April 5, according to data from the state-run railway company that hasn’t previously been reported.

With war raging along the country’s southern coast, and its main ports blocked off by Russia’s invasion, Ukraine is struggling to export its grain and other goods, according to government officials and industry insiders. But as Kyiv looks for alternative export routes by land, that effort has been hampered by logistical challenges and red tape, industry officials and commodity traders say.

Valerii Tkachov, deputy director of the commercial department at the state-run railway company Ukrzaliznytsia, said that 10,320 wagons – or about half of the total – are waiting at the junction near the village of Izov, the main rail border crossing into Poland. Sitting some 130 kilometers north of Lviv, the junction serves as a gateway for reaching the Polish seaport of Gdansk.

One key issue: the sheer volume of goods that needs to find an alternate route, which is causing shortages of everything from rail cars to staff, according to industry insiders and the government. Ukraine, one of the world’s biggest grain exporters, had prior to the war exported 98% of its cereals via the Black Sea. Typically, only a fraction of the country’s exports went by rail, where transport costs are higher than shipping.

Those difficulties are being compounded by logistical issues, such as differences in rail-track gauges used in Ukraine and neighbors such as Poland – a legacy from when Ukraine was part of the Soviet Union. While the west of the country has been spared by the worst fighting, there have been missile strikes near Lviv, including on oil facilities, and security around the border is very tight.

The disruptions to Ukraine’s exports mean that countries that rely on imports of Ukrainian grain – including China, Egypt, Turkey, and Indonesia – will need to find alternative supplies or face food shortages, aid agencies have warned.

Russia’s February 24 invasion of Ukraine has heightened concerns about global food security, sending prices of global grain, fertilizer, and fuel soaring. Global food prices have been rising since mid-2020 due to disruption to planting and harvest in many countries during the first year of the COVID-19 pandemic, and later due to supply chain problems.

Even as Russia scales down operations around Kyiv and the northern region of Chernihiv to focus on battles in the east, the prolonged blockade of ports in the south is dealing a major blow to Ukraine. Grain exports are a cornerstone of Ukraine’s economy – totaling about $12.2 billion in 2021 and accounting for nearly a fifth of all the country’s exports, according to official data.

The Ukrainian government didn’t respond to a request for comment. Ukraine has said that grain exports last month fell to a tenth of the figure of March 2021 amid port closures and that the disruption impacts people in many countries. “Hundreds of millions of people around the world will not receive food unless Russia’s blockade of Ukrainian ports is lifted in the near future,” the agriculture ministry said in an April 1 statement.

Russia launched what it calls a “special military operation” in Ukraine, aiming to demilitarize and “denazify” Ukraine. Ukraine and the West say the invasion was illegal and unjustified.

The Kremlin didn’t respond to a request for comment. Russia has denied deliberately targeting civilians and civil infrastructure, despite documented attacks on hospitals, apartment buildings, and railroads.

Ukrainian farmers – who produced a record grain crop last year – say their wheat yields could be cut in half, and perhaps more. Russian forces are repeatedly damaging grain storage facilities in eastern Ukraine, a US official has said. Kyiv and Moscow have accused each other of laying mines in the Black Sea, creating dangers for merchant shipping.

The war has upended the country’s agriculture sector and “has destroyed Ukraine’s roads, railways, and rail stations that facilitate overland transportation,” a US official told Reuters last week. “As Putin’s war continues, more and more arable Ukrainian land is ruined by Russian tanks, shells, and landmines – risking a much longer-term food crisis.”

Ukraine and Russia are major wheat exporters, together accounting for about a third of world exports – almost all of which passes through the Black Sea. Its waters are shared by Bulgaria, Romania, Georgia, and Turkey, as well as Ukraine and Russia, which have been at war since President Vladimir Putin invaded his southern neighbor on February 24.

Clearing the backlog could take a long time.

Because the Ukrainian railway network uses a Russian gauge measuring roughly 1.5 meters, or some 10 centimeters more than the tracks used in most of Europe, railway staff have to lift wagons with a jack and manually change the chassis to fit the Polish tracks, Tkachov said. Alternatively, they can unload the grains from the Ukrainian wagons and pour them into the Polish ones – a process that can take up to half an hour per wagon.

Tkachov, from the state railway, told Reuters there are currently up to 500 wagons crossing the border near Izov per day – effectively a three-week backlog. He added that there are another dozen crossing points, many of which aren’t backed up.

The state railway is working to increase capacity to 1,100 wagons of grains a day crossing into Poland, Romania, Hungary, and Slovakia within three months – nearly a tenfold increase from its March level, he said.

It is hiring more people and buying equipment to help switch the rail chassis, diverting staff from passenger trains to cargo transport, and also working to ease other hurdles, such as customs procedures, according to Tkachov.

“We are working to speed up the process…reducing the number and duration of wagon inspections, and the amount of paperwork,” he said.

One company impacted by the backlog is Astarta Holding NV, a Ukraine-based food producer. The company had agreed to deliver 25,000 metric tons of corn to European customers in April, but had yet to receive the required all-clear from railway authorities, according to Julia Bereshchenko, Astarta’s investor relations and business development director.

Astarta said it also has some 150,000 tons of grains, mostly corn, sitting idle in its silos. At this time of the year, the tall storehouses should be almost empty, it said.

Official figures released by the government on Sunday, April 3, cited exports of 1.4 million tons of corn and wheat in March. That was about a quarter of February’s figure and down from some 3 million tons in March 2021.

Analysts have said Ukraine, which had exported 43 million tons of grain from the start of the season in July up to the invasion in late February, could export only around 1 million tons in the next three months, due to logistics difficulties. Before the war, the government forecast grain exports could reach 65 million tons this season.

Vysotskiy, in his remarks to television Monday, expressed hope that Ukraine might be able to export 1.5 million tons a month by rail, adding that would be only a third of volumes typically handled by the ports but would still generate some much-needed income for the agricultural sector.

‘Drop in the ocean’

Commodity traders, such as Cargill, are looking for ways to get foodstuffs out of the country but there is no easy fix, an industry source said.

Kyiv is in talks with Romania on shipping its agricultural commodities via the Romanian Black Sea port of Constanta, the agriculture ministry said on March 30. That would involve transporting the grains by rail to cargo ports on the Danube river and then uploading them onto barges for sailing towards Constanta, industry officials said.

Once at the Romanian port the grains would have to be moved across to large vessels for shipping worldwide – making the whole process complex and costly. According to APK-Inform, a Ukrainian agriculture consultancy, the cost of delivering Ukrainian grain to the Romanian port of Constanta was 120 to 150 euros ($133 to $166) per ton.

Before the war, traders paid around $20 to $40 per ton to transport grain to Ukraine’s Black Sea ports.

Any hopes of a quick reopening of that route was further dashed at the weekend. On Sunday, Russian rockets hit the port of Mykolaiv and also struck oil facilities near the major hub of Odesa on the Black Sea, local officials said. Russia’s defense ministry said its missiles had destroyed an oil refinery and three fuel storage facilities near Odesa. It said they had been used by Ukraine to supply its troops near Mykolaiv.

The Ukraine government says it is also worried about the country’s own food supplies, even though it says it has enough stocks for three years.

Last month, Ukraine suspended exports of rye, oats, millet, buckwheat, salt, sugar, meat, and livestock since the invasion, and introduced export licenses for wheat. The government said it would allow free exports of corn and sunflower oil, however.

A manager at one of the main foreign commodity traders operating in the country said that even if the country succeeded in boosting its agricultural export capacity to 700,000 tons a month to 1 million tons a month by rail and via the Danube quickly, that would just be a “drop in the ocean.”

“We may reach 10% to 15% of the capacity that is actually needed,” he said. “I believe the risks for the economy are huge.” – Rappler.com