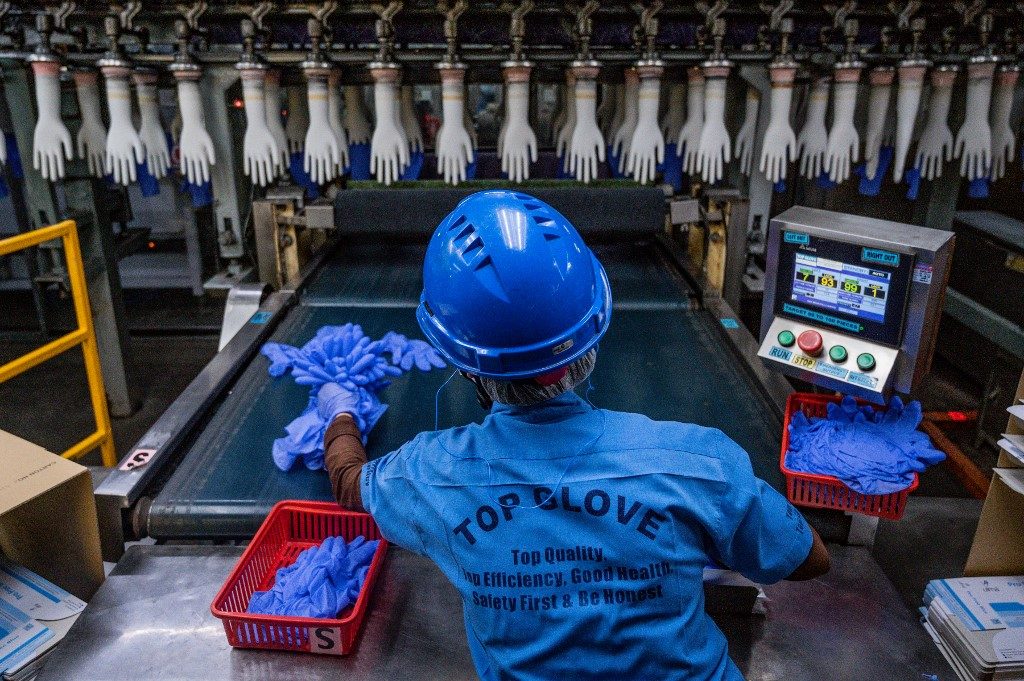 TOP GLOVE. In this file photo taken on August 26, 2020, a worker inspects disposable gloves at the Top Glove factory in Shah Alam on the outskirts of Kuala Lumpur, Malaysia.

A Malaysian company that is the world’s biggest manufacturer of surgical gloves will close over half of its factories after a surge in coronavirus cases among workers, authorities said on Monday, November 23.

Top Glove has seen a huge jump in demand since the start of the pandemic as countries scrambled to stock up on protective equipment, pushing up both its profits and share price.

But there has been a cluster of virus outbreaks among Top Glove employees – many of whom are low-paid migrant workers – at factories in an industrial area near the capital, Kuala Lumpur.

More than 1,000 cases were recorded on Monday, prompting the government to order the plants to close.

“Based on advice from the ministry of health, it was agreed at a special meeting today to shut down 28 Top Glove factories…in stages to allow the workers to undergo tests and quarantine,” said Defense Minister Ismail Sabri Yaakob.

Top Glove said in a statement it would “cooperate fully with the relevant authorities to implement the temporary stoppage,” and plant closures had begun.

About 5,700 workers have already been screened and the rest will also undergo tests, it said. Top Glove did not say how the closures would affect its ability to meet orders.

The company operates 47 factories – 41 in Malaysia – and many of its workers are from Nepal and live in crowded dormitory complexes.

The company can produce more than 70 billion gloves a year and is a major global supplier.

Malaysia is battling a resurgent outbreak of the coronavirus which has infected more than 56,000 people and killed 337.

The country’s glove manufacturers – and other industries – have long been accused of mistreating migrant workers, and the United States in July banned the import of gloves from two Top Glove subsidiaries over concerns about forced labor. – Rappler.com