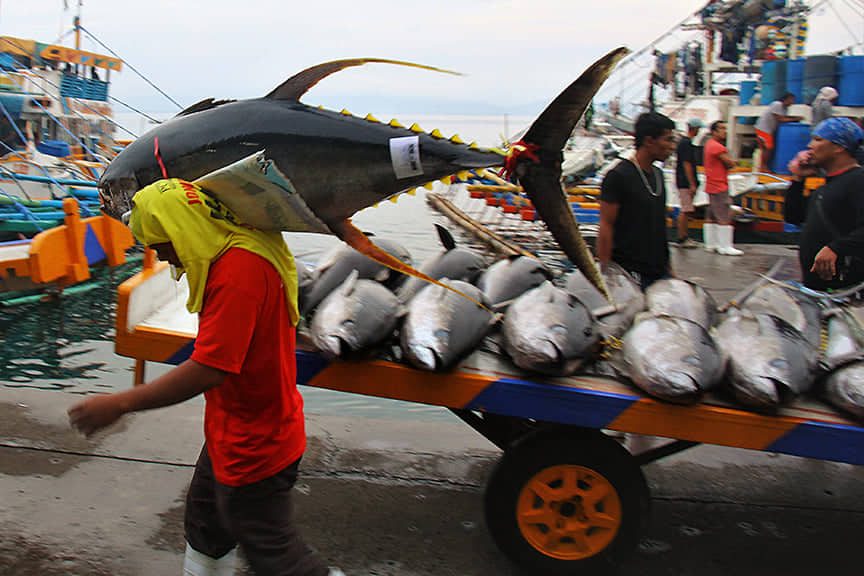 GENERAL SANTOS, Philippines – General Santos City’s fishing industry has taken a beating with the skyrocketing fuel prices that are threatening to deliver a fatal blow to the country’s tuna capital.

Local fishing industry leaders and fishermen grumbled as diesel, which is being used by fishing vessels, spiked by P6.55 per liter on Tuesday, June 7. The price of a liter of diesel in General Santos now averages P85.

At least 120,000 people rely on the fishing industry in the city, whose players include six tuna canneries, fishing fleets, and other downstream industries. The city’s annual exports have been pegged at around $57.89 million in the form of fresh, chilled, and frozen tuna.

Fishing operators said fuel costs take up about 60% of the total expenses in a normal fishing run.

Dominic Salazar, president of the Socsksargen Federation of Fishing and Allied Industries Incorporated, said fishing companies have been coping with the situation by lowering operational costs.

But with the recent big-time fuel price increases, prospects are bleak, Salazar said.

“It would be quite difficult to deal with the situation anymore for many industry players,” he warned.

Some companies are even considering temporarily shutting down operations as it is no longer viable to continue, Salazar said.

Should that happen, he said, there would be fewer fish caught to supply strong demand, and fish prices would shoot up to astronomical levels.

Salazar said, “Eventually, the economy suffers from losses in business and job opportunities.”

He said his group was closely coordinating with the government, trying to find immediate solutions to overcome the difficult situation, one of which is the call for the suspension of value-added tax and excise tax on fuel.

Salazar said these are remedies that can help many industry players stay afloat.

Another thing the government can do to help is to reduce fish imports so that fishing vessel operators and fishermen can sell their catch at better prices, he said.

Ruel Libawan of the Minanga Fishermen Association said Tuesday’s fuel price increase was already too much.

“Most of our income will just go to fuel expenses,” Libawan said.

Libawan said General Santos’ fishing industry and the fishermen have been making both ends meet for more than a year already. Some, he said, have already stopped fishing and looked for other work.

He said he hoped the government would give fisherfolk enough subsidy.

“Fishing has become expensive. We cannot go farther out to sea with the limited fuel we can afford to buy. Paddles won’t work. With our lesser catch, we can hardly buy our needs,” Libawan said. – Rappler.com