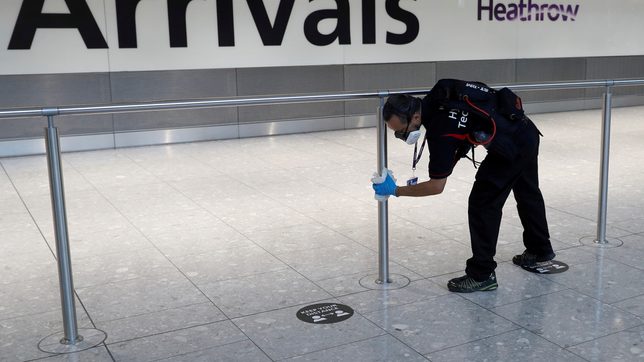 HEATHROW. A worker sanitizes a barrier at the international arrivals area of Terminal 5 in London's Heathrow Airport, Britain, August 2, 2021.

Facebook Twitter Copy URL
Copied
With COVID-19 putting huge financial strain on Heathrow and the airlines that use it, airport charges are the subject of a bitter row

Britain’s aviation regulator said that Heathrow, the country’s busiest airport, will not be permitted to increase passenger charges as much as it had wanted, as the hub and its airlines vie against each other to recover pandemic losses.

COVID-19 has restricted flying for more than 18 months, putting huge financial strain on Heathrow and the airlines that use it, including its biggest customer British Airways (BA), and making airport charges the subject of a bitter row.

Heathrow wants to be able to charge more to help recover its losses, but airlines don’t want to have to raise ticket prices to cover higher airport charges just when they are trying to stimulate passenger demand.

The CAA said its proposals, which will be finalized next year and cover the five years from summer 2022, struck the right balance between consumer interests and the airport.

Heathrow is owned by investors including Spain’s Ferrovial, the Qatar Investment Authority, and China Investment Corporation.

During the pandemic, its losses topped $4 billion as traffic fell by more than 80%.

BA parent company IAG, which made a 7-billion-euro ($8.15-billion) loss in 2020, said recently that Heathrow’s investors had already earned billions in dividends from the airport before the pandemic struck, and that now was the time for Heathrow to be price competitive against rival airports.

Last year Heathrow lost its crown as Europe’s busiest airport to Paris, and IAG says the west London hub is the most expensive in the world.

Responding to the proposals, Heathrow said that the regulator should safeguard a “fair return” for its investors.

“The settlement is not designed to shield airlines from legitimate cost increases or the impacts of fewer people traveling,” an airport spokesman said.

Under the CAA’s proposals, there would be no additional adjustment to Heathrow’s regulatory asset base, something which Heathrow had requested. It also outlined plans for introducing a new risk sharing mechanism to prevent either the airport or the consumer bearing all the risk of future uncertainty.

“These initial proposals seek to protect consumers against unfair charges, and will allow Heathrow to continue to appropriately invest in keeping the airport resilient,” CAA chief executive officer Richard Moriarty said in a statement. – Rappler.com