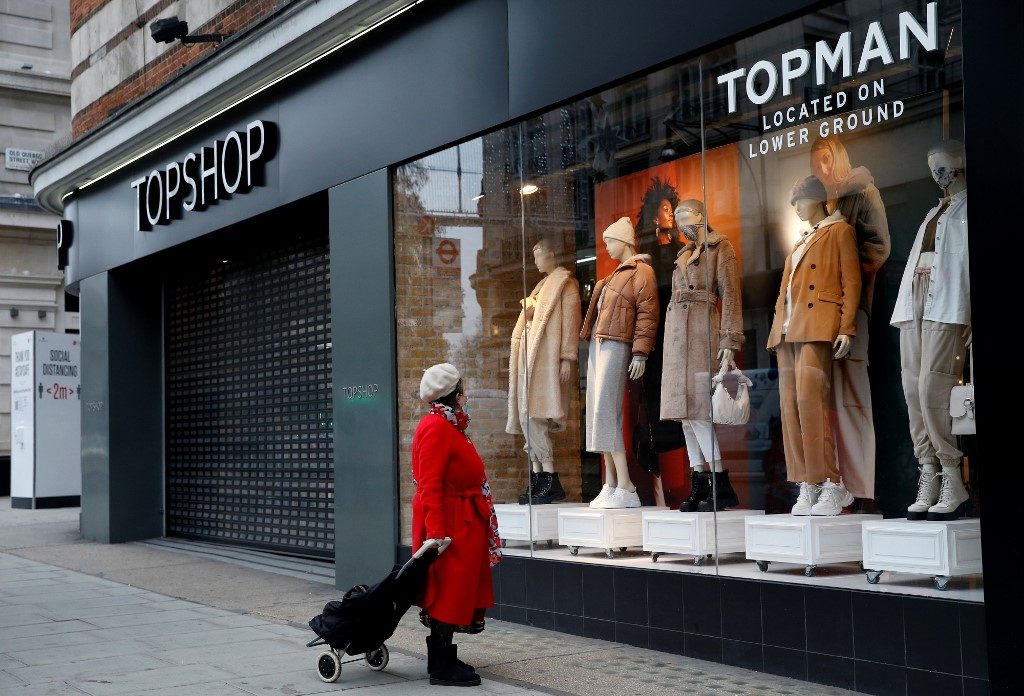 RETAIL SLUMP. A pedestrian looks at the window of a closed-down Topshop and Topman store, operated by Arcadia, in central London on November 30, 2020.

The group, which is comprised of 8 of the United Kingdom’s best known high-street and fashion retail brands and owned by controversial businessman Philip Green, will be administered by the consultancy firm Deloitte, according to a press release.

However, Deloitte has specified that there are no layoffs on the horizon and that trading will continue with a reopening of outlets this week as England emerges from a 4-week coronavirus lockdown.

“This is an incredibly sad day for all of our colleagues as well as our suppliers and our many other stakeholders,” Arcadia’s managing director Ian Grabine said in a statement.

“In the face of the most difficult trading conditions we have ever experienced, the obstacles we encountered were far too severe,” he added, referring to the loss of business during the pandemic.

The need to take administrative measures will come as a body blow to Arcadia boss Green and the COVID-19-hit British retail sector.

Green, 68, who was once dubbed “the king of the high street,” saw his reputation hit from the high-profile collapse of retailer BHS 4 years ago.

His bricks and mortar businesses have also suffered from increasing online competition from the likes of Boohoo and Asos.

“Frasers Group can confirm that Arcadia Group Limited have declined Frasers Group’s offer of a lifeline loan of up to £50m,” it said in a statement to the London Stock Exchange.

“Frasers Group were not given any reasons for the rejection,” it added.

Frasers had earlier said it “would be interested in participating in any sale process” should Arcadia fail to secure emergency funding and go into administration.

Arcadia announced on Friday, November 27, that the COVID-19 pandemic has had a “material impact” on trading due to enforced closures during lockdowns that have devastated retail across Britain.

Speaking ahead of the administration announcement, Gordon Fletcher, of the University of Salford Business School, said Arcadia’s failure would be a “significant blow to the high street” but that the issues in the group ran deeper than COVID-19.

Arcadia and its brands were paying the price of a “lack of focus on the consumer and its ability to keep pace with the changing expectations of retail.”

Back in 2015, Green sold retailer BHS for just £1 to Dominic Chappell, a former bankrupt businessman with no retail experience.

BHS then collapsed one year later, resulting in 11,000 job losses and leaving a massive £571-million deficit in its pension fund.

British lawmakers on Monday called on Monaco-based Green to cover the shortfall in the Arcadia pension fund, which is estimated to run as high as £350 million.

The head of parliament’s cross-party Work and Pensions Committee, Stephen Timms, said Green should dip into his own pocket to ensure workers do not miss out.

“There is unquestionably a moral case for the Green family to do the right thing and guarantee Arcadia’s hardworking staff what is rightfully theirs, whatever happens this Christmas,” he said.

Green, whose net worth was estimated at £930 million on this year’s Sunday Times Rich List, last year paid £363 million to plug the gap in the BHS pension scheme.

The human fallout of the pandemic has seen more than 58,000 deaths from some 1.6 million cases in Britain – the worst in Europe.

The economic consequences also threaten to be dire. Last week, finance minister Rishi Sunak said the economy was set to contract 11.3% this year – the worst in over 300 years.

A 3-month shutdown from late March forced non-essential retailers to close, but even as businesses reopened from June, town and city centers remained virtually deserted.

The government ordered non-essential shops to close again in England on November 5 to try to cut infection rates as cases spiraled across the country. – Rappler.com