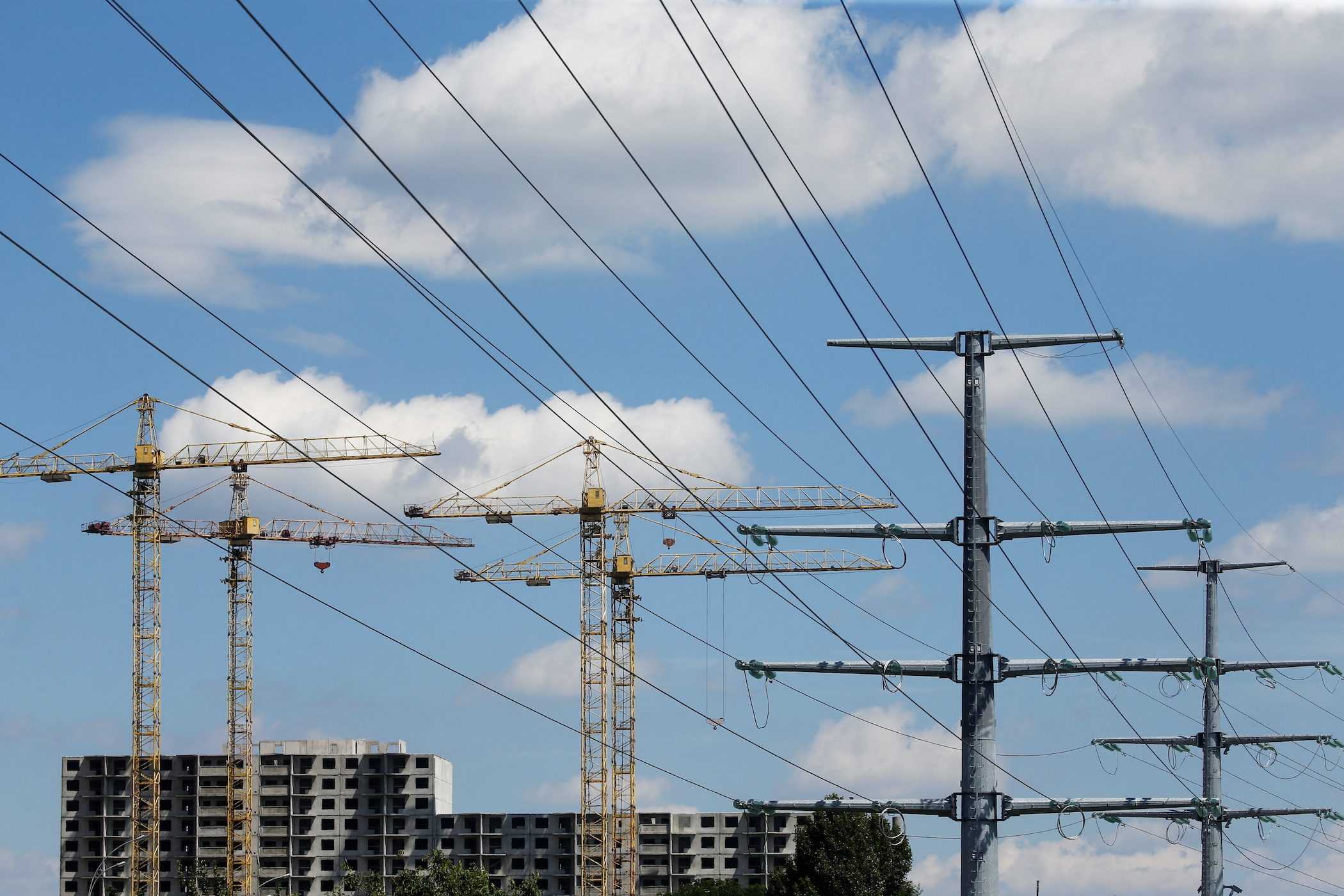 POWER. Building cranes and power lines connecting pylons of high-tension electricity are seen next to a construction site of apartment blocks in Kyiv, Ukraine, July 10, 2020.

Facebook Twitter Copy URL
Copied
Fully launching European Union trade for Ukraine's overall system, however, could take years, even without the challenges posed by the war

Ukraine could increase electricity exports to the European Union and is working to enable power trade with Europe in the future, the country’s top utility and its electricity grid operator said on Thursday, April 14.

The EU and Ukraine linked Europe’s electricity system to Ukraine’s grid on March 16 in response to Russia’s invasion. The move increased the Ukrainian system’s independence from Russia, and means Ukraine can receive emergency power from Europe if military attacks caused power outages.

“I believe that we can convince that our system has proven very stable in synchronization mode…and there are grounds to gradually increase cross-border capacity for commercial operations,” Timchenko said.

The grid link – which was done in weeks, having already been planned for 2023 – was an emergency response and does not include commercial trade. Ukraine’s power consumption has dropped during the war.

A spokesperson for Ukrainian grid operator Ukrenergo said emergency power from Europe had not been needed so far, and it was continuing with technical work that could pave the way for commercial trading with Europe.

“Further opportunities for electricity trade with Europe will be assessed in cooperation with our European partners in the near future,” the spokesperson said, adding that this would have a “significant annual economic effect on both Ukraine and Europe.”

EU energy policy chief Kadri Simson told Reuters the first month of the grid synchronization had been successful and that there was scope to introduce trading in future.

“At the moment, exceptional commercial exchanges are possible with Poland and we are working towards making system level trade with the EU possible in the future,” she said.

Ukraine’s power exports are currently 200 MW via a power link with Poland. Before the war, a small western section of Ukraine’s grid was exporting an extra 650 MW to Slovakia and Hungary, one trader told Reuters.

Fully launching EU trade for Ukraine’s overall system, however, could take years, even without the challenges posed by the war. Poland’s power grid has said it could take until 2026 to relaunch a 1,000-MW power link between Rzeszow in Poland and Khmelnytskyi in Ukraine which was idled in 1992.

A spokesperson for continental Europe’s power system, the European Network of Transmission System Operators for Electricity (ENTSO-E), said the conditions for a full grid synchronization still need to be established.

As part of a planned test, Ukraine decoupled from an electricity system linked to Russia on the day of the Russian invasion – meaning Moscow can no longer control technical aspects of the network, such as grid frequency – and has said it will not reconnect. – Rappler.com