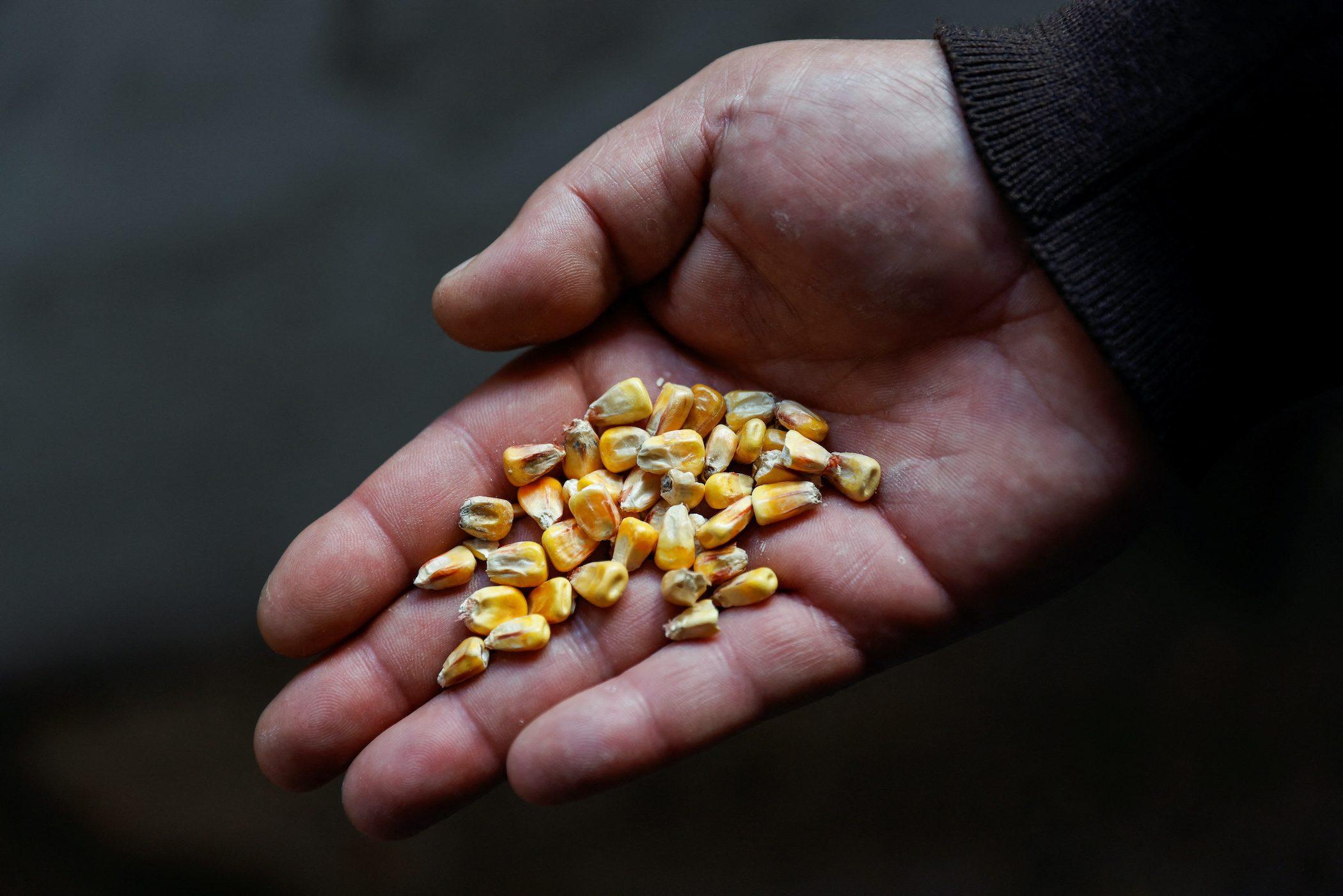 GRAINS. Sergei Yarosh, head of Mlybor (flour mill) enterprise, shows a handful of grains at the facility after it was shelled repeatedly, amid the Russian invasion of Ukraine, in Chernihiv region, Ukraine, May 24, 2022.

LONDON, United Kingdom – Grain silos in Ukraine’s government-controlled territory are about half full in the run-up to this year’s harvest, meaning crops could be left in the ground if Russia continues its port blockade, the head of the Ukraine Grain Association said on Wednesday, June 8.

There are some 30 million tons of grain stored in Ukrainian-held territory out of capacity of around 55 million tons, Mykola Gorbachov told an International Grains Council (IGC) conference in London, adding there were 13 million to 15 million tons of storage capacity in Russian-occupied areas.

Without access to its Black Sea ports, Ukraine would at best be able export 20 million tons of grains next year, Gorbachov said, adding these would likely be more sunflower seeds than corn and wheat.

Ukraine, which shipped 44.7 million tons of grains in 2020-2021, is currently trying to export its crop via road, river, and rail but logistics difficulties limit volumes to a maximum of around 2 million tons a month using these routes.

“I can tell you we won’t find a solution [for] exports [without Black Sea port access],” Gorbachov told the IGC conference.

“The harvest will start in one month. We have enough storage capacity for wheat and barley. The problem will start in November when farmers start to dry corn.”

Gorbachov estimated half of Ukraine’s corn crop would be left in the ground, unharvested, if Russia maintains its blockade of the Black Sea ports. Ukraine is the world’s fourth largest corn exporter and largest sunflower oil exporter.

Gorbachov said the Turkey-Russia talks were not likely to lead to the security guarantees required to ship Ukraine’s grains and instead called on the United States, Britain, and France to provide safe convoy for vessels carrying Ukraine’s crop.

“I don’t believe any company will load [Ukrainian] grain if the Russians sign something with the Turks. Insurance won’t cover this risk. We need international guarantees, only in this case the grain will move,” he said.

Ukraine and the West accuse Moscow of weaponizing food supplies. Moscow blames the situation on what it says are Ukrainian mines in Black Sea waters and on international sanctions against Russia, the world’s largest wheat exporter.

Around 22 million tons of grain were stuck in Ukraine as of early May. As prices surge, United Nations agencies are having to cut food rations for refugees by up to half in poor parts of the world like the Sahel. – Rappler.com