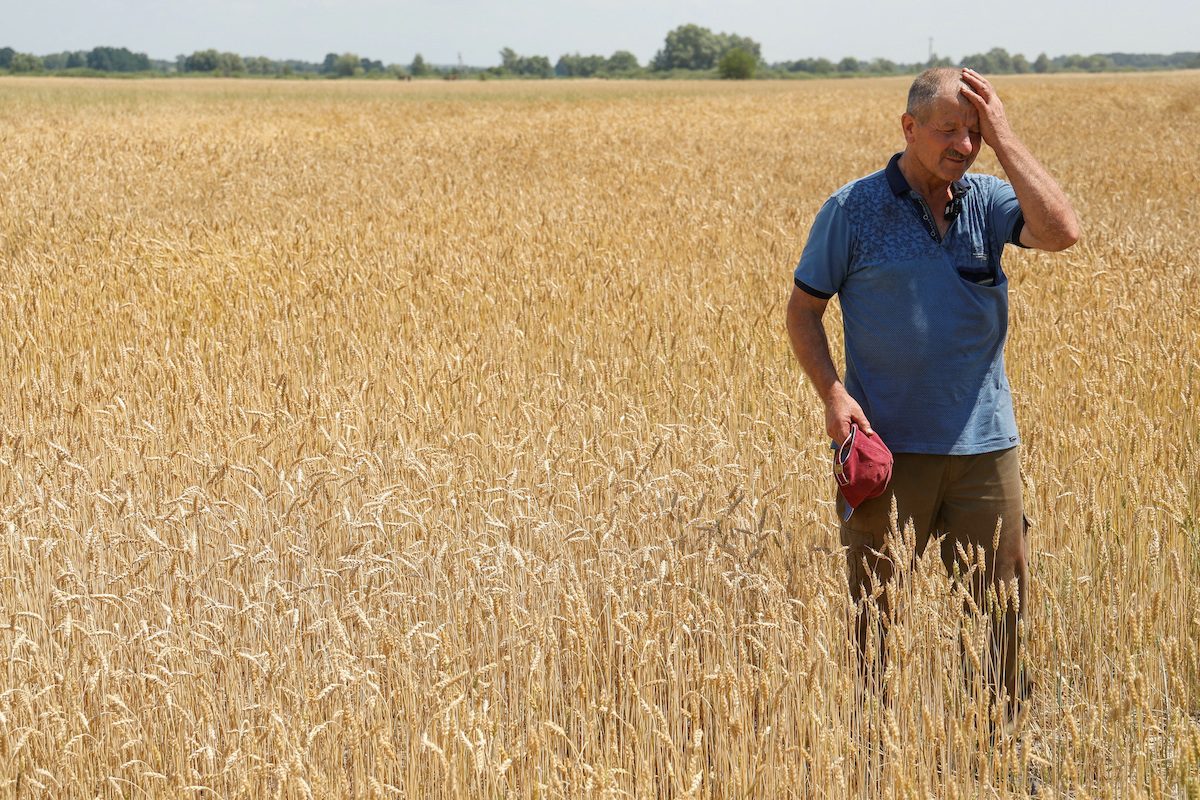 AGRICULTURE. Farmer Mykola Tereshchenko reacts while speaking to Reuters about the harvest, as Russia's attack on Ukraine continues, on a wheat field in the village of Khreshchate, in Chernihiv region, Ukraine, July 5, 2022.

Facebook Twitter Copy URL
Copied
Farmers will have to sell their harvest at a huge loss if they can't store it, leaving less cash to buy seeds, fertilizers, and chemicals for next season and exacerbating expected falls in Ukraine's output

KHRESHCHATE, Ukraine – Ukrainian farmer Mykola Tereshchenko hopes to start harvesting his wheat fields this week, but the smallholder in northern Ukraine has nowhere to store the grain.

His silos are still crammed full with 1,100 metric tons of grain from last year’s harvest that he can’t export due to the closure of Ukraine’s seaports following Russia’s invasion in February.

While some crops have left by rail or road via neighbors such as Romania and Poland, millions of metric tons have piled up on farms and a lack of shipments from one of the world’s biggest grain exporters is pushing up global food prices.

The US Department of Agriculture estimated this month that Ukraine ended the 2021-2022 season in June with 6.8 million metric tons of corn, an eightfold rise from a year earlier, while wheat stocks almost quadrupled to 5.8 million.

United Nations agencies have warned that lack of Ukrainian grain, which typically goes to the Middle East and Africa, is threatening starvation and mass migration on an “unprecedented scale.”

Farmers such as Tereshchenko, in regions where sending grain via rail or road to eastern Europe is problematic, will have to sell their harvest at a huge loss if they can’t store it, leaving less cash to buy seeds, fertilizers, and chemicals for next season and exacerbating expected falls in Ukraine’s output.

Tereshchenko farms as part of a collective of 30 people near Khreshchate, a village of 700 people some 120 kilometers (75 miles) from the Russian border that was shelled and bombed during the first month of the war.

The villagers mostly hid in cellars during strikes that destroyed the roofs of the farm, Tereshchenko said. Thirty cows and pigs were killed.

‘This is a catastrophe’

Once Russia withdrew to focus on capturing a swathe of Ukraine’s east after failing to take the capital Kyiv, sappers combed fields that had been littered with the detritus of war, defusing mines and ordnance. Farmers then went through the fields using tractors to drag rockets out of the soil.

Almost no money has come in to the collective, which has only managed to sell some sunflower seeds at very bad prices.

“We have our own storage. But it’s full with the grain that we haven’t been able to sell,” Tereshchenko told Reuters.

The future of his farming business, and many others in the war-torn country, could now hinge on talks which are expected to continue this week on opening up a sea corridor to allow exports via Ukraine’s Black Sea ports to resume.

He hopes the sea route will reopen but fears what will happen if it doesn’t.

“For me, personally, this would be the death of all my dreams and plans in life. I’m 60, what else is there?” he said.

“For the collective, this is a catastrophe. They’ll be without work, without bread. I’m a pensioner, I can hang in there. But for the people, it will be a catastrophe, just a catastrophe.”

Prices for grain have plunged in Ukraine in recent weeks as farmers try to clear space in their silos for the new harvest.

“The price of all grain has gone down, and the cost of logistics has gone up so much that it just destroys everything – the farmer has no more income,” a foreign grain trader who works in Ukraine said.

At the Baryshivska Grain Company, a medium-sized enterprise in Nizhyn in the northern Chernihiv region, Yevhen Prymushko, the director of the firm’s silo and storage operations, said the plight of smallholder farmers was particularly bad.

He said the company used to be able to offer services to them, but pressure from the export blockade meant it had no spare storage capacity to offer.

Before the war, their silos could hold 72,000 metric tons of grain, but a rocket strike destroyed the roof of one. The bombardment slashed the overall capacity by 15,000 metric tons and destroyed a smaller 1,200-metric-ton storage facility.

“We won’t be able to give services to smallholder farmers. They won’t have anywhere to put their grain. We chat to them, they’re asking for us to store just a little bit,” Prymushko said.

Kees Huizinga, a Dutch national who runs a 15,000-hectare dairy and crop farm about 200 kilometers south of Kyiv, said farmers plan to repurpose workshops and cow barns to store grain harvested this season.

He has also purchased about 60 plastic storage sleeves, known as “ag bags,” for $1,000 each. A bag can store 250 metric tons of grain, giving him the ability to store another 15,000 metric tons.

Oleksandr Haidu, head of the Ukrainian parliament’s agrarian committee, said Ukraine needed about 80,000 such sleeves and that the legislature was planning to create preferential conditions for the sleeves by waiving import duties.

“Unfortunately, some farmers are already selling what they harvest below net cost. Some do not even know whether to harvest at all,” he said.

“If we don’t step up now, and export routes don’t expand, our silos will overflow in October, farmers will sell their crops for next to nothing, will not be able to pay rent, and eventually refuse to sow next year.”

Ukraine was once the third biggest grain exporter in the world but it is gradually slipping down the league tables. That trend is likely to be exacerbated next year if farmers lack the cash to buy seeds and fertilizers, or any incentive to plant crops if they can’t be shipped.

“Farmers cannot cover their costs with the price, and if nothing changes in the near future, then we can expect a decrease in the area of autumn sowing,” said Maria Kolesnyk, an analyst with ProAgro consultancy. – Rappler.com