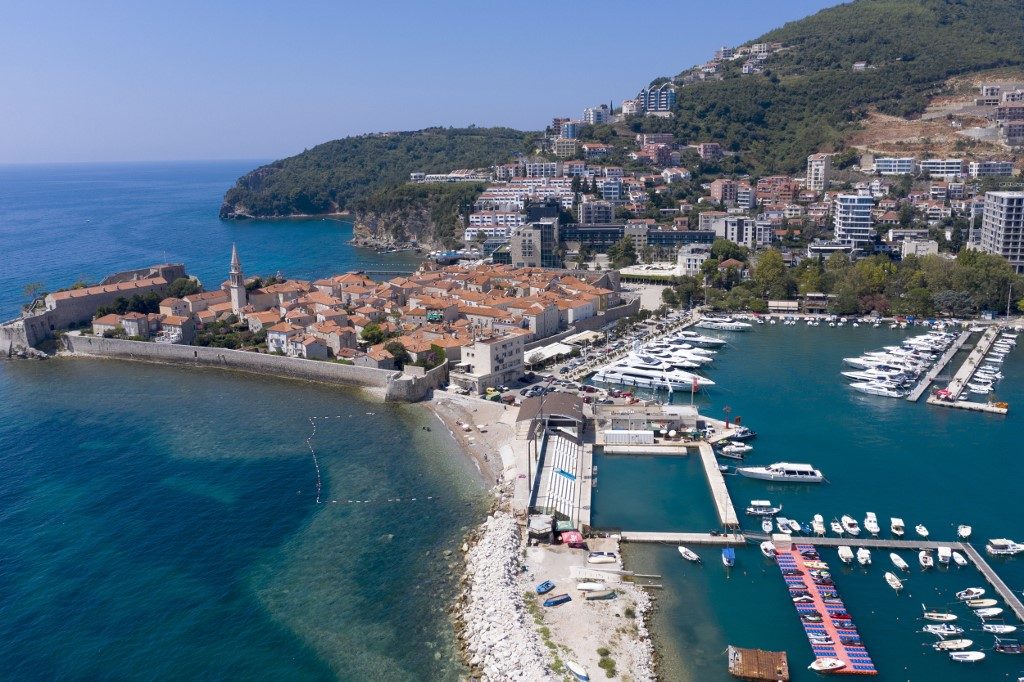 An aerial picture shows a view of the coastal town of Budva, one of the major tourist spots at Montenegro's Adriatic coast, on August 17, 2020. The pandemic-triggered peace is tinged with anxiety about the economic future of a tiny country, which heavily depends on its tourism industry. Tourism contributes to around a quarter of Montenegro's economy in normal times, and employs nearly 20 percent of the workforce. Savo PRELEVIC / AFP

Facebook Twitter Copy URL
Copied
Any joy brought by the pandemic-triggered peace is tinged with anxiety about the economic future of Montenegro, a country with a population of some 620,000

Gliding across Montenegro’s majestic, mountain-ringed Kotor bay, captain Ivan Gvido Krivokapic revels in the unusually tranquil waters of a destination that has become a tourist magnet in recent years.

But any joy brought by the pandemic-triggered peace is tinged with anxiety about the economic future of a tiny country, which heavily depends on its tourism industry.

Boat passengers will “probably never again experience such an empty bay and see all the beauties of our city,” Krivokapic says wistfully on a picture-perfect summer afternoon, framed by the rocky mountain slopes that jut into the Adriatic’s deep blue waters.

Gone are the gargantuan cruise ships that have become a daily feature of Kotor’s port and the tour groups that clog up the charming alleyways of the walled Old Town, steeped in history.

And yet it is hard to feel at ease as fear mounts over the economic fallout of the coronavirus pandemic, which is weighing heavily on the minds of voters ahead of parliamentary elections on Sunday, August 30.

“People are enjoying [the peace] but they are not happy, because the economic moment is crucial,” said Branko Radulovic, who rents out apartments in Kotor.

“We are now in some ways aware of how dependent we are on the summer crowds and chaos,” he said.

Tourism contributes to around a quarter of Montenegro’s economy in normal times, and employs nearly 20% of the workforce.

Economists say the pandemic has exposed the dangers of “putting all your eggs in one basket,” revealing an urgent need to diversify an economy that otherwise rests on agriculture – which accounts for 50% of gross domestic product – services and a small industrial sector.

This summer, tourist arrivals and spending have plummeted around 90% compared to last year, according to official data.

That is a bigger-than-expected drop and will likely send shock waves across the economy.

According to the International Monetary Fund’s latest forecasts, Montenegro is on course for its largest contraction – nearly 9% – since its 2006 independence.

The governing Democratic Party of Socialists (DPS), which has been in power for 3 decades, hopes the uncertain future will sway voters to play it safe and stick with what they know in Sunday’s polls.

“Citizens could vote more out of fear and out of the need to preserve the status quo, so as not to lose their jobs, or any other income,” said analyst Zoran Radulovic, editor of weekly news magazine Monitor.

But the opposition is trying to capitalize on the concern, with critics lambasting the government for its handling of the crisis so far.

The current pessimism is a bleak turnaround from just a few months ago, when Montenegro gleefully declared itself the first country in Europe to be coronavirus-free after a period of no new infections for several weeks.

Infections then started to mount in July and have now reached a total of more than 4,300 cases and 80 deaths in the population of some 620,000.

Desperate to salvage the travel industry, the government recently opened borders to top markets – including Serbia and Russia – which had been shut due to their high virus numbers.

Tourism operators are desperate for any help they can get.

“It’s wonderful that there are no traffic jams and that I quickly travel about 20 kilometers (12 miles) from home to work, but the price is too high,” said the owner of a local travel agency in the coastal town of Budva, Danica Kazanegra Gregovic.

In the coastal city of Tivat, only two planes are arriving daily – compared to last summer’s average of 50 planes and 9,000 passengers a day.

Locals say they can’t remember such a quiet season, even during a devastating 1979 earthquake, or the 1990s wars in former Yugoslavia.

“This is currently at the level of a catastrophe,” says Dejan Radjenovic, who works for his family’s restaurant in Budva.

Stefan Petrovic, a 29-year-old who manages a restaurant in Kotor, says young people are already struggling with high unemployment, at more than 18%, and low wages averaging just over 500 euros a month.

“For us young people, who want to work and make money, this has not been pleasant,” he told Agence France-Presse.

“This is too much of a vacation for us.” – Rappler.com