Unemployment down to 7.1% in March 2021 but quality of jobs still in question 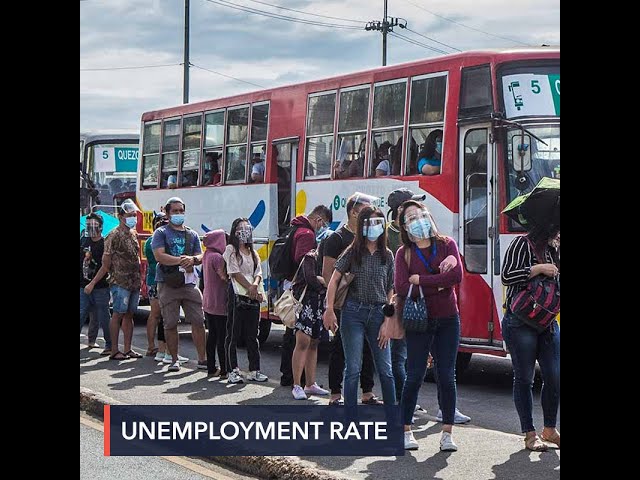 The Philippines generated more jobs in March 2021 as lockdown restrictions eased during the period. The quality of jobs available, however, remains in question.

The unemployment rate went down to 7.1% in March 2021, translating into some 3.44 million Filipinos with no jobs, the Philippine Statistics Authority (PSA) said on Thursday, May 6.

The latest unemployment figure in the labor force survey is lower than the 8.8% recorded in February 2021, which was equivalent to 4.2 million Filipinos.

It is also the lowest unemployment rate since April 2020’s 17.7%, the highest ever on record.

Meanwhile, the underemployment rate or the percentage of the working population looking for more hours of work stood at 16.2%, equivalent to 7.34 million individuals. This is lower than the 18.2% or 7.9 million people recorded in February 2021.

There were 45.33 million Filipinos with work during the period, translating into an employment rate of 92.9%. This is higher than the 91.2% recorded in February, which was equivalent to 43.2 million employed persons.

National Statistician Dennis Mapa noted that the survey was conducted before enhanced community quarantine (ECQ), the strictest form of lockdown, was reimposed in “NCR Plus” or the National Capital Region, Bulacan, Rizal, Laguna, and Cavite for a period beginning March 29.

While unemployment was down, Mapa said the labor force participation rate is at its highest since 2014, indicating that more people are looking for work amid the worst economic and health crisis in recent history.

Mapa noted that there were more young Filipinos aged 15 to 24 who were in the labor force. There were also more senior citizens or people aged 65 and above that were either employed or were looking for work in March.

Mapa also reported that there were more people classified under “elementary occupations,” or those who sell goods in the streets and public spaces, as well as those who are in janitorial services.

Elementary occupations rose to 1.08 million in March, while service and other sales workers reached 551,000. Craft and other related trade workers also went up to 308,000.

In a joint statement, the government’s economic team welcomed the latest figures, noting that some 2.2 million jobs were generated between February and March.

“With the recovery of the economy after the ECQ was relaxed in mid-2020, 11.5 million jobs have been generated as of March 2021, more than offsetting the 8.7 million jobs that were lost in the period March to May 2020. This translates to a net job creation of 2.8 million jobs,” the statement read.

The economic managers acknowledged that the reimposition of the strict lockdown will cause unemployment to rise.

But they added that “the impact is expected to be less severe compared to April 2020 given our more risk-managed approach to the present quarantines.”

The Asian Development Bank earlier said that spikes in COVID-19 cases, which result in lockdowns, further scar the labor market.

The multilateral lender also warned that the Philippines risks experiencing hysteresis, where the unemployment rate continues to rise even after the economy has started to grow again. – Rappler.com