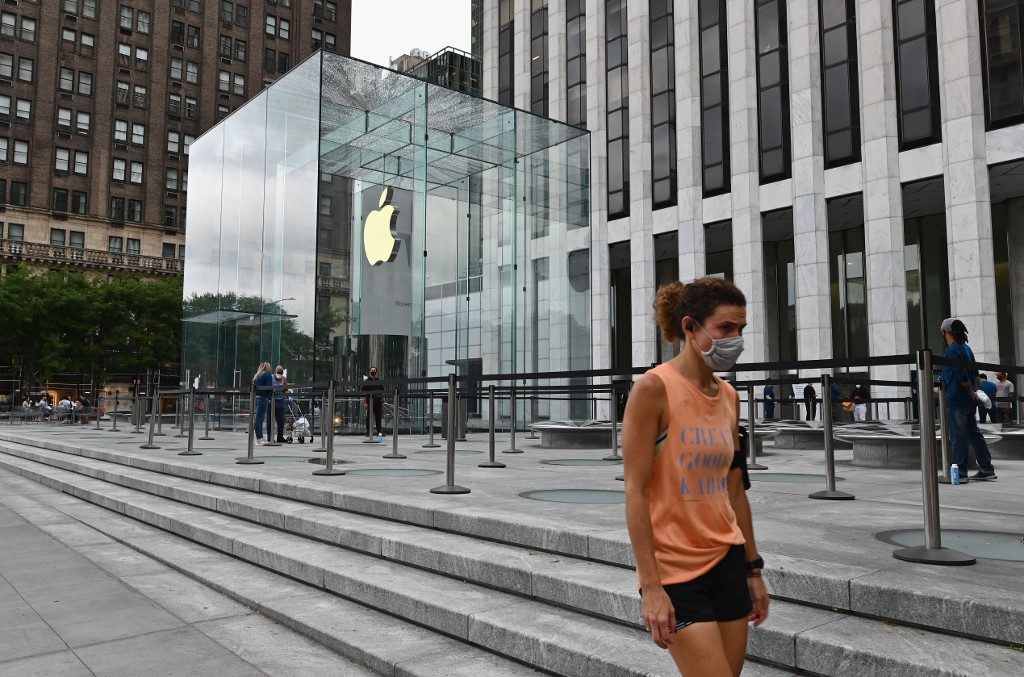 A person walks past the Apple store on Fifth Avenue in New York City on September 28, 2020. (Photo by Angela Weiss / AFP)

“Federal economic recovery payments slowed, as pandemic-related assistance programs continued to wind down,” the report said, but income gain was boosted by private wages and rents.

The data was already incorporated into the 3rd quarter gross domestic product report released on Thursday, October 29, which showed a 33.1% jump in growth, but the monthly report reveals spending held up in the most recent weeks.

However, economists have raised questions about whether that can be sustained without additional government aid, especially as COVID-19 infections are surging.

“Household spending provided a strong boost to growth in Q3. However, the outlook is less certain given rising virus cases that will restrict activity, close businesses, and result in job losses,” Rubeela Farooqi, chief economist at High Frequency Economics, said in an analysis.

And she warned that “savings, which provided a cushion to households, will diminish further in the absence of fiscal support. That will weigh on incomes and spending going forward.”

Policymakers in Washington have not been able to break the impasse over a new relief package to succeed the $2.2-trillion CARES Act that Congress approved in late March which is credited with preventing an even worse economic collapse.

The extra $600 weekly unemployment benefits under the CARES Act expired at the end of July, but a few pandemic programs remain in place.

The $159.2-billion increase in personal spending in September was driven by purchases of clothing and footwear as well as autos, the report said.

A smaller share of the increase was on services, where the largest contributors were health care and fitness clubs, among others.

The PCE price index, both overall and excluding food and energy, rose a modest 0.2%. The headline index was up 1.4% for the full year, meaning inflation remains tame. – Rappler.com