The US economy under Trump: By the numbers 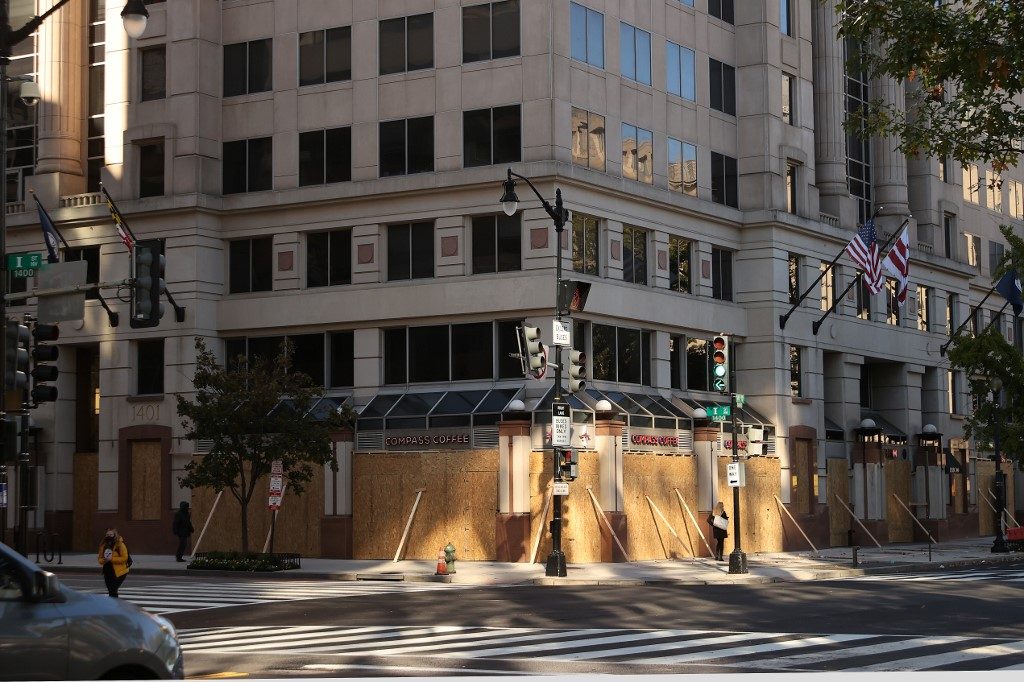 Retail businesses and office buildings are boarded up in anticipation of Election Day vandalism near the center of Washington, DC, on November 2, 2020. Extra layers of fencing have been in place for several months around the White House after the violence that followed George Floyd's murder by police in Minneapolis earlier this year. Chip Somodevilla/Getty Images/AFP

Facebook Twitter Copy URL
Copied
United States growth was relatively robust prior to COVID-19, but the turmoil of the coronavirus upends normal trends

Prior to the coronavirus, the United States economy was on strong footing, propelled by low unemployment, bargain basement borrowing rates, and healthy consumer spending.

Given this backdrop at the start of 2020, US President Donald Trump seemed headed towards a second term in the White House.

But the US economy has suffered a brutal blow from COVID-19, forcing businesses nationwide to close their doors, and the damage is apparent in leading economic benchmarks.

Trump inherited an economy with already-low unemployment of 4.7% when he took office in January 2017, less than half the peak hit in the aftermath of the 2008 global financial crisis.

The Trump economy continued to improve following the gains made during the 8-year presidency of Barack Obama. Unemployment hit a 50-year low of 3.5% in September 2019.

But conditions deteriorated sharply once the coronavirus shuttered much of the US economy in March, and unemployment jumped to 14.7% in April.

The jobs picture has improved as businesses reopened, falling to 7.9% in September, although hiring has begun to slow in recent months.

US growth was relatively robust prior to COVID-19.

Growth topped 2% in each of the Trump’s first 3 years, dipping in 2019 to 2.3% from 2.9% a year earlier. That was still higher than gross domestic product (GDP) in other large economies.

But the turmoil of the coronavirus has upended normal trends, with the US experiencing an historic drop in growth in the 2nd quarter, followed by an unprecedented bounce in the 3rd quarter.

Even with the improvement in the most recent quarter, US GDP in the 3rd quarter still lagged the year-ago level by 2.9%, according to US data.

A centerpiece of Trump’s presidency was the US tax cut package enacted in late 2017, which trimmed the tax rate on corporate profits to 21% from 35%, and lowered taxes for the wealthiest individuals.

The tax overhaul, the biggest change in 30 years, helped boost economic growth in 2018, but also ballooned the deficit, which surged to more than $1 trillion in 2019.

The turmoil from the coronavirus and resulting outlay of massive new federal spending has further exploded the country’s deficit above $3 trillion, a new record by a wide margin.

Facing an unprecedented slowdown due to the coronavirus, Republicans and Democrats came together in March to enact a $2.2-trillion economic support package.

The measure included stimulus checks of up to $1,200 for every American, extra unemployment payments of $600 a week, and forgivable loans for small businesses battered by the coronavirus to help them pay their employees.

But key elements of the CARES Act have expired and policymakers in Washington failed to agree on a new package of support, putting the economy on vulnerable footing as coronavirus cases hit new peaks.

Trump has frequently criticized the US Federal Reserve and Chair Jerome Powell, whom Trump appointed.

Trump blasted Powell over the decision to raise interest rates in 2018, saying the move weighed down the US economy.

But the Fed has taken aggressive action in the wake of the coronavirus, slashing the benchmark lending rate to between zero on March 16.