US trade deficit narrows in April 2021 as imports fall 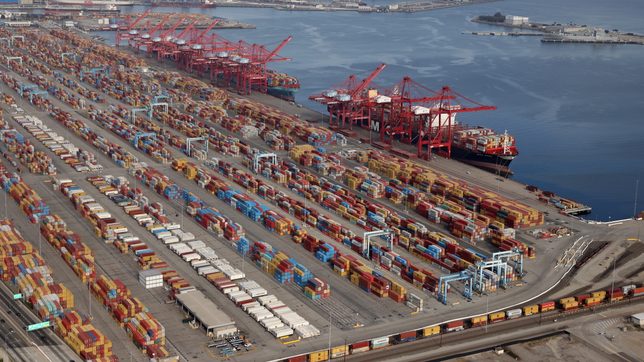 TRADE DEFICIT. Shipping containers are unloaded from ships at a container terminal at the Port of Long Beach-Port of Los Angeles complex in California, April 7, 2021.

The US trade deficit retreated from a record high in April amid a decline in imports, suggesting domestic demand was starting to revert back to services from goods.

With at least half of the American population fully vaccinated against COVID-19, authorities across the country are lifting virus-related restrictions on businesses, boosting demand for services like travel. Demand shifted towards goods, with Americans cooped up at home, at the height of the pandemic.

“Consumers splurged on goods during the stay-at-home economy’s boom in 2020 and early 2021, since pandemic restrictions reduced spending on meals out, vacations, and other services,” said Bill Adams, a senior economist at PNC Financial in Pittsburgh, Pennsylvania.

“With the pandemic coming under control, consumers are redirecting their spending towards domestically produced services and away from imports.”

The trade deficit dropped 8.2% to $68.9 billion in April, the Commerce Department said on Tuesday, June 8. Data for March was revised higher to show the gap widening to a record $75 billion instead of $74.4 billion as previously reported.

Economists polled by Reuters had forecast a $69-billion trade deficit in April.

Still, the trade deficit was likely to remain elevated as economic activity in the United States rebounds faster than its global rivals, also thanks to massive fiscal stimulus. Robust demand as the economy reopens is straining supply chains.

“We see no change in the prevailing trend of trade where the stronger US economy is sucking in more goods demanded by consumers and businesses, while America’s trading partners are finding it harder to restart their economic growth following the pandemic,” said Chris Rupkey, chief economist at FWDBONDS in New York.

The decline was led by a $2.6-billion drop in imports of consumer goods, which reflected decreases in textile apparel, toys, games, and sporting goods as well as household appliances. Imports of motor vehicles, parts, and engines also fell. But imports of cell phones and other household goods increased.

Imports of foods, feeds, and beverages were the highest on record as were of those of capital goods. Imports of services increased $0.7 billion to $41.9 billion in April. They were lifted by travel and transport services.

US stocks were little changed. The dollar rose versus a basket of currencies. US Treasury prices were higher.

They were led by a $2.1-billion increase in shipments of capital goods, which reflected gains in civilian aircraft. Exports of industrial supplies and materials, which were the highest on record, increased $0.8 billion, with crude oil shipments rising $1 billion.

But exports of motor vehicles, parts, and engines fell.

Exports of foods, feeds, and beverages were the highest on record. The pandemic remained a drag on trade services, especially travel. Exports of services increased $0.7 billion amid small gains in travel, transport, and charges for the use of intellectual property.

At $17.8 billion in April, the services surplus was the smallest since August 2012.

Exports are likely to continue rising as global economic growth gains momentum. The resumption of international travel and in-person learning at US universities in the fall is likely to result in an improvement in services trade.

When adjusted for inflation, the goods trade deficit decreased $7.2 billion to $98.6 billion in April.

“That suggests that net trade will provide a negligible boost to GDP (gross domestic product) growth, but that would represent a big improvement from the sizeable drag in recent quarters,” said Michael Pearce, a senior US economist at Capital Economics in New York.

Trade was a drag on GDP growth in the first quarter. Most economists expect double-digit GDP growth this quarter, which would position the economy to achieve growth of at least 7% in 2021, which would be the fastest since 1984.