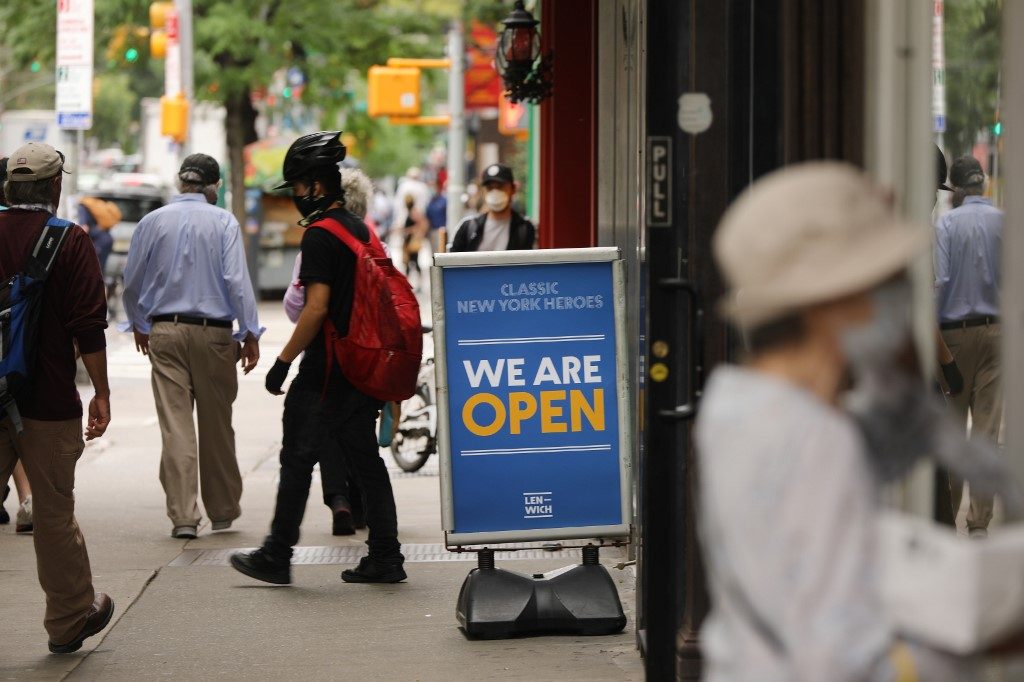 ECONOMIC MOMENTUM. In this file photo taken on June 18, 2020, people walk through Manhattan as the city prepares to enter stage 2 of reopening in New York City.

The Dow has hit a record high and parts of the United States economy are growing, but analysts and government data warn of a worsening employment and spending situation in the final months before President-elect Joe Biden takes office.

The data’s release came one day after the Dow Jones Industrial Average crossed the symbolic 30,000-point high for the first time, a record President Donald Trump called “sacred” and touted as a product of his administration’s efforts to advance coronavirus vaccines. (READ: 5 things to know about the iconic Dow stock index)

Other data released on Wednesday were comparatively positive, showing new home sales remaining strong in October and durable goods orders performing better than expected due to rising demand for defense aircraft and parts.

With Trump in his final weeks in office before Biden takes over following a contentious election, analysts warn that whatever economic momentum the economy has may have petered out by the time the president-elect enters the White House. (READ: How will Joe Biden change life for US businesses?)

“We are expecting a small positive but the stage is set for 1st quarter contraction given the absence of additional fiscal stimulus and threat of untenable surge in cases and hospitalizations,” Diane Swonk of Grant Thornton said on Twitter.

The rise in seasonally adjusted weekly jobless claims to 778,000, as reported by the Labor Department in the week ended November 21, was the second consecutive weekly increase, and came as another 311,675 people, not seasonally adjusted, filed under a program for workers not normally eligible.

The United States has not seen two back-to-back weeks of rising claims since July. And the level still remains above the worst single week of the 2008-2010 global financial crisis, indicating the enduring power of the world’s largest COVID-19 outbreak to disrupt business.

Consumers and businesses had been buoyed by the $2.2-trillion CARES Act passed earlier this year. It expanded unemployment payments and offered loans and grants to small businesses.

But much of those programs expired in recent months, and Democrats and Republicans in Washington have been deadlocked on passing another stimulus measure to aid the recovery.

Personal consumption expenditures slowed, growing just 0.5%, though that was slightly better than analysts’ forecast, and the savings rate fell a full point to 13.6%.

Rubeela Farooqi of High Frequency Economics warned of a further collapse in both income and savings as the year draws to a close, when programs assisting the long-term unemployed and gig workers expire.

“The outlook is dimming as the lift from fiscal support to incomes and savings fades further at year end, when federal unemployment insurance programs expire,” she wrote in an analysis.

However, homebuyers have managed to stay in the market amid the downturn, pushing real estate sales and construction up thanks to the Federal Reserve’s slashing of its key lending rate to zero as the pandemic began.

The Commerce Department reported that trend continuing in October, with new home sales at a seasonally adjusted annualized rate of 999,000, slightly less than in September but way above the previous year.

Durable goods came in above expectations last month, Commerce said, with orders for big-ticket items such as industrial equipment and automobiles up 1.3% to $240.8 billion, fueled by a 79.1% jump in orders for defense aircraft and parts.

Amid the spending deadlock in Washington, policymakers may indeed be betting on the approval of one of several vaccine candidates to turn business conditions around, but Gregory Daco of Oxford Economics warned the economy was in for some tough times before that happens.

“What the economy needs is a heavy dose of realism to go along with a splash of vaccine optimism,” he said.

“While the 2021 spring and summer will no doubt be brighter once the US reaches herd immunity via a broad-based diffusion of a COVID-19 vaccine, the economic situation today is distressing.” – Rappler.com