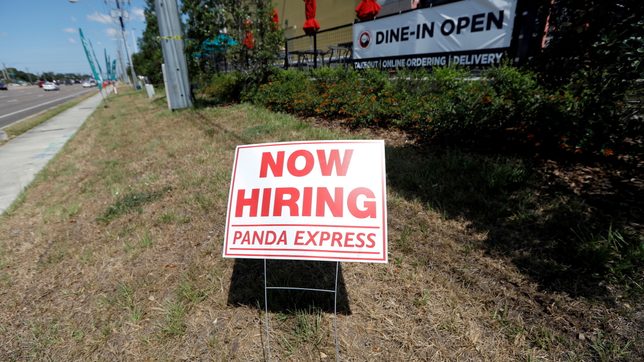 Facebook Twitter Copy URL
Copied
Improving US labor market conditions provide ammunition for the Federal Reserve, which signaled it could begin reducing its monthly bond buying as soon as November

The number of Americans filing new claims for jobless benefits dropped by the most in three months last week, suggesting the labor market recovery was regaining momentum after a recent slowdown, as the wave of COVID-19 infections began to subside.

The weekly unemployment claims report from the Labor Department on Thursday, October 7, the most timely data on the economy’s health, also showed the number of people on state unemployment rolls plunging to an 18-month low in late September.

Improving labor market conditions bode well for the government’s closely watched employment report for September and also provide ammunition for the Federal Reserve, which signaled last month it could begin reducing its monthly bond buying as soon as November.

“The labor market is back on track after a few weeks of rising claims threw a question mark into the markets’ understanding of just how solid the economic outlook really is,” said Christopher Rupkey, chief economist at FWDBONDS in New York. “The Fed has the evidence it needs to start paring back its emergency stimulus purchases when it meets next month.”

Initial claims for state unemployment benefits decreased 38,000 to a seasonally adjusted 326,000 for the week ended October 2. That was the biggest drop since late June. Economists polled by Reuters had forecast 348,000 claims for the latest week.

Unadjusted claims, which economists say offer a better read of the labor market, tumbled 41,431 to 258,909 last week. California led the drop in claims last week. There were also decreases in Michigan, Ohio, Washington DC, and Missouri. They offset notable increases in Pennsylvania and Virginia.

Claims had increased for three straight weeks as California moved people to another program following the expiration of federal government-funded aid on September 6, to allow the recipients to collect one additional week of benefits.

There had also been increases in filings related to the idling of assembly plants in some states by automakers as they managed their supply of semiconductors amid a global shortage.

A resurgence in COVID-19 infections, driven by the Delta variant, also disrupted activity in the high-contact services sector. That suggested some moderation in labor market conditions in the prior weeks, which was confirmed by a separate report on Thursday from global outplacement firm Challenger, Gray & Christmas showing job cuts announced by US-based employers increased 14% to 17,895 in September.

In the third quarter, employers announced 52,560 job cuts, the fewest since the second quarter of 1997 and down 23% from the July-September period.

Stocks on Wall Street were trading higher. The dollar dipped against a basket of currencies. US Treasury prices fell.

Layoffs last month were led by companies in the healthcare/products sector, with 2,673 announced cuts. Since the Pfizer vaccine received full-FDA approval, many healthcare facilities have implemented vaccine mandates, which have led to the firing of non-compliant workers.

Ongoing strains in the supply chain saw industrial goods manufacturers laying off 2,328 workers in September, while warehousing businesses reported 1,936 job cuts. There were 1,679 job cuts in the services sector.

But the rise in layoffs was dwarfed by an explosion in planned hiring, in part as retailers gear up for the holiday season. The Challenger report showed companies announced plans to hire 939,790 workers compared to only 94,004 in August.

With companies eager to hire, more people are coming off the state unemployment rolls. The claims report showed the number of people continuing to receive benefits after an initial week of aid tumbled 97,000 to 2.714 million in the week ended September 25. That was the lowest level since mid-March 2020.

The total number of people collecting unemployment checks under all programs dropped to 4.172 million during the week ended September 18 from 5.027 million in the prior week. That reflected the end of extended benefits last month, which economists hope will increase the labor pool.

The pandemic forced some people to drop out of work to become caregivers. Others are reluctant to return for fear of contracting the coronavirus, while some have either retired or are seeking career changes. That has left employers desperate to fill a record 10.9 million job openings as of the end of July.

The worker shortages have impacted job growth, though there is optimism that hiring picked up in September. According to a Reuters survey of economists, nonfarm payrolls likely increased by 500,000 jobs last month.

Estimates range from as high as 700,000 jobs to as low as 250,000, reflecting the mixed labor market indicators in September. A survey from the Conference Board last week showed consumers’ views of current labor market conditions softened.

While the Institute for Supply Management’s measure of manufacturing employment rebounded last month after contracting in August, its measure of services industry employment slipped.

The economy created 235,000 jobs in August, the fewest in seven months. The unemployment rate is forecast dipping to 5.1% in September from 5.2% in August.