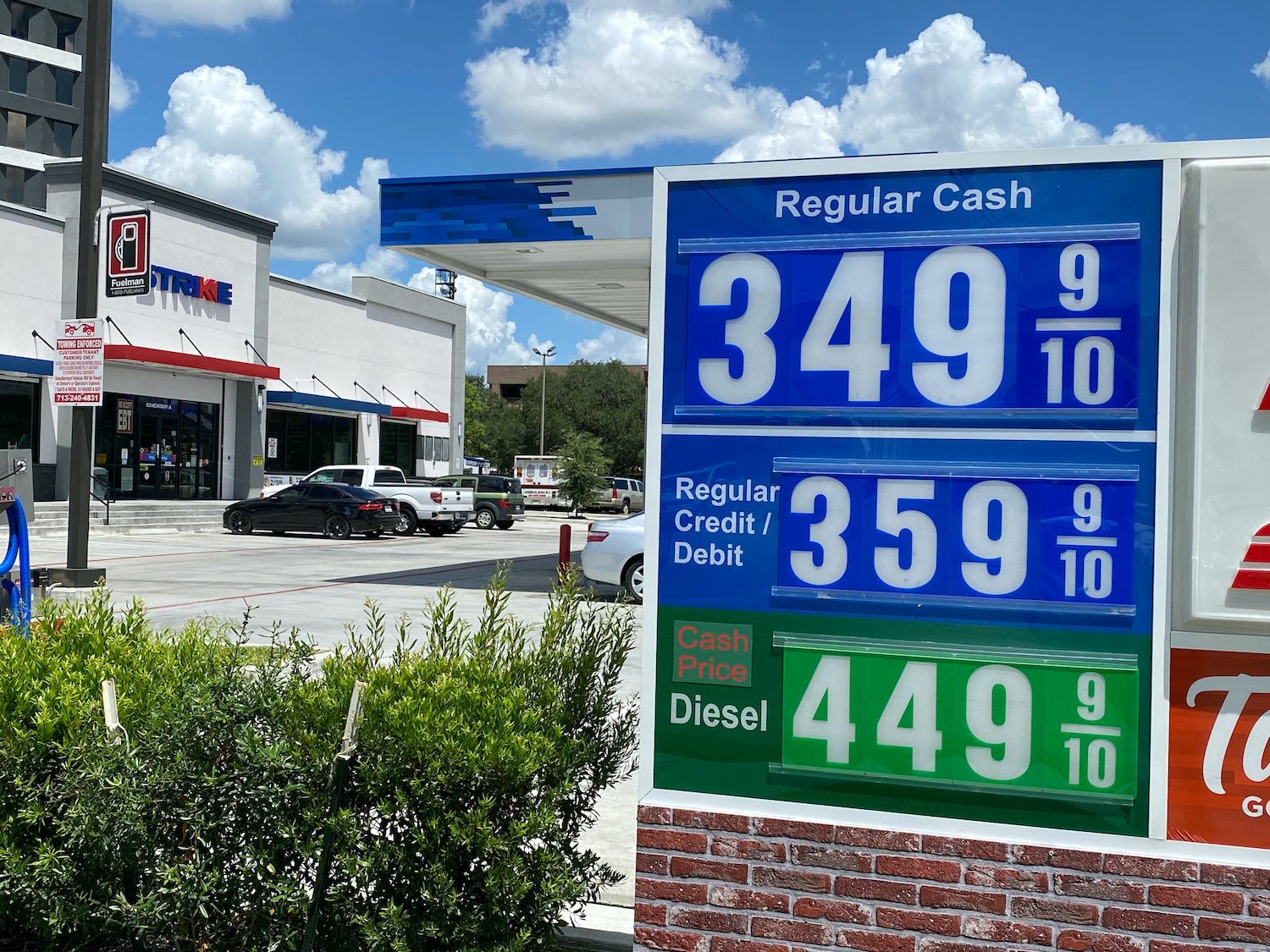 FUEL. A service station advertises the price of regular unleaded gasoline at approximately $3.50 a gallon in Houston, Texas, August 9, 2022.

The average price of US retail gasoline fell below $4 per gallon on Thursday, August 11, for the first time in months, giving some relief to drivers in the world’s largest consumer of the fuel.

The national average price for regular unleaded gas fell to $3.990 a gallon on Thursday, according to the American Automobile Association.

Gasoline prices peaked at a record $5.02 in June. That high cost curbed spending, and prices have also dropped as market fears of severe restrictions on supply have ebbed since Russia first invaded Ukraine in February.

Gasoline prices tend to peak in the summer. They usually drop as summer driving season ends around Labor Day but that is not until September 5.

The latest price drop may help President Joe Biden’s administration and Democrats in Congress as midterm elections approach. The White House has taken several steps to curb oil prices in the wake of Moscow’s invasion of Ukraine.

“More work remains, but prices are coming down, and the president will continue to call on domestic and international oil producers to increase output so that they can continue to come down,” said White House spokesperson Karine Jean-Pierre earlier this week.

The White House is in the midst of releasing more than 180 million barrels of crude oil from the US Strategic Petroleum Reserve (SPR). US oil output has risen by about 500,000 barrels per day this year to 12.2 million bpd.

Gasoline futures are down 27.3% from June highs, while US crude oil has fallen 25%. The retail decline is more than 20%, but some states have seen more relief, such as Ohio, where prices are down 27% from the peak.

The SPR release, in coordination with releases from members of the International Energy Agency, lowered the price of gasoline by 17 cents to 42 cents per gallon, according to a July US Treasury Department analysis, though it said the true impact was hard to ascertain.

The fall in prices has helped low-income Americans, according to Bank of America. Average gasoline spending as a share of total card spending per household fell to 9.3% in July for lower-income households, down from a peak of nearly 10% in June, the bank said.

Inflation expectations are also falling, with US consumer expectations for inflation in a year and three years falling sharply last month.

Inflation was flat in July, driven lower by a sharp fall in energy costs, but consumer inflation is still up 8.5% from a year ago, which is still affecting American spending habits.

“I’m only at half a tank, but I wanted to fill up now while the prices are good,” said Kelly Ferrel, a saleswoman in Atlanta who was filling up on Wednesday for $3.45 a gallon. “I really wish they’d come down more.”

Overall gasoline product supplied, a proxy for demand, is down 6.3% over the last four weeks when compared with a year ago, according to Energy Information Administration data.

With job growth still strong, demand could rebound in coming months with prices at lower levels. Refining executives on earnings calls in the last week were optimistic about consumption for the rest of 2022.

Analysts at Goldman Sachs, however, say crude could rise later this year, because the previous surge “did not result in enough demand destruction to end the current, unsustainable deficit.”

Refiners are expected to prioritize heating oil processing in coming months, cutting gasoline output, which could squeeze that market. US gasoline inventories are at 220 million barrels, lower than any point in the past five years. – Rappler.com