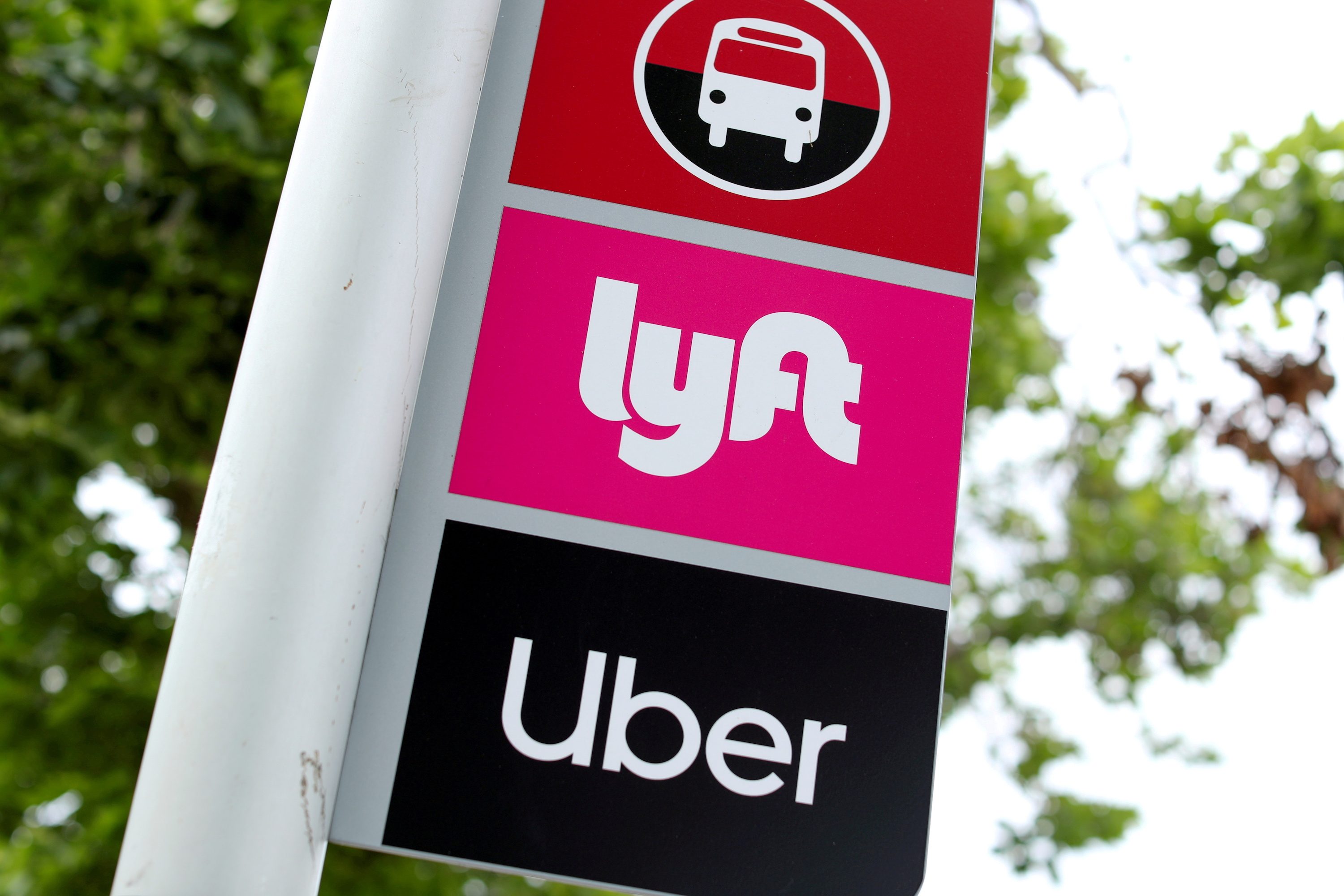 RIDE-SHARING APPS. A sign marks a rendezvous location for Lyft and Uber users at San Diego State University in San Diego, California, May 13, 2020.

Facebook Twitter Copy URL
Copied
Millions of contractors and out-of-work people in the United States will be without an extra lifeline when expanded unemployment benefits expire on Monday, September 6

Ride-sharing driver Meheru Lambero has slowly been recovering from COVID-19 since he tested positive about a month ago, but fears that he will end up sleeping on the streets after US federal pandemic unemployment benefits end on Monday, September 6.

Lambero said he has been relying on the Pandemic Unemployment Assistance (PUA) program, introduced in March 2020 for self-employed workers, business owners, and gig workers who did not qualify for regular benefits.

“I don’t know what I’m going to do…maybe I’m going to be homeless,” said Lambero, who lives in the northwest city of Seattle and sends money back to his family in Ethiopia.

“I don’t have any plan, I’m still wishing our government would do something,” he told the Thomson Reuters Foundation by phone, in between coughs.

Millions of contractors and out-of-work people in the United States will be without an extra lifeline when the expanded unemployment benefits expire on Monday, just as coronavirus cases, hospitalizations, and deaths are surging once again.

Close to 160,000 new infections are being reported each day in the United States – the highest sustained totals in months – in the country which has been hardest hit globally, with 39 million infections and 640,000 deaths since the pandemic began.

More than 7 million people will be hit by Monday’s expiry of three federal programs to help jobless Americans during the pandemic, which also supplemented state benefits with a $300-per-week boost and gave extra money to the long-term unemployed.

The majority of these – 4.2 million – are PUA beneficiaries, according to an analysis by The Century Foundation think tank, typically workers like drivers who are classified as independent contractors and do not receive regular employee benefits.

The rise of the gig economy in the United States and across the globe has become a flashpoint for the labor movement and triggered legal challenges over pay and protections which could reshape the booming on-demand industries.

Anwaar Malik, an Uber driver from New York State’s Long Island, said he would have to return to work when the federal benefits end so as to pay his rent and support his wife and child, as well as family back in Pakistan.

“Who’s going to take care of them if I get killed by COVID?” he asked, adding that he knew other drivers who died from the virus because they had to keep working amid delays in receiving unemployment benefits.

The ride-hailing firms Uber and Lyft declined to respond directly to questions as to whether they supported a benefits extension.

“We are grateful to Congress for stepping up to provide crucial support to gig workers when they needed it most,” an Uber spokesperson said in emailed comments.

In early 2020, Uber and Lyft announced policies to provide financial assistance to drivers who tested positive for COVID-19 or who had to self-isolate because of a suspected positive case.

Uber said it also took steps to confirm that both drivers and passengers wear masks, and Lyft said its drivers could decline rides for health safety reasons with no penalty.

“We anticipate more drivers returning after the end of enhanced federal unemployment benefits,” Lyft said in an emailed statement, which noted that most of its drivers were either students or also had other jobs.

“It continues to be a great time to earn, with drivers in some of our busiest markets making on average more than $35 an hour.”

Half of US states, nearly all led by Republican governors, ended some of the unemployment benefits starting in June, saying the payments were discouraging people from looking for work and leaving companies without the workers they needed to reopen.

Kelly Harris of Ohio, who spoke by phone while on a food delivery job, said the federal benefits, which were cut off in her state in June, had helped her get through the past year.

“It’s harder because I can only work so many hours if I don’t have anybody to watch my kids,” Harris said.

Economists at four universities, including Columbia and Harvard, found that states that withdrew from federal programs in June saw slightly higher job growth, but only one in eight people who lost benefits had jobs in the first week in August.

Courts in several states, including Indiana and Maryland, have ordered the benefits to continue flowing amid legal challenges.

Ending the expanded benefits makes sense given the record number of job vacancies in the country, said Doug Holtz-Eakin, a former director of the federal Congressional Budget Office, which estimates costs of proposed legislation for Congress.

“Anything that appears to be an impediment to having the labor market work more effectively probably should be gotten rid of – and this is on that list,” said Holtz-Eakin, head of the American Action Forum, a conservative think tank.

Tina Raveneau, an organizer with the Independent Drivers Guild, which advocates for ride-share drivers, said that people were “praying” for an extension of the benefits.

“We ride to eat,” Raveneau said. “We are not being heard.”

Raveneau and other advocates have been pushing for a broader rethink of the gig economy, saying the pandemic has highlighted the need for more specific labor and safety protections for ride-hail drivers.

“This working force is not going anywhere…. We want to be in the conversation,” she said.