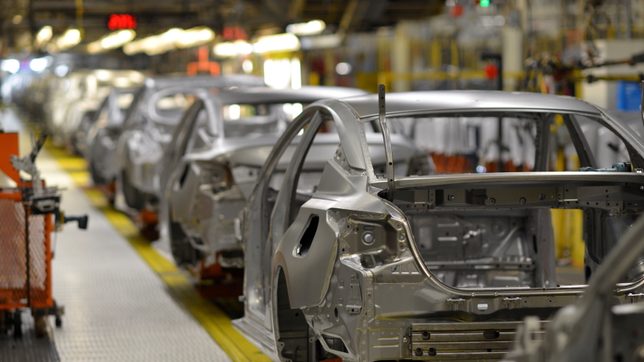 The Institute for Supply Management (ISM) survey on Monday, November 1, also hinted at some moderation in demand amid surging prices, with a measure of new orders dropping to a 16-month low. Still, demand remains strong as retail inventories continue to be depressed, which should keep manufacturing humming.

According to the ISM, “companies and suppliers continue to deal with an unprecedented number of hurdles to meet increasing demand.” The government reported last week that the economy grew at its slowest pace in more than a year in the third quarter because of widespread shortages tied to the COVID-19 pandemic.

“Stress in US supply chains isn’t abating, lending downside risk to our forecast for GDP (gross domestic product) growth in the near term and a clear upside risk to the forecast for inflation,” said Ryan Sweet, a senior economist at Moody’s Analytics in West Chester, Pennsylvania.

The ISM’s index of national factory activity slipped to a reading of 60.8 last month from 61.1 in September. A reading above 50 indicates expansion in manufacturing, which accounts for 12% of the US economy. Economists polled by Reuters had forecast the index would fall to 60.5.

The ISM reported 26 commodities were in short supply in October, some for as long as 13 straight months. That compared to 24 in September.

The economy is struggling with shortages across industries as global supply chains remain clogged. Supply constraints were worsened by a wave of coronavirus infections driven by the Delta variant over the summer, especially in Southeast Asia. Congestion at ports in China and the United States was also causing delays in getting materials to factories and retailers.

The motor vehicle industry has been the hardest hit amid a global semiconductor shortage. Transportation equipment manufacturers in the ISM survey said they had diverted chips “to our higher-margin vehicles and stopped or limited the lower-margin vehicle production schedules.”

Other industries are also hurting. Manufacturers of computer and electronic products reported “extreme delays” and that “getting anything from China is near impossible.” Food manufacturers said “rolling blackouts in China are starting to hurt shipments even more.” Makers of electrical equipment, appliances, and components said though demand remained strong, production continued “to be held back by supply chain issues.”

The ISM survey’s measure of supplier deliveries increased to a reading of 75.6 last month from 73.4 in September. A reading above 50% indicates slower deliveries. Economists and businesses expect supply chains could remain tight through 2022.

Longer waits for materials meant high inflation at the factory gate persisted. The survey’s measure of prices paid by manufacturers accelerated to 85.7 from a reading of 81.2 in September. Prices increased for 48 commodities last month, with only prices for wood falling. Prices for products like steel have increased for 15 consecutive months.

These higher costs are being passed on to consumers which, together with surging wage growth, is raising concerns that high inflation could be more persistent rather than transitory as Federal Reserve Chair Jerome Powell has repeatedly argued. The government reported on Friday, October 29, that wage growth in the third quarter was the strongest on record.

Fed policymakers are due to meet on Tuesday and Wednesday, November 2 and 3. The US central bank is expected to announce that it will start reducing the amount of money it is injecting into the economy through monthly bond purchases.

Stocks on Wall Street were trading higher. The dollar fell against a basket of currencies. US Treasury yields rose. The ISM survey’s forward-looking new orders subindex dropped to 59.8 last month, the lowest reading since June 2020 when COVID-19 lockdowns were in effect, from 66.7 in September. Factories have plenty of unfinished work.

“One interpretation of this dramatic fall could be manufacturers facing a shifting paradigm that accepts supply constraints as a new reality,” said Kurt Rankin, an economist at PNC Financial in Pittsburgh, Pennsylvania.

“Demand does not appear to be abating, raising the question of whether businesses’ patience and profitability potential is becoming exhausted and that new inventory management techniques and the promise of fewer goods on offer could be emerging.”

Factories hired more workers, with employment expanding for a second straight month. Though manufacturers said they were still struggling to find workers, there were hopeful signs.

According to the survey, “an increasing percentage of comments noted improvements regarding employment, compared to less than 5% in September.” It also noted that “an overwhelming majority of panelists indicate their companies are hiring or attempting to hire.”

This, combined with a jump in consumers’ perceptions of the labor market last month, suggests employment gains accelerated in October after the economy created the fewest jobs in nine months in September. Worker shortages, however, remain a constraint. There were 10.4 million unfilled jobs at the end of August.

The Labor Department is scheduled to publish its closely watched employment report for October on Friday, November 5.

A separate report from the Commerce Department on Monday showed construction spending dropped 0.5% in September, which was blamed on shortages and Hurricane Ida in late August.