US retail sales accelerate in strong boost to economy 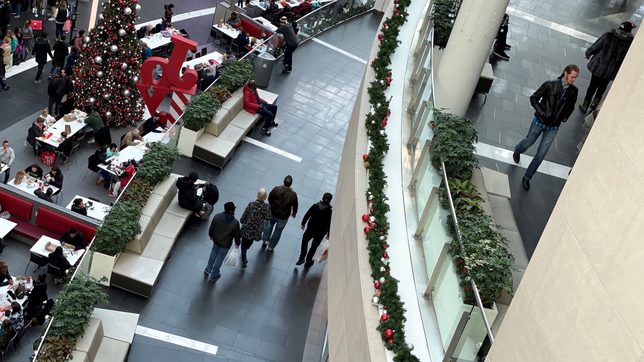 RETAIL SALES. Shoppers make their way through Fashion Centre at Pentagon City, decorated for the holidays, in Arlington, Virginia, December 23, 2019.

US retail sales surged in October, likely as Americans started their holiday shopping early to avoid empty shelves amid shortages of some goods because of the ongoing pandemic, giving the economy a lift at the start of the fourth quarter.

The solid report from the Commerce Department on Tuesday, November 16, suggested high inflation was not yet dampening spending, and added to strong employment growth in October and an acceleration in services sector activity in painting an upbeat picture of the economy after it grew at its slowest pace in more than a year in the third quarter.

“Strong gains in employment, wages, and wealth, as well as elevated savings for many households, have more than compensated for inflation’s hit to spending power,” said Sal Guatieri, a senior economist at BMO Capital Markets in Toronto. “For now, both consumers and the economy, in aggregate, look to cap the year on a high note.”

The broad increase in sales was led by motor vehicles, with receipts at auto dealerships advancing 1.8% after gaining 1.2% in September. The rise reflects an increase in unit sales as well as higher prices. Unit motor vehicle sales rose in October for the first time in six months.

The tight supply of automobiles because of a global semiconductor shortage has driven up motor vehicle prices. Receipts at building material stores advanced 2.8% and furniture outlets sales rose 0.4%. There was also an increase in receipts at sporting goods, hobby, musical instrument, and book stores. Sales at electronics and appliance stores rebounded 3.8%. But sales at clothing stores fell 0.7%.

Sales at restaurants and bars were unchanged despite an ebb in COVID-19 infections, driven by the Delta variant. Restaurants and bars are the only services category in the retail sales report. The nearly two-year-long coronavirus pandemic has caused an acute shortage of labor, delaying deliveries of raw materials to factories as well as shipments of finished goods to markets.

Retail sales are mostly made up of goods, with services, including health care, education, and hotel accommodation, making up the remaining portion of consumer spending.

Even when adjusted for inflation, retail sales rose solidly last month, leaving the pace of growth in consumer spending above the meager 1.6% annualized rate logged in the third quarter. The fading headwind from a surge in coronavirus infections over the summer is reviving economic activity. The economy grew at a 2% rate last quarter.

Hiring has been accompanied by an acceleration in wages as companies scramble to fill 10.4 million open jobs as of the end of September. But high inflation is wiping out those gains for some workers, which helped to sink consumer sentiment to a 10-year low in early November.

Still, economists do not believe the tumble in sentiment reported by the University of Michigan last Friday, November 12, will undermine consumer spending, noting that other sentiment measures were above early-pandemic lows. Americans amassed at least $2 trillion in excess savings during the pandemic.

“This continuing weakness in confidence does not warrant any immediate change to our near-term forecast for consumer spending since other factors are more important, particularly real disposable income, which is holding steady at a high level,” said Scott Hoyt, a senior economist at Moody’s Analytics in West Chester, Pennsylvania. “Support also comes from strong job growth, plentiful jobs, and abundant available cash for many.” – Rappler.com