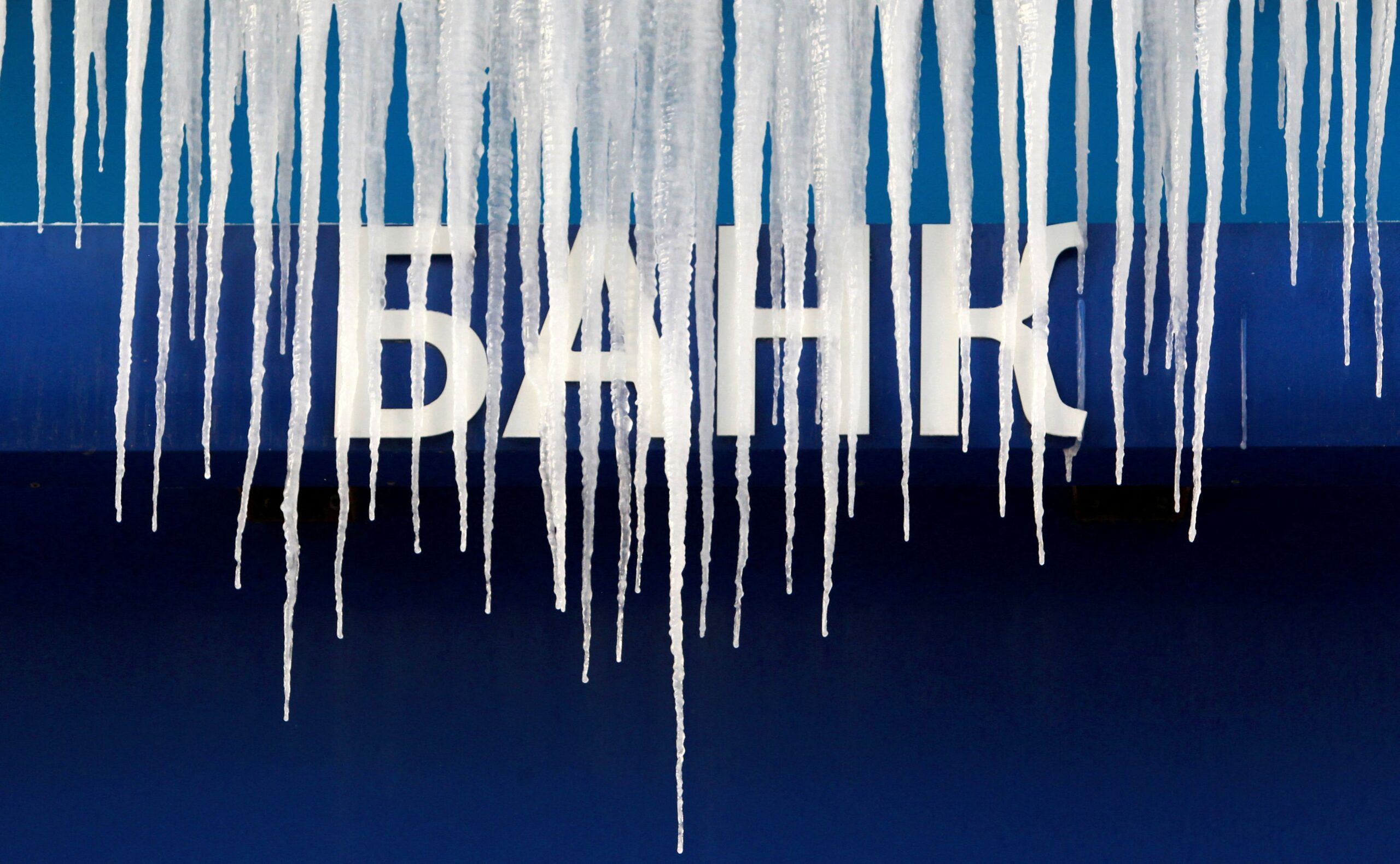 VTB. Icicles hang from a board displaying the logo of VTB Bank outside an office in central Moscow, Russia, January 21, 2013.

LONDON, United Kingdom – For NATO members, the most powerful measure against Russia were it to invade Ukraine would be US sanctions cutting off Russian state banks from the dollar, according to Russian executives, bankers, and former senior US sanctions officials.

The United States has warned that Russia could invade as early as this week. Moscow denies it has such plans but says the West needs to take its concerns about NATO expansion seriously.

Washington, and its allies in Europe, are finalizing an extensive package of sanctions if Russia were to launch an invasion, according to US and European officials.

The US package would expand a technology export ban to include any goods made with US components or software, as well as proposed sanctions against specific Russian billionaires. But sanctions experts say more than any other measure, aggressive action against Russia’s state banks would hit its economy the hardest.

“Banking sanctions are the most impactful measure the US can carry out in the short term,” said Brian O’Toole, a former senior advisor to the director of the Office of Foreign Assets Control or OFAC in the US Treasury Department, which designs and manages the implementation of sanctions.

Proposed sanctions against Russian banks would bar them from making any transactions in US dollars, essentially freezing any dollar-denominated assets or liabilities held by the banks at home and abroad.

Russian Finance Minister Anton Siluanov on Wednesday, February 16, said sanctions against Russian banks would be “unpleasant” and lead to a spike in volatility, but said the state would make sure that all deposits with banks and all transactions, including in foreign currencies, were secured. Russia’s abundant hard currency reserves – now at $635 billion – would help shield against the potential blow, he said.

When asked about possible sanctions on Russian state banks, Kremlin spokesman Dmitry Peskov told Reuters that Russia was “preparing for unpredictable actions” from the United States “by hedging against any risks.”

He said, “We could get the impression that all this information noise and all these claims that Russia is about to attack Ukraine are being made to further contain Russia and to create a reason to impose further sanctions – and so they are speaking about these hellish sanctions.”

Elina Ribakova, deputy chief economist at the Institute of International Finance in Washington, said even though Russia has enough reserves, the potential measures “could cause a run on deposits. It will definitely have a strong impact on the domestic financial system. It will raise the risk of financial instability including a widening of spreads and a sell-off of the rouble.”

US sanctions far outweigh the power of any other jurisdiction because the White House can potentially impose secondary sanctions on any foreign banks continuing to deal with these institutions, said O’Toole and Tom Keatinge, finance and security expert at the Royal United Services Institute, a London-based think tank. The White House did not answer requests for comment about secondary sanctions.

Shares in banking giant Sberbank and smaller rival VTB have both fallen in the past week on the prospect of sanctions, although recovered some losses after Russia said on Tuesday, February 15, that some troops stationed near borders with Ukraine were returning to base after completing drills.

Sberbank holds nearly half of Russia’s 21 trillion roubles in deposits and together with state lenders VTB, Gazprombank, and Rosselkhozbank accounts for nearly 60% of the nation’s banking assets.

Sberbank, VTB, and the Russian Central Bank declined to comment. Gazprombank and Rosselkhozbank did not respond to requests for comment.

“Taking out Sberbank would have massive ramifications,” O’Toole added.

The nature of the sanctions would likely hinge on the scale of a Russian invasion.

A Russian invasion limited to an incursion into the rebel-held Donbass region of east Ukraine for example, might mean the United States staggered its targeting of the Russian state banks in order to maintain further deterrence, potentially keeping Sberbank until last, said Daniel Fried, a former State Department coordinator for sanctions policy in the Obama administration.

But “if the Kremlin goes in big, so could we, and we might go in heavy in any case,” Fried said.

Russia has some defenses to withstand a US-led attack on its financial stability. The hard currency reserves, high oil prices, and a low debt-to-gross domestic product ratio of 18% in 2021 place it in a good position to weather a further tightening of existing sanctions, said Chris Weafer, director of MacroAdvisory, a Moscow-based consultancy.

In addition, Russian state banks curtailed their exposure to Western markets when the United States and EU imposed limited sanctions on VTB and Sberbank in retaliation for Russia’s 2014 annexation of Crimea, which restricted their ability to raise debt.

Today, the proposed state bank sanctions would include a system of waivers, licenses, and wind-down periods to ensure payments for dollar-denominated commodity contracts and debt payments could be made, the sanctions experts said.

Russian officials have largely focused on threats to cut off Russia from the SWIFT financial messaging system in case of war.

But US and European officials said last week this measure was now off the table due to concerns from European lenders that it could mean billions of dollars in outstanding loans they have in Russia would not be repaid.

Sberbank chief executive German Gref has previously brushed off reports that US sanctions could prevent Moscow from converting roubles into dollars on the grounds that he believed it was “impossible to execute.”

Two senior Russian bankers interviewed by Reuters said they expected any targeted bank to escape the worst of the impact by converting their dollar holdings into euros.

Former senior US sanctions officials, however, said this confidence was misplaced as the dollars would still have to ultimately go through a US clearing bank in order to convert them.

“Anything that is denominated in dollars has to clear through the US and once you do that it’s stuck,” said O’Toole.

These sanctions, he said, could also lead to freezes on dollar accounts held abroad by the Russian state banks in correspondent accounts, set up to handle funds on behalf of another bank.

Igor Yurgens, vice president of the Russian Union of Industrialists and Entrepreneurs, a powerful lobby group for Russian business, told Reuters the Russian central bank had been working on a program for correspondent accounts with China through which to convert cash that might help mitigate the impact of sanctions.

“Everything would be difficult, but it won’t collapse,” he said. The Russian authorities “have conducted technological stress tests and consider they will muddle through for a while.”

Sergey Aleksashenko, a former deputy Russian central bank chairman now living in exile in the United States, said he believed the West’s sanctions threats were no more than an escalating virtual, or information, war between Russia and the West.

In this standoff, “Putin’s weapon is [the movement of] tanks and the West’s is talk of sanctions. All of this is part of a great game,” he said.

But one of Russia’s top 50 billionaires interviewed by Reuters warned that the political maneuvering between Moscow and Washington could end up in conflict and economic reprisals. “Everyone has been playing a virtual game…. But then all these virtual events can become facts in life.”

“Sanctions will lead to serious economic consequences,” he said. – Rappler.com