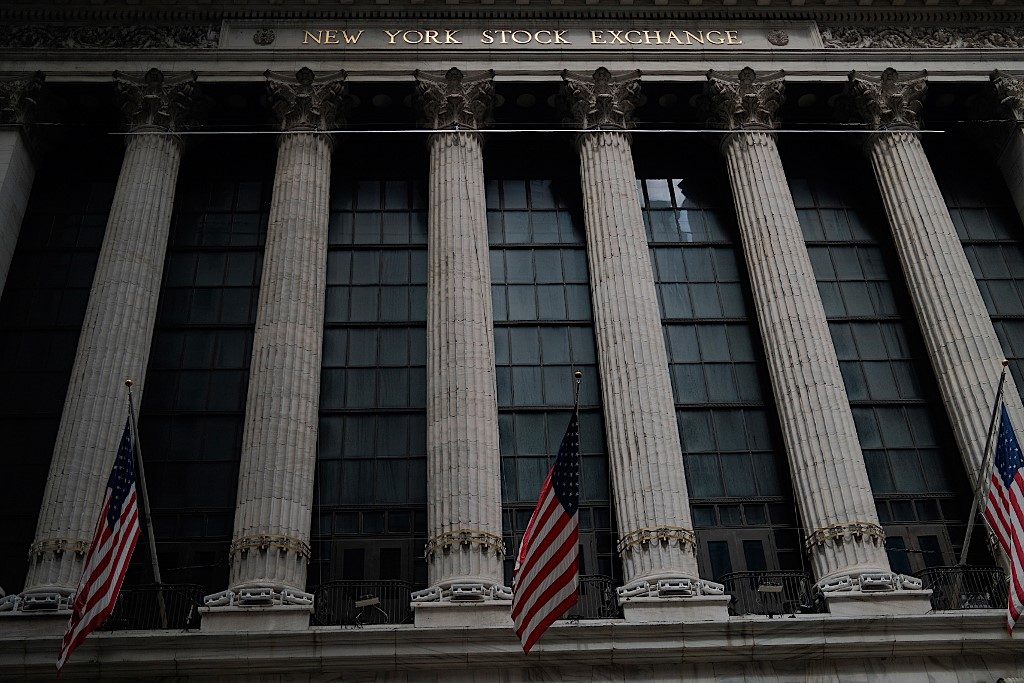 American flags are seen outside the New York Stock Exchange at Wall Street in New York City on July 20, 2020. - Wall Street stocks were mixed early July, 20, 2020 as markets awaited congressional debate on another round of stimulus spending and major earnings releases later in the week. (Photo by Johannes EISELE / AFP)

What form a new US spending package will take remained in doubt as the White House and Democratic leaders in Congress traded barbs and blamed each other for the failure to reach agreement.

President Donald Trump signed 4 executive orders over the weekend including one to defer payroll taxes, and another to provide $400 in weekly unemployment benefits, $100 of which will be paid by already cash-strapped states, to replace the $600 weekly payments that expired at the end of July.

Investors also largely shrugged off the latest back-and-forth between Beijing and Washington ahead of trade talks this weekend and after orders from US President Donald Trump restricting Chinese-owned social media giants TikTok and WeChat.

China on Monday sanctioned 11 Americans, including senators Marco Rubio and Ted Cruz, in retaliation to earlier US sanctions on a group of Chinese and Hong Kong officials – including the city’s leader Carrie Lam.

US Secretary of State Mike Pompeo said Monday he was “deeply troubled” by Lai’s arrest, calling it “further proof that the CCP (Chinese Communist Party) has eviscerated Hong Kong’s freedoms and eroded the rights of its people.”

Talks on the phase one US-China trade deal are set for this weekend.

“With trade talks – via videoconference – scheduled for Saturday (August 15), you’d think investors would be in a state of distress over the tinderbox situation between the two superpowers,” said market analyst Connor Campbell at Spreadex.

“Instead the markets were fairly blasé about a topic that has caused triple-digit losses in the past,” he added.

The developments have put the spotlight on Saturday’s meeting of trade officials to review their “phase one” deal signed in January.

National Australia Bank’s Tapas Strickland said: “The running assumption in markets has been President Trump needed the phase one deal to succeed (as much as China) this side of the November elections to secure the midwest” farming belt.

“At the same time President Trump is running a hard China line into the elections,” he added.