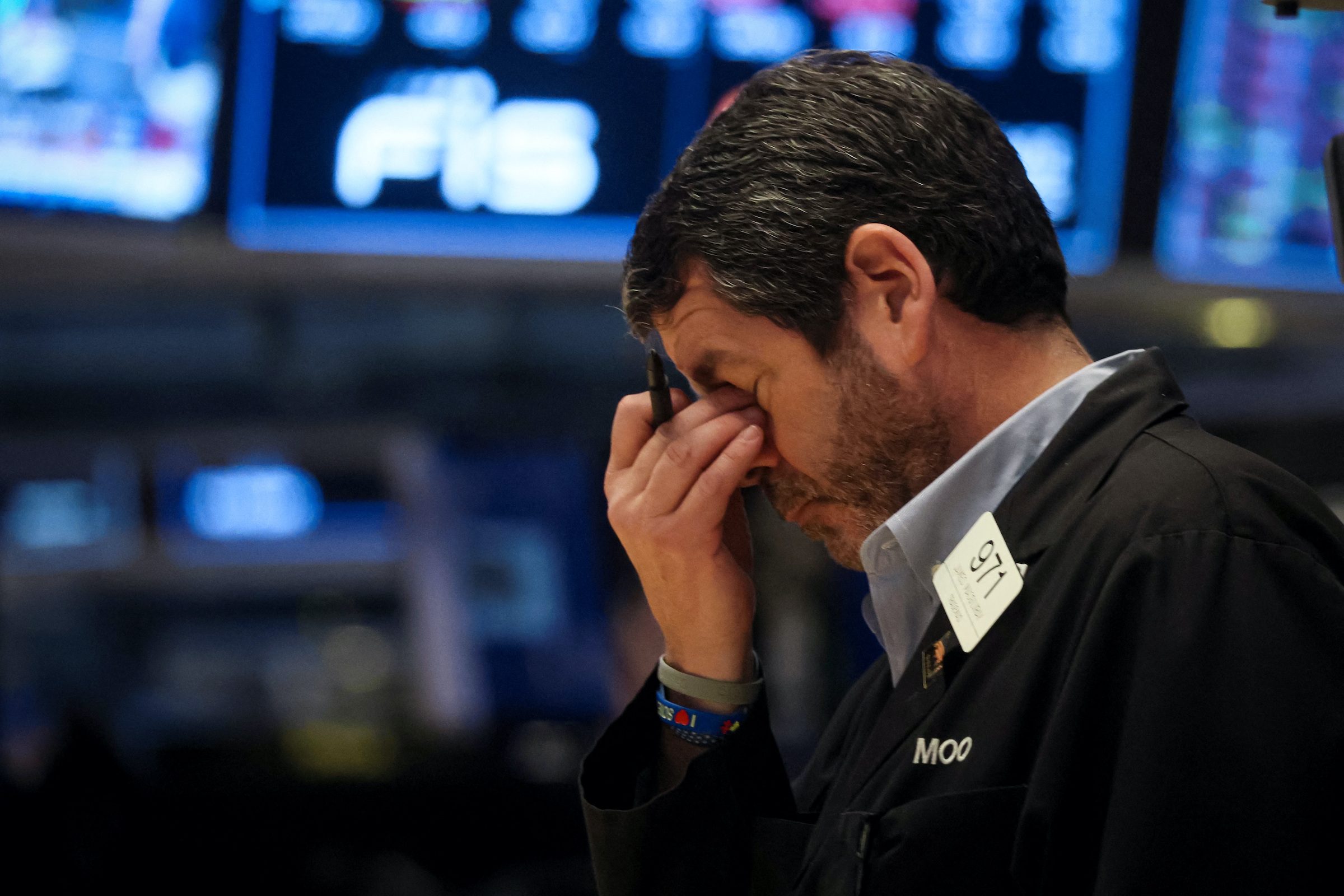 STOCKS. A trader works on the floor of the New York Stock Exchange in New York City, November 9, 2022.

Facebook Twitter Copy URL
Copied
Stocks in Europe and on Wall Street fall on Wednesday, November 9, as the outcome of the US midterm elections remains unclear

NEW YORK, USA – US stocks fell sharply and the dollar rose on Wednesday, November 9, as investors awaited both the results of the US midterm elections and key data on consumer prices that could impact the Federal Reserve’s policy on interest rates.

A deal for major cryptocurrency exchange FTX collapsed late in the session as bigger rival Binance said it was pulling out, news that heightened concerns about the sector’s stability.

Stocks in Europe and on Wall Street fell as the outcome of the midterm elections remained unclear as a better-than-expected showing by Democrats muddied the outlook for fiscal spending and regulation.

“After a few days of positive market performance, the fact that there’s some uncertainty about the midterm election outcome is resulting in declines today,” said Michael Arone, chief investment strategist at State Street Global Advisors in Boston.

“Markets crave certainty, they don’t have it yet.”

Stock markets have tended to perform better under a split government.

Average annual S&P 500 returns have been 14% in a split Congress and 13% in a Republican-controlled Congress under a Democratic president, according to data since 1932 analyzed by RBC Capital Markets. That compares with 10% when Democrats controlled both the presidency and Congress.

“The market is going to get what it wants: it’s going to get divided government. It means gridlock is the agenda item for the next two years,” said Anthony Saglimbene, chief market strategist at Ameriprise Financial in Troy, Michigan.

“It’s not going to seriously alter spending, but it’s also going to block any material increases in spending,” he said.

MSCI’s all-country world index shed 1.64% and the pan-European STOXX 600 index fell 0.30%. Overnight in Asia, shares had edged up as the election results first rolled in.

Walt Disney Company tumbled 13.16%, its biggest one-day decline in 21 years, after the entertainment heavyweight reported more losses from its push into streaming video, while Meta Platforms gained 5.18% after the Facebook parent said it would cut 13% of its workforce.

Investors cheered Meta’s decision to reduce spending, but a weak advertising market for the company points to a difficult economic outlook as the Fed hikes rates to tame high inflation.

Data on the US consumer price index (CPI) is due on Thursday, November 10, with economists polled by Reuters forecasting a decline in both the monthly and yearly core numbers for October to 0.5% and 6.5%, respectively.

Many in the market believe the US central bank can reduce its target lending rate if data shows inflation ebbing, but others see it moving “higher for longer” as Fed Chair Jerome Powell indicated last week.

“Clearly investors are hoping that the rate of inflation begins to roll over, and if that does not happen, I do think that causes some additional volatility in markets,” Arone said.

Federal fund futures show the Fed’s target rate will peak at 5.096% next June, indicating policymakers must hike rates by more than 125 basis points from their current 3.75%-4% range.

The yen weakened 0.45% versus the dollar at 146.36, after weakening overnight to 145.17, its lowest level against the Japanese currency this month.

Oil prices sank after industry data showed US crude stockpiles rose more than expected and on concerns a rebound in COVID-19 cases in top importer China would hurt fuel demand.

Gold dipped as an uptick in the dollar nudged bullion prices off a more than one-month high.