NEW YORK, USA – Global stock markets were mostly lower on Tuesday, September 6, while benchmark US Treasury yields jumped to their highest levels since June as a US services industry report underscored expectations the Federal Reserve will need to keep hiking interest rates.

The US dollar strengthened, while the Japanese yen hit a fresh 24-year low.

Wall Street’s three major indexes ended lower, led by losses in the Nasdaq, in the market’s first session after the US Labor Day holiday.

A survey from the Institute for Supply Management (ISM) showed the US services industry picked up in August for the second straight month amid stronger order growth and employment, while supply bottlenecks and price pressures eased.

The European Central Bank is widely expected to lift rates sharply when it meets later this week. The next US Fed rate decision comes on September 21.

The Fed is expected to raise the fed funds rate by another 75 basis points then, which would bring the range to between 3% and 3.25%. That is up from the zero to 0.25% band in March.

“You have all this fear that more rate increases are going to happen at the central bank level, inflation is not going to dissipate, and then you’ve got the quantitative tightening that’s coming pretty rapidly,” said Tom di Galoma, managing director at Seaport Global Holdings in New York. 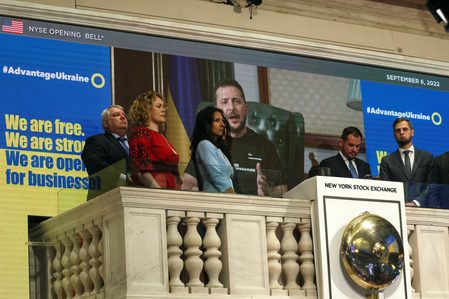 The dollar index rose 0.6%, while the euro was sliding again, having failed to get back above parity against the dollar. The euro was last down 0.27% to $0.9899.

Sterling, which has been one of the world’s weakest major currencies over the last month, edged up as Liz Truss’ installation as new UK prime minister fed expectations of a big energy relief package there. In energy, oil prices fell as concerns resumed about the prospect of more rate hikes.