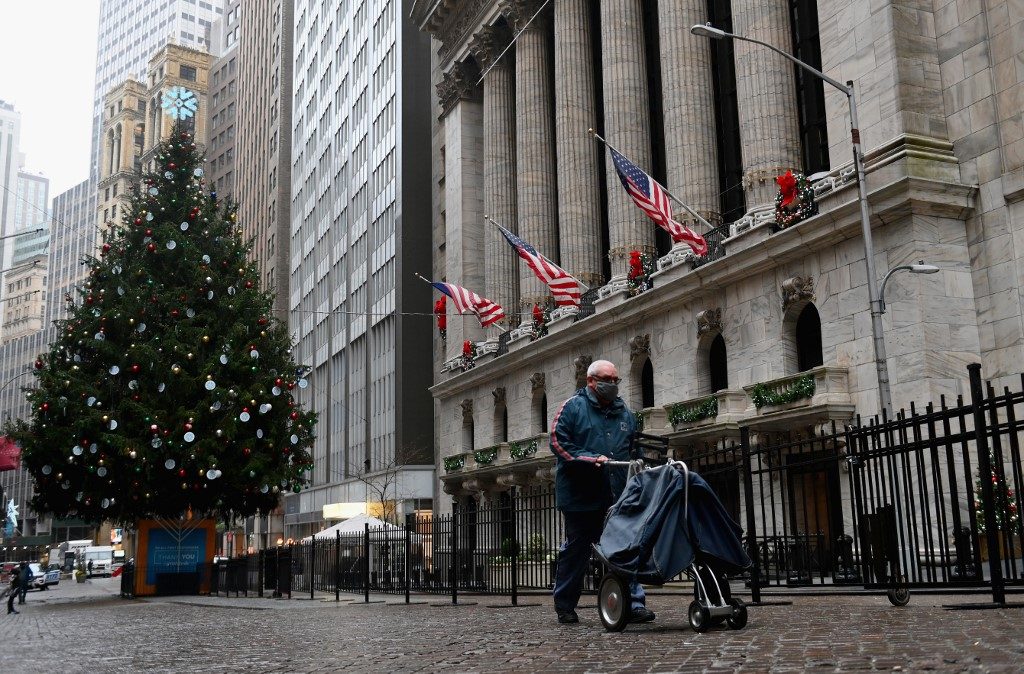 STOCK EXCHANGE. A mailman pushes a cart outside the New York Stock Exchange at Wall Street in New York City after heavy rainfall on November 30, 2020.

Facebook Twitter Copy URL
Copied
Wall Street loses steam on Monday, November 30, after recent record highs. But the Dow posts a nearly 12% gain for all of November 2020, making it the best month since January 1987.

Global equity markets fell back on Monday, November 30, as hopes that COVID-19 vaccines will soon be rolled out were overshadowed by fears of a coming surge in United States cases.

Oil prices remained under pressure as traders monitored an Organization of the Petroleum Exporting Countries meeting in Vienna amid worries producers won’t reach an agreement on an extension of the output cuts that have provided support for most of the year.

World markets have surged this month thanks to breakthroughs on vaccines, while investors have also been cheered by Joe Biden‘s US presidential election win and signs that incumbent Donald Trump will allow a smooth transfer of power, despite claims of voter fraud.

But Wall Street lost steam after recent record highs as the Dow gave up some 0.9%. The blue-chip index posted a nearly 12% gain for all of November, making it the best month since January 1987.

Earlier, Frankfurt’s DAX, having enjoyed a 15% rise on vaccine optimism across the month, limited its fall to 0.3%.

With at least 3 vaccines in the pipeline and approval in some countries said to be just weeks away, there is optimism on trading floors as dealers forecast an economic rebound next year.

“Vaccines offer the promise that the major disruptions of the pandemic will fade from the scene in 2021,” said Axi strategist Stephen Innes. “Economic life will gradually heal; the world will start to move on from all the human suffering that the virus has wrought.”

Indications that a surge in new infections in Europe looks to be slowing were also providing some hope, as Britain and France prepare to ease some of their lockdown restrictions.

‘Surge upon a surge’?

However, Trump’s top infectious diseases expert warned of a fresh jump in cases in the coming weeks after millions of Americans ignored scientific advice and traveled around the country for Thanksgiving.

“There almost certainly is going to be an uptick because of what has happened with the travel,” Anthony Fauci told CNN’s State of the Union.

“We may see a surge upon a surge” in 2 or 3 weeks in the run-up to Christmas, Fauci said.

Parts of Asia are also seeing new spikes, with Hong Kong leaders warning the city is entering a 4th wave, while containment measures have been introduced in South Korea and Japan.

Asian markets dropped at the start of the week, Hong Kong leading the losses with a 2.1% slide.

The pound rose against the dollar as Britain and the European Union try to hammer out a post-Brexit trade deal, with just weeks to go before the end of the transition period.