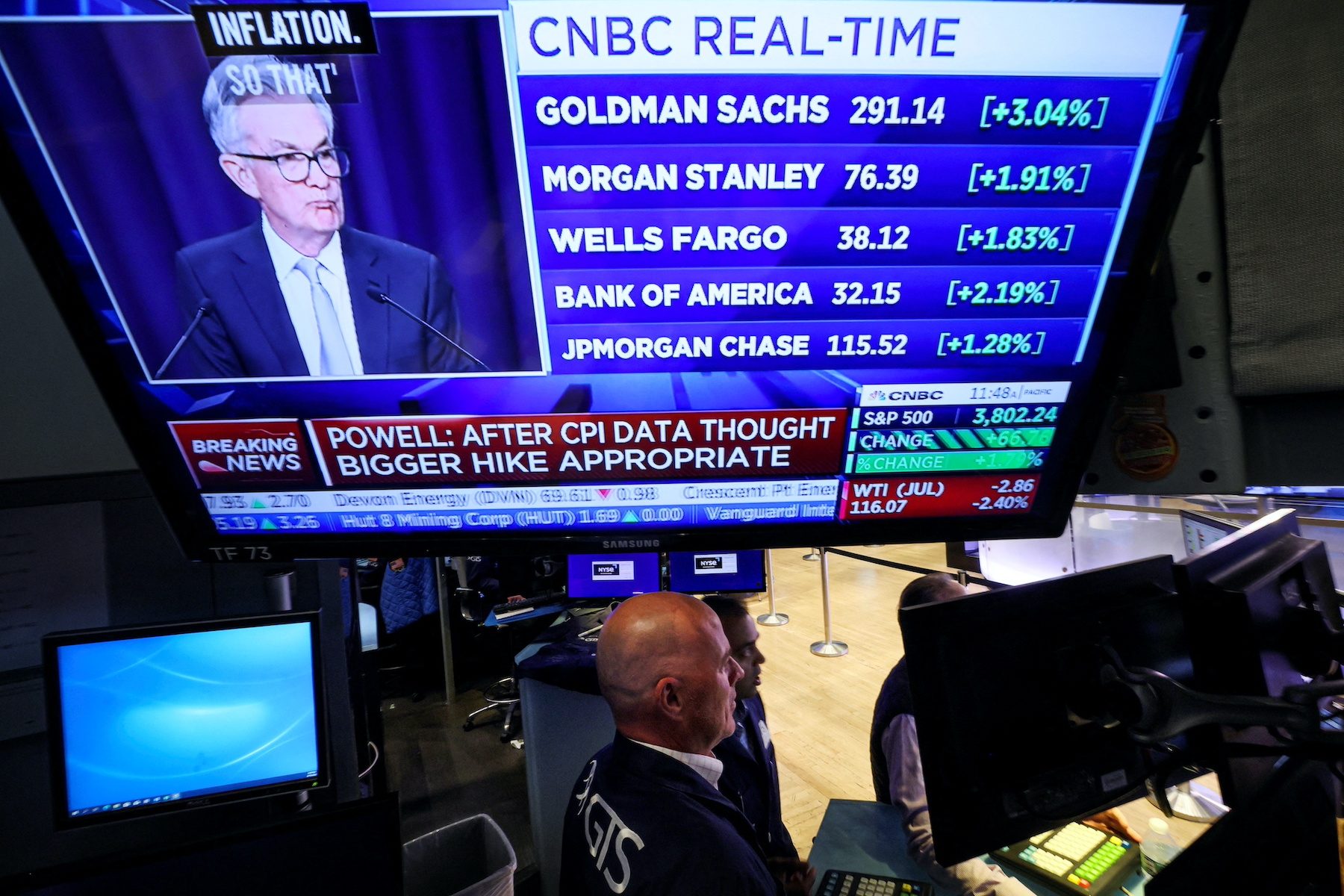 STOCKS. Traders work, as Federal Reserve Chair Jerome Powell is seen delivering remarks on a screen, on the floor of the New York Stock Exchange in New York City, June 15, 2022.

NEW YORK, USA – Global stocks rallied and government bond yields and the dollar retreated from multi-year highs on Wednesday, June 15, as investors cheered the Federal Reserve’s decision to raise interest rates by three-fourths of a percentage point, the biggest increase since 1994.

Investors seemed relieved that the US central bank had met the market’s expectations that it will act aggressively to tame surging inflation, and appeared for now to be comfortable with the Fed’s projection that the economy is likely to slow in the next two years.

Minutes after the rate hike that was widely predicted by the market, stocks had initially pared gains as investors worried about the prospect of tighter monetary policy tipping the economy into a recession.

But by late afternoon in New York, investors had cast aside growth concerns, and instead took the view that the economy was better off in the long run if the Fed succeeded in reining in prices now.

The buoyancy was reflected in global equities. MSCI’s gauge of stocks across the globe also zoomed up 1.10%, after hitting its lowest in about one and a half years earlier this week.

“Today’s move by the Fed to progress faster to neutral will be applauded in the long run by the economy, business decision-makers, and ultimately by markets,” said Rick Rieder, the chief investment officer of global fixed income and the head of the global allocation investment team at Blackrock.

The market’s relief that the Fed had delivered what it expected extended to Treasuries.

At a news conference following the rate rise, Fed Chair Jerome Powell said that either a 50- or 75-basis-point rate increase at its next policy meeting in July seemed most likely, and that the economy is strong enough to handle tighter policy.

“Whether or not we can escape this without a recession is coming into question,” said Ellen Hazen, chief market strategist at F.L.Putnam Investment Management in Massachusetts.

World stocks are down over 20%, bond markets have been routed, and fears that drastic Fed action could tip the world into a recession means the Fed’s moves later will be crucial for traders.

But global stocks and bonds had rallied on Wednesday before the Fed meeting, buoyed by a surprise announcement from the European Central Bank (ECB) that it will work to avoid a debt crisis due to rising borrowing costs by supporting high-debt member states, and devising a new tool to manage the risks.

Though some investors thought the ECB’s proposed measures were not bold enough, European shares jumped, and government bond yields in countries such as Italy, Spain, and Portugal – which will benefit from the ECB’s plans – pulled back.

Italy’s 10-year bond yield, which stands to benefit the most from the ECB’s plans, was last down at 3.91%, above its session low of 3.799%. Spanish and Portuguese 10-year yields also came off their day’s lows but were still sharply down on the day.

Given many US borrowing rates are linked to yields, financial conditions have already tightened markedly there even before the Fed hikes.

ECB chief Christine Lagarde tried to talk down expectations on Wednesday about how much the European central bank should do to avert a debt crisis, arguing that the ECB’s job is to tame inflation, not help budgets.

With Wednesday’s Fed rate rise already priced in by the market, the dollar index took a breather after charging to a 20-year high of 105.79 earlier in the day. By early evening, it was down 0.40%. That helped the euro to trim initial losses to stand flat at $1.04205.

Gold, which has taken a hammering from inflation and a sky-high dollar, rose as a softer dollar and a pullback in Treasury yields gave it some reprieve. It jumped as much as 1.4% to $1,830.31 an ounce in the wake of the US rate rise.

Oil was an outlier, and prices fell as investors worried that the Fed’s aggressive tightening could dent demand.

Oil prices stumbled after the Organization of the Petroleum Exporting Countries stuck to its forecast that world oil demand will exceed pre-pandemic levels in 2022.