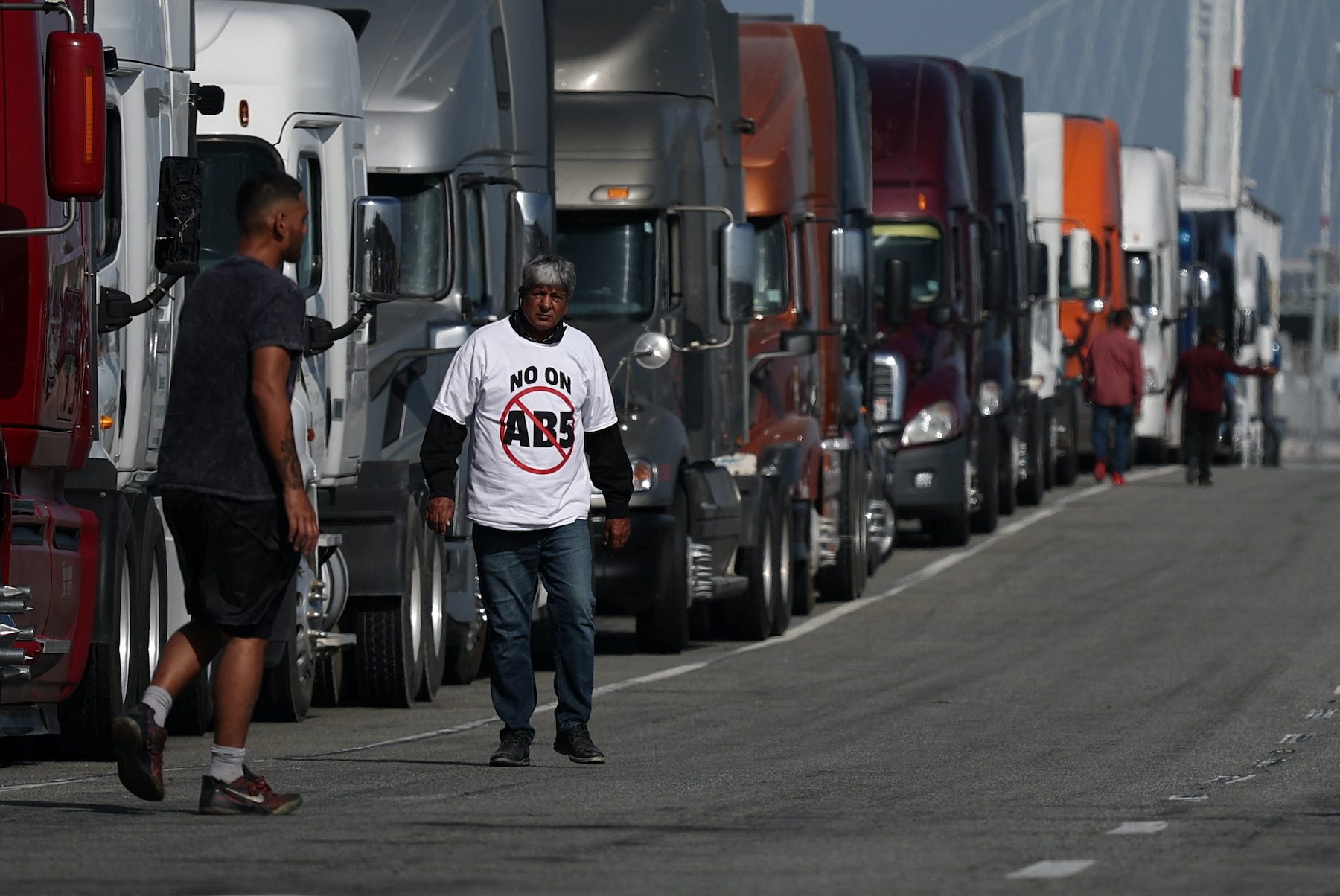 PROTEST. Independent truck drivers gather to delay the entry of trucks at a container terminal at the Port of Oakland, during a protest against the new law AB5 in Oakland, California, July 18, 2022.

LOS ANGELES, USA – Protesting truckers stopped traffic on Wednesday, July 20, at a Northern California port, one of the busiest in the United States, as they demonstrated against a new state labor law that makes it harder for independent truckers to operate.

Drivers picketed gates and blocked other truckers from hauling cargo in and out of the port. The protests in Oakland began on Monday, July 18, and have grown larger and more disruptive with each passing day.

Late on Wednesday, Port of Oakland Executive Director Danny Wan acknowledged protesters’ frustration with California’s “gig worker” law and warned that a prolonged shutdown would “damage all the businesses operating at the ports” and cause customers to shift cargo to rival seaports.

The protesters worry that the law, which could soon be put into effect, will impose hefty costs on them that will slash their earnings.

SSA Marine, which manages the largest terminal at the Port of Oakland in the San Francisco Bay area, closed operations on Wednesday due to the protests, which ground business at other marine terminals to a virtual halt.

Terminal representatives did not immediately respond to requests for comment.

Trucking industry legal challenges delayed enactment of the law for more than two years, but the US Supreme Court declined to review the case on June 30, clearing the way for it to go forward.

Backers, including the Teamsters and the ILWU, say AB5 aims to clamp down on labor abuses and push companies to hire drivers as employees – which would enable them to join unions and collectively bargain with employers.

Some 5,000 truckers work at the Oakland port, which is a major hub for agricultural exports including almonds, rice, and wine.

The protests in Oakland followed actions last week at the nation’s top two seaports, at Los Angeles and Long Beach in Southern California.

The three California ports handle about half of the nation’s container cargo volume. The trucker protests come as the ILWU, which represents dock workers at those and other US West Coast ports, is in high-stakes contract talks with terminal operators that employ them.

Protest organizers say their actions will continue until they get an audience with Governor Gavin Newsom, who did not respond to requests for comment on Wednesday.

On Monday, the Governor’s Office of Business and Economic Development said, “Now that the federal courts have rejected the trucking industry’s appeals, it’s time to move forward.” – Rappler.com