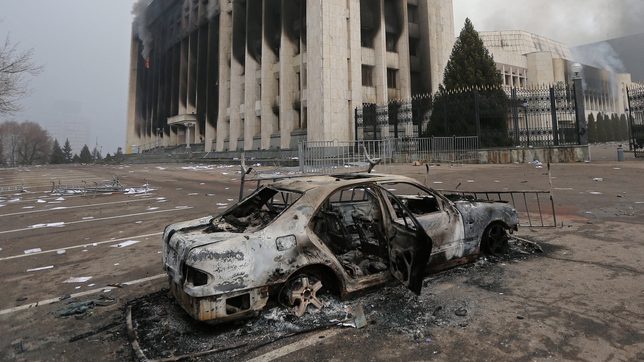 GUTTED. A burned car is seen in front of the mayor's office building which was torched during protests triggered by fuel price increases in Almaty, Kazakhstan, January 6, 2022.

ALMATY, Kazakhstan – Kazatomprom, the world’s biggest uranium producer, said on Thursday, January 6, it was operating normally with no impact on output or exports despite unrest in Kazakhstan.

Uranium prices have risen after unrest in Kazakhstan which was spurred initially by protests against fuel price hikes. Spot prices hit $45.5 per pound on Wednesday, January 5, the highest since November 30, according to a Platts assessment.

But the central Asian country‘s political turmoil does not seem to have so far affected key industries.

“Uranium mining is going according to plan, there have been no stoppages. The company is fulfilling its export contracts,” a Kazatomprom spokesperson said.

And earlier a spokesperson for the Caspian Pipeline Consortium, the group that transports the country’s main crude oil export blend, said it was operating normally. Production at Chevron’s Tengizchevroil venture also has continued.

Kazatomprom’s attributable production represented approximately 23% of global primary uranium output in 2020, according to the company’s website.

Kazatomprom’s London-listed shares clawed back some losses after the announcement, and by 1300 GMT they were down almost 3.6%. They earlier hit the lowest since end-September, adding to Wednesday’s 8% drop.

But shares in other uranium producers, such as Canada’s Cameco, are up nearly 12% so far this year. A uranium exchange traded fund from Global X was up 2% on Thursday at the highest since end-November. – Rappler.com