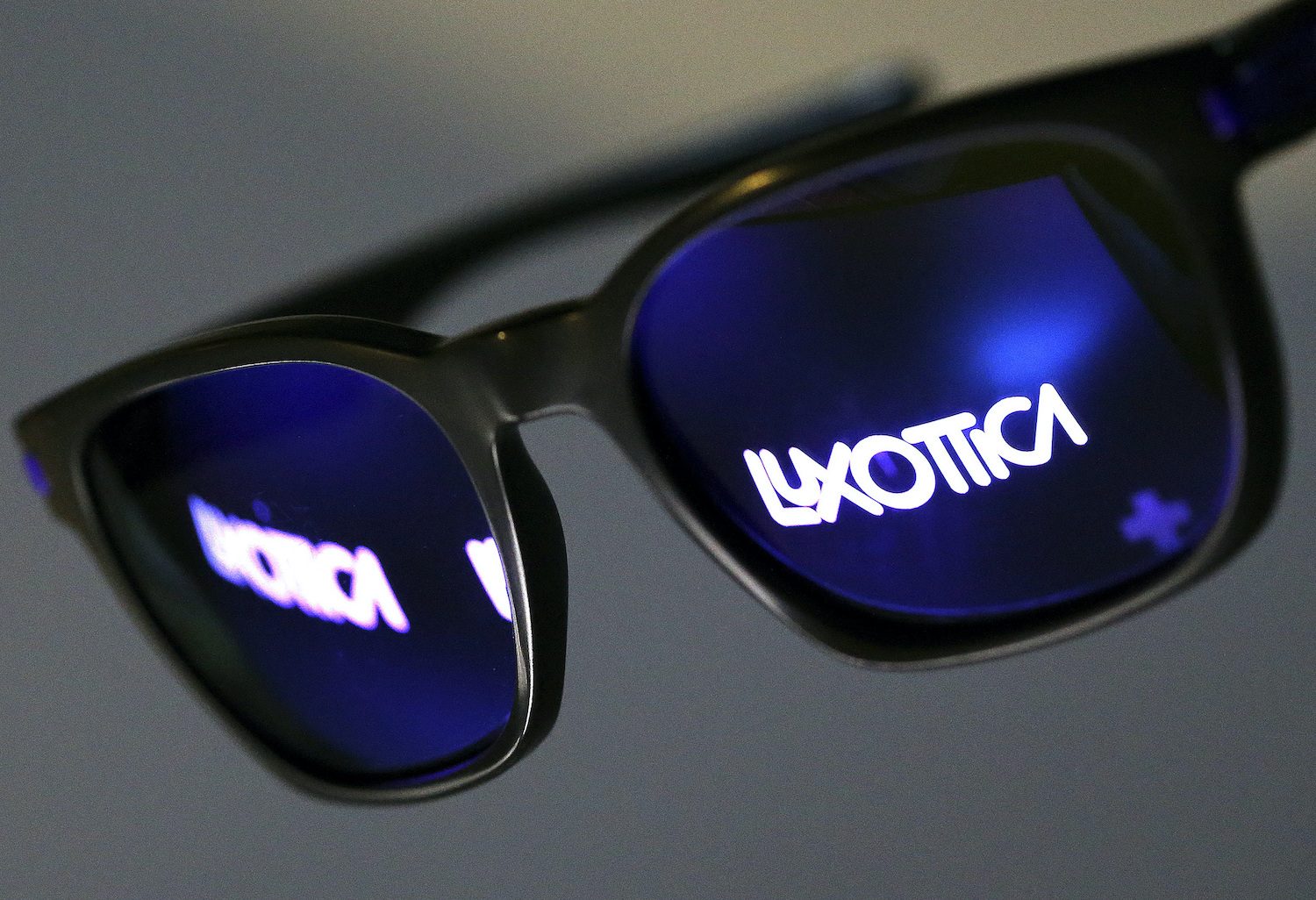 LUXOTTICA. The Luxottica name is reflected in a pair of sunglasses in this photo illustration taken in Rome February 4, 2016.

MILAN, Italy – Leonardo del Vecchio leaves a business empire worth 27 billion euros ($29 billion), ranging from the eyewear company that was his life’s work to the stake in merchant bank Mediobanca he built in his 80s.

Del Vecchio, who died aged 87 on Monday, June 27, was Italy’s second richest man, according to Forbes. His departure raises questions about the future of the various businesses in which his Delfin holding company was a leading investor.

Del Vecchio’s second wife Nicoletta Zampillo, whom he remarried in 2010 seven years after their divorce, stands to inherit his 25% stake in Delfin.

The remaining 75% of the Luxembourg-based holding company will be equally split among Del Vecchio’s six children – three from his first marriage, one with Zampillo, and two from another relationship.

Known to keep a strong grip on his business ventures, Del Vecchio held the voting rights relating to his children’s combined 75% stake in Delfin while he was alive.

To ensure all three branches of the family are on board in decision making over Delfin’s assets, the holding company’s by-laws stipulate a majority of 88.5% is required to approve deliberations.

“Del Vecchio knew his family’s situation was complex and, at least on paper, he did everything he had to do in order to prepare for the current circumstances,” Italian academic and leading expert on family-owned companies Guido Corbetta said.

Delfin’s main asset is a 32% stake in eyewear giant EssilorLuxottica, which Del Vecchio acquired in 2018 when he merged Luxottica, the spectacle manufacturer he founded in the 1960s, with French lens maker Essilor.

Del Vecchio recently amended Delfin’s by-laws to ensure he could designate a successor in the event he ceased to control over 50% of Delfin’s voting rights.

Expectations are that his choice was Francesco Milleri, Del Vecchio’s right-hand man who over the past decade has gone from an IT consultant at Luxottica to become the chief executive of EssilorLuxottica.

“The important thing for the family is to remain united to keep control over EssiLux,” Corbetta said.

Claudio, the eldest son born in 1957 and the former CEO of US menswear brand Brooks Brothers, lost his Luxottica board seat in 2015 in a management shake-up instigated by his father.

A longtime investor in bank UniCredit with a 2% stake, Del Vecchio also emerged in recent years as the single biggest shareholder in Mediobanca, of which Delfin owns 19.4%.

Over the past year, Del Vecchio also boosted his stake in Italian insurer Generali to 9.8%, siding with fellow investor Francesco Gaetano Caltagirone in a boardroom battle over leadership that also involved Generali’s top shareholder Mediobanca.

Concerns that Delfin could cut its financial stakes pushed shares in Mediobanca and Generali down 3% on Monday.

“And we’ll need to see if they’ll keep those stakes at their current size,” he said.

A person with knowledge of the matter said cashing in on the stakes was a possibility unless Milleri, as head of Delfin, secured the backing of the heirs, in which case he would keep up Del Vecchio’s fight against Mediobanca. – Rappler.com

Elon Musk had twins in 2021 with top executive – report