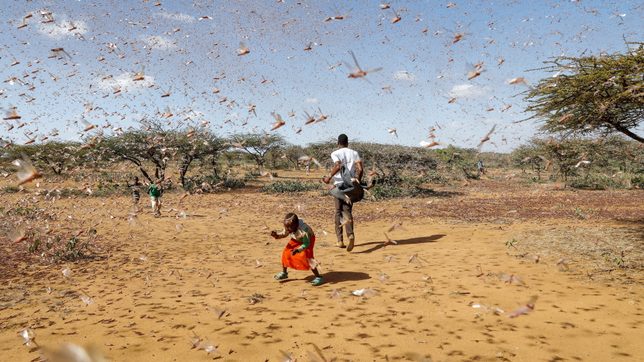 LOCUST INFESTATION. A child tries to chase away a swarm of desert locusts in Naiperere, near the town of Rumuruti, Kenya, January 30, 2021.

Climate change will force tens of millions of East Africans to abandon their homes within the next three decades, even if schemes to reduce its impact on the region are rolled out, the World Bank said on Wednesday, October 27.

People affected will include drought-stricken farmers seeking new arable land or different work in urban areas, and others driven out by the need to find clean water, the Bank said in a report issued four days before the United Nations COP26 climate summit begins in Glasgow.

Apart from a worsening drought in a region heavily reliant on agriculture, there was extensive flooding in 2020, while a locust infestation of historic proportions that began in 2019 continues to wreak havoc.

“Without broad, urgent action…as many as 38.5 million people could be internally displaced as a consequence of climate change by 2050,” said Hafez Ghanem, World Bank vice president for the region.

Concrete steps to reduce greenhouse gas emissions and fund climate change and adaptation schemes could cut the projected number of displacements, but only by 30%, the bank’s report said.

The bank has committed to ensuring 35% of its financing over the next five years will go to projects that will help address the threat of climate change, Ghanem said.

Rich nations promised in 2009 to deliver $100 billion a year for five years from 2020 to poorer countries to help them tackle the impact of global warming. But that funding program is set to be delayed by three years, COP26 president Alok Sharma admitted on Monday, October 25. – Rappler.com